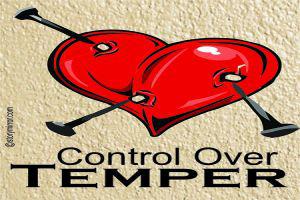 Kshitij was a pampered boy. Though all the other things were good in him, he was very short tempered. Quite worried due to his bad temper, his father thought of an effective way to tell him that control over one’s temper was very important and that going around with this habit was not good.

One day Kshitij’s father called him and handed him a bag of nails and a hammer. He told Kshitij that every time when he lost his temper, he should hammer a nail onto the wall.

On the very first day, Kshitij hammered 38 nails on the wall. Over the next week, the hammering had considerably reduced as Kshitij did not like what he saw. This exercise was very effective and in a couple of weeks Kshitij was in complete control of himself. One fine day, he did not have to hammer even a single nail.

Khitij was very happy that day and went to tell this to his father. Now his father told him to pull out one nail for each day that he was able to hold-back his temper. Several days passed by and finally Kshitij was able to remove all the nails he had hammered. Once again he went to his father and told him of his achievement.

Kshitij’s father came to see the wall. He looked at Kshitij, held his hand and said, “You have done an excellent job, my son. But can you see these holes on the wall? The wall will never be the same. This is exactly what happens when you say something in anger. It leaves a scar...a mark...a hole in someone’s heart and they can never feel the same for you as they did before they experienced your anger. Often times you even ruin your image and then people begin to avoid you. Ensure that you control your temper the next time you tend to say something in anger...for you might regret later.”