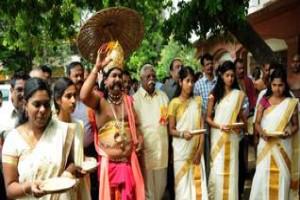 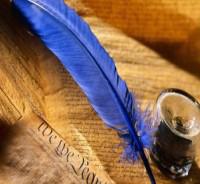 “Busy as usual, are you?” asked Lord Vishnu appearing amidst a stupendous poof of smoke at Pathalam. “Busier than earthly creatures, are you, my dear Mahabali?” smiled Vishnu at his favourite asura.

“My Lord,” Mahabali stood up in devotion with bowed hands. “Not at all. You have surprised us all with your visit. Kindly tell us how can we be of service to our Almighty Lordship?”

“Go my dear, Mahabali,” Lord Vishnu replied. “I had had forsaken you of your wish to visit your favourite place- Earth and your praja, the humans. I had kept you in this long exile of 20 years. I am really sorry of having held you back having given full- time charge of Pathalam.” Before Mahabali could reply, a wave of Lord Vishnu’s hand transported him to a totally different place.

Mahabali found himself at the midst of a crowded city. Thankfully, he noted that Lord Vishnu had made him invisible in addition to his deportation to Earth. To his shock, he found the Earthlings in the most ridiculous outfits. He stood there while it took a while to distinguish male from female. A crowd of humans strode off to clear Mahabali’s view to a hoarding, where beside his own image, it was written beckoning- ‘Special Onam offer- 25% discount on all items’ for curious looking articles that never resembled anything that could serve any pathalam-ly purpose anyways.

“Haare bhagwan,” Mahabali looked upto the heaven. “My image being used to advertise such devices? Goodness knows, what all are left to see. Eswara...”

Mahabali decided that being in the guise of a human man might help him to provide a justifiable view of his favourite place Keralam. “Oh how, tight fitting and uncomfortable these dresses are,” thought Mahabali pulling up his pants to see whether it could be loosened further.

“What are these things that you people put into your ears and hold in your hands,” quizzed Mahabali to the nearest person.

“Are you lost?” answered back the red- faced man. “Who are you and where have you come from? Haven’t you seen a mobile before?”

“Moffile?” said a flabbergasted Mahabali. “I come from Pathalam. We hardly need use such things at Pathalam.”

“But, I have seen men and women using it at Pathalam,” frowned the man looking at Mahabali with disdain.

“No, not at Earth, I mean the other Pathalam,” said Mahabali trying to settle the case.

“Really, I guess Lord Mahabali might himself come down, I suppose,” snorted the man with laughter. “Now, where does thine Lordship want to go? Look, I can show a place where you can take a bike on rent. But be sure to return the vehicle back to the owners. By the way, do you know how to ride a bike?”

“Of course, I do”, said Mahabali taken aback by the tardiness of the red- faced man. By saying that he was unaware of riding, he would have invited unnecessary questions and comments from other Earthlings. “Lord, what has come over the creatures of Earth,” thought Mahabali to himself. “Where have the basic rules of atithi- satkar vanished?”

Sooner, Mahabali found that he could ride the bike smoothly without any fear as his Godly powers provided him the expertise. “Hmm, this is quite cool,” said Mahabali to himself. “It’s better than the rides enjoyed by the Lords in their personal vehicles. I must appreciate my dear Earthlings for these, I must have had misjudged them.”

“What’s that's smell? Is is rotting flesh?” Mahabali swung his head round to see a huge dump of waste just beside the busy city road. Before his eyes could register further sights of the city, he heard a horrendous grinding noise and crash.

Mahabali stared open-mouthed as he realized that the bike-rider who was travelling just in front of him had collided with a massive overloaded vehicle. As Mahabali rushed to help, he saw blood and shattered glass and the poor bike- rider breathed his last.

The piercing sound of the ambulance steered Mahabali to action, as he helped others to lift the scarred bodies amidst the glare of the sun and the shock of the accident.

“Goodness, it’s so challenging to be a human male," mused Mahabali to himself. “I guess it would be a cakewalk to be a human female. At least they being the fairer sex, people would favour them and support their needs.”

Another poof transformed Mahabali into a beautiful, mango-eye shaped, white- salwar clad lady, Meenakshi. Meenakshi found herself in front of a railway station. Wondrously, she strolled into the platform and looked at the long queue in front of the ticket station. She could hardly guess the reason why few humans- both males as well as females, where gathered in front of these counters while few humans rushed towards platforms as a booming voice announced Your kind attention please: Train number 63039 Venad Express from Shornur to Trivandrum via Kottayam will arrive shortly on platform number one in three languages.

“Earth’s akashvani seems to be more sophisticated,” thought Meenakshi. “But what are these trains for and why would they arrive shortly?” In the next instant a mini- cyclone and a swirl of brown colour took Meenakshi’s breath away. As the endless bodied-van came to a grinding halt, Meenakshi suddenly acquired the curiosity of boarding the so-called train.

She stood beside one of the seats to the staring- eyes of her co- passengers. Slightly over- conscious now, Meenakshi drew the duppatta closer to her bosom. Her discomfort was slowly brushed away with the way the vehicle picked up speed while trees and bushes seemed to run away as she could see through the window.

“This seems to be much more cooler than that bike ride," muttered Meenakshi to herself. “I should think about implementing these mechanisms in Pathalam as well.” She turned around to see a huge black-faced man gazing in her direction.

A new-found womanly fear and discomfort started to creep up over her countenance. The same black- faced man seemed to stick uncomfortably close to her body. The next instant, she could feel his wriggling fingers trace their way up her bosom.

A terrified scream and another poof landed Mahabali in front of Lord Vishnu. “Bhagwanae," Mahabali fell at Vishnu’s feet. “I shall accept any task, but please don’t send me back to Earth.”

Vishnu looked with concern at His highly-regarded Aaura. “What happened Mahabali? I thought you were craving to visit your praja. I had thought it would be a good change for you. But what is this that I am seeing?”

“Dear Lord”, sobbed Mahabali. “It is out of great hazard that I have escaped. It dazes my senses how much Earth and Earthlings have changed. I am happier off in charge of Pathalam, he Prabhu. I take back my wish dear Lord.”