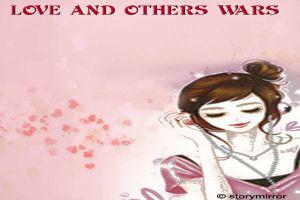 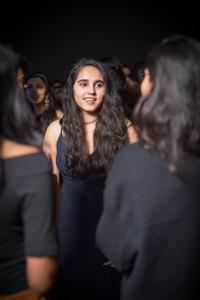 A song plays, Arya sits calm and solemn. Her mother had told her the song was by 'Beatles'. She had laughed, beetles? “You mean insects?”

No, people who sing give themselves names. Arya had thought it to be so dreamy, and imagined humans singing and dancing whilst in beetle costumes.

She didn’t understand the foreign tongue, just the music.

One day the symphony at home had suddenly stopped. The man who had gifted mama the disk had vanished too.

“Men both gift and steal your music Arya” her mother had warned.

Since then she decided to make her own music, create her own tune. She'd sing it in the washroom, stare at her face and think about the name she'd give herself.

No one can steal my music Mama.

She found rhythm in words, poetry in the world.

Arya' father had died mysteriously one night, with an illness whose name no one ever found out. Her mother had died soon after, confused with the voices of shame in her head. Only if she had ever made her own music, could she ever survive.

Shobit was twelve when he had found Arya staring at the sea.

'Those steady eyes on ocean tides wait for changing times.'

He had run away from home recently, distressed with the compact vision of his farmer father. 'Vision lies in art father, it lies beyond the obvious, it's the future in the present', he had tried explaining. His father being a widower and a man of practical needs only understood how two plus two made four, not why ancient coins sell for crores.

Shobit was taken aback when he saw her, she was more beautiful than the ocean itself. He knew she was to destro him.

He painted her in yellow that day, because only the sun could be more important than the ocean.

With the only two things he had got from his village home, his mother's last canvas painting and a brush, he decided to paint Arya every day. With meagre resources, he did everything a little boy could do to arrange paint. While begging on the street one day, a man with a hazy complexion asked him to paint his son. The man's sense of right and wrong was as blurred as his face. His son on the other hand was the sharpest little boy Shobit had seen.

Shyam's painting was fierce, and Shobit had even made Thakur sahab more defined than he really was. The careful omission of his most vital flaw made Shobit a hero in Thakur's eyes. 'This child is a genius', he proclaimed,'this child will be mine.'

Arya was placed in the house of a widow. The widow's husband had been a powerful landlord, but now there was never enough. To Arya it always seemed as if her mother was always fixing water leaks in an ocean.

William tried to keep Arya away from the material and into her.

"We are the cold ones Arya. We are ice, we have a heart but you cannot see it. We break but we are scared to melt, we die in our stupid battles. We protect ourself so much that we become stale. We're not meant to mix, we are separate."

He'd tell her something everyday. How to be, what to be. Arya hated it, he wasn't the smartest she knew, she told herself.

I can do everything myself, some painter in a shanty doesn't rule me.

Arya's mother pushed her towards society. Be an angel, you're beautiful. Laugh more, smile, bow, stitch. Be perfect. Her mother saw Arya's beauty as an escape. 'Make us rich baby, you're the only hope', her mother chimed.

Shyam was the one Arya was thrown at, and she had played him well. She seemed distant and mysterious. The first day she had talked about Shyam, Shobit had created her in red. Shyam didn't care for Shobit, he had hated the painting. For him it was either black or white. Though for some reason he never hated his father, he knew his mannerisms were awarded by money.

Arya saw everything, the hypocrisy and the liar's truth. She loved what Shobit hated.

Arya related incidents about her engagement to Shobit in full detail. She knew he hated it, the obsession had consumed him and her. She wanted to bleed him to death and then cry at his corpse.

'You're mad Shobit, I'll never come to you again! You'll be the death of us."

He crashed the green bottle of whiskey on her head.

He painted his canvas black.

It was as if she had never existed.

Her name was Silence.

Love And Other Wars