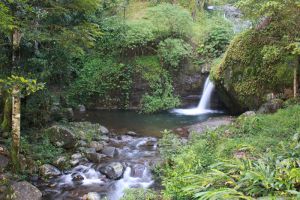 It was a Saturday morning and I was covered in my blanket in my bed. I was half awake and thinking of sleeping an extra hour as it was weekend. Then suddenly I heard my mobile ringing. God I hate it when that happens. With my eyes half closed I was searching for my mobile and I found it.

I answered the call and just kept my mobile near my ear and said nothing. ” Hello!!” said the person calling. His voice sounded like he was riding a bike or car and was trying to speak at the same time.

” It’s me Sam, Are you ready or not? “.I was really confused and don’t know what he is talking about.

” Hey are you there” asked Sam. I took a moment to recollect what he was talking about.

“O No! I completely forgot”. We had planned a trip for a trek in Cherrapunjee, 150kms from where I am residing now.

” Cool, pack your bags soon “, and he hunged up. For me it’s now or never, so I packed my bag and was ready to go.

My friends brought a convertible jeep and a bike. I was sitting pillion in Sam’s “Thunder Bird” bike. There was a relaxed feeling sitting behind the bike riding pillion.Watching all the greenery around, after months of struggling in this Corporate World. The hushed sound of the wind blowing in the face, you could only imagine how small you are in such a huge competitive world, and also realizing what all things you can achieve.

“When are we reaching the lake?” asked Richa, annoyingly.

“We four might have to spend the night in the woods.” suggested Shaun, pretending to find a way, through the rising mahoganies. As they rode through, they felt quite unattended by the serene woods around. The beams of the sun sieved their way through the dark canopies above. The calm winds dissolved the slow ounces of breath and whispered amidst the foggy woods, against a hilly backdrop.

But Sam has been trekking for a long time than any of us in our group. He knows every plant and trees, stones and rocks, sand and clay, good or bad … He is like Tarzan of our team. We totally trust him.

Suddenly, someone among us spotted a stooped figure, walking sluggishly beside the road. We stopped and realized it was an old tribal woman, perhaps as old as the hills around.The woman kept staring at the strangers with astonishment. The wrinkles on her face blended well with the scarred, hilly landscape. Her rough ungroomed locks spread over her face like growing tentacles and gleamed through her eyes filled with inquisition. She wore an old tribal outfit. Her slender hands revealing the veins in them, held a wooden bucket in each with water tumbling in them.

“How do we reach Nohsngithiang Falls?” a guy from the group asked sternly. His rough, forceful voice almost made her fragile hands drop the buckets. She replied in a tribal accent, “Nohsngithiang Falls is behind Kaalshikha hills, still a long way from here. You can get lost on the way.“ Her soft voice had a mild resounding effect on them. “I live near the hills, I can come along to guide you.” she said with gentle expressions.

One of the girls said to us,”We can’t afford to get lost again. Let’s take her guys.”

The others agreed, and the woman joined us in the jeep. She began guiding us through the narrow, serpentine roads of the terrain. One of the girls asked her on the way,  ”Why do you carry water from so far, when you live near the falls?”

The old woman replied calmly,” Nohsngithiang Falls is sacred to us. We don’t use water from there.”

As we rode through, the dark woods on both sides whizzed past. Suddenly, an open green mass of land was visible, with steep hills behind. “Isn’t that the base camp for trekkers?” a voice rang.

Suddenly a guy stopped us and asked” How many bikes and cars? ” and Sam told” 1 bike and 1 car” .It seems he is the man who is responsible for taking care of the vehicles. I figured it out that we will be in forest for two days with no contact to outside world. Even there would be no signal in mobile phones. So it was better to leave the bike and the jeep in his custody. And of all, Sam told he knows him and told us to trust him.

We parked our vehicles and started to walk, Believe me we had came nearly 400km from our home but the walking part is the most difficult for us, the old lady told it will take more than an hour to reach the spot.

And finally after twenty minutes of trekking we reached the starting point of the forest. ” Phew, that’s it I can’t walk further…” I said.

“It’s not far from here, take 5 minutes rest and than we will continue” said the old lady.

” Are you crazy. We all are tired, if we reach there soon we can take a bath in the falls and it will chill us off. Just gather some energy so that we can continue. ” Richa told in an angry yet convincing way.I was too tired. My body was sweating and evaporating as if i was boiling in hot water. My breath started to feel warm. I started to dislike this trip already.

” Here, let me take your backpack.” Shaun offered his help. I was feeling a bit better after losing some weight.

And after a brief amount of time I started to hear the sound of running water. But I could not see river anywhere because of the dense bushes. ” Are we there yet?” asked Shaun in a frustrated tone.

And the old lady replied,” Yeah we reached, just a few meters!” And then we walked along for a little bit and Sam suddenly started to cut through a bulk of bushes as though he was clearing the way for us. But actually that’s the actual spot. We all went through it and seriously I could not believe what I saw.It was a really awesome spot. Filled with running waters through a stream, and rocky yet a comfortable place to rest. And it was surrounded by two mountain tops. The place was surrounded by mist and a cold breeze.

We all settled down for some time. Me and Sam thought of trekking this picturesque valley and moved away from the group members and rest of our group was delighted with the mystic view of the falls, and they rushed for a dip into it.

They had left all their belongings on the shore, and moved to deeper waters. But to their utmost horror, the sand beneath, began pulling them down. Shaun and Richa splashed their arms furiously and screamed helplessly, drowned till their chests.The perilous sand beneath was dragging them, sluggishly into its depths. But the old woman stood unmoved, near the shore. Her eyes with dark, merciless delight inflicted the very souls of the hopeless figures.Their groans echoed around the deserted shore. .

Then the old woman started shaking her head vigorously, chanting some sacred mantras. Her face smeared with vermilion, her eyes grew wide, as she performed the evil ritual. Her arms and legs, shuddered frantically, as if responding to the Devil’s howl. The sinking souls watched the gruesome scene, tremling in horror.

Then she started hunting their bags. She brought out each object that was unknown to her, with a surprise. Among the things that she took out, was a mirror. She turned her back on the group and held it up, as if mocking the group, showing them their own slow death. She looked herself in the mirror for a while, then one by one took out all the money that the gang had brought.The gang now immersed till their necks, had their hands on the surface stuck up for help. She threw all the currencies over the lake near them, as if stating, no amount of money can save them from the peril. Lastly, she brought out an hourglass from their bag and placed it on the shore. The helpless group, now almost fully drowned, could barely rise to see the sand in the hourglass, sinking slowly, quite symbolic to the sands beneath them.  And in a few moments, the whole group went into the depths, unknown to mortals. The lake was still again.

Th old woman then took all that was of a value to her, dumped the rest nearby, and disappeared into the woods.

We, me and Sam, came to the spot where our group was camping near the falls. But to our horror we couldn’t find a brisk of our friends.The atmosphere which was filled with aroma, didn’t give the same feeling now. We started shouting our friends name but we never got any response.

We started searching along the shores and rock but we could only find their belongings and nothing else. We got scared and horrified because it was getting late and the sun was on the verge of setting. We took a decision to walk back to the place where we parked our vehicles, thinking our friends went there, after they came out of the stream.

When we reached our tents, we couldn’t find Shaun, Richa….

Sam went to the person who was incharge of the trekking in the area. He told what all happened the wholeday and he himself was terrified to hear about the old woman.

The incharge person told him about a same incident that happened couple of years back, where the tribal people said an old lady ate all the people in that group.

Often, a natural occurring unknown, unexplained to tribal people, take place of superstitions and religious beliefs. Likewise, the old tribal woman, not knowing the scientific reason behind a quicksand, believes a supernatural being “Nohsngithiang “resides in the falls and feeds on humans, who get dragged into its jaws. This story encourages the need to know scientific reasons before believing in wacky superstitions.