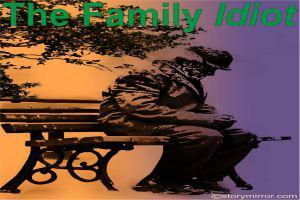 Till now, I have not understood why Uncle Sunder was called the idiot of the family.

Somebody once explained that he was the opposite of being Sunder (handsome), this man of slight build and protruding teeth set in a sunken face. But looks and idiocy often do not go together!

Another garrulous aunt told me that Sunder was a simple soul and believed in the words of the others. “That is the most idiotic thing! Believing what others say in this age!” she exclaimed, “He does not know people make fool of the gullible.” She was right in a way. But you have to trust people, howsoever bad. One cannot go on doubting everybody. If one does, chances of landing into a mental hospital are substantially increased.

Well, of course, a classic line of the Uncle Sunder!

With me, he was kind and caring. I enjoyed his warmth and generosity. He was ready to reach out and help anybody in crisis. I found him very intelligent and self-effacing man who loved every creature of God. An honest man ready to help the needy.

“That is the trait that confirms his idiocy,” The elder uncle often remarked. “Why should he trust everybody? Help them?”

The family never gave money to him because he would give that away among the poor. He was not allowed to sit in the shop alone---he would distribute groceries among the poor. The beggars were greatest beneficiaries. They would get free meals. Uncle Sunder would often share his own meals with a beggar visiting the locality during lunch time!

The family was fed up but could not change him. They finally gave up and saw to it that somebody always supervised him at home and outside.

There were many entertaining stories about him.

This one is the most famous and frequently recounted.

When Uncle Sunder was of 23 years, he went to a famous temple devoted to a goddess in the east of Delhi. It was made of the white marble and the idol wore a crown of gold. There was always a long queue of the devotees for the darshan of the goddess dressed in costly saree. Over the years, the temple’s credibility had grown fast and devotees came flocking from nearby places to pray for boons. The pious were granted their wishes.

That memorable morning, Uncle Sunder, a daily visitor, refused to go inside the temple, preferring to stay on the premises. A few minutes later, grandpa caught him talking to an old beggar woman.

“What you doing here?” grandpa demanded. “Why did you not come inside for the morning prayer?”

“I was talking to the Goddess.” Sunder replied serenely.

“Goddess is inside the sanctum. Not here.”

“No. You are mistaken. She is here. In this woman,” insisted Sunder, tone firm, eyes resolute.

The priest heard him and shouted to a throng of the believers. “Apostate. A defiler. He says Ma is this beggar woman.”

The crowd of angry believers gathered around Uncle Sunder and said, “Do not utter such a blaspheme again!”

“Why? The scriptures say Goddess lives in every human being, every atom.”

Uncle Sunder laughed and said, “Look close and you will find the face of divine Ma in this old and decrepit woman. I saw in her the face of the idol smiling. Look close!”

Angered by this stubbornness, the priest slapped the believer twice. Blood oozed out from his cheeks. He asked him to leave. “IDIOT!” The pot-bellied priest shouted angrily. The devotees asked him never to come again.

Needless to say, nobody ever questioned the man again for his beliefs!

Some called him a saint; others, an idiot.

The debate goes on till today…