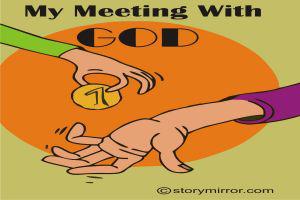 An innocent little boy who only knew that ‘God is the one who gives us happiness’, thought of meeting the God one day. He took a set of his dress and some packets of cakes with him before he commenced his search; and he set out for his innocent little journey to find God. However, he got tired very soon and sat down in the adjacent park.

He opened a pack of cake and began to eat. He had only taken the second morsel when he saw that a small old woman was looking at him. He realised that perhaps she is hungry too and so offered her a piece of cake. She felt obliged and took the cake from him with a smile.

The little boy was so charmed with her smile that he wanted to see it again. This was the most beautiful smile he had ever seen! So he offered her another piece of cake the moment he saw she had finished her first one. The woman smiled again and gratefully accepted the cake the second time as well.

The little boy was delighted. Both-the boy as well as the old woman were enjoying each other’s company so much that they spent the whole afternoon together. As the sun began to set, the boy got up to go back home. But before that, he went up to her and hugged her. The woman looked at him with immense love in her eyes, smiled once again, kissed him and fared him a goodbye.

The boy came back home looking very happy. His mother then asked him, “ You look immensely happy today. What’s the matter?”

In the mean time, the old woman also reached back home. She looked radiant with joy and her son was almost stunned to see the peace and the calmness with which she had entered.” He couldn’t stop himself and asked, “ What makes you look so happy today Mom?”

She replied, “ I had a meeting with little God today. I saw him with my own eyes and his mere touch eradicated all my aches. I felt relieved as his innocence gave me so much more than what this world has ever offered me.”

Many a times we underestimate the power of healing touch, a listening ear, smallest act that shows care, a smile, an honest compliment, a kind word all of which has a tremendous potential to give alife an altogether different perspective.

Remember, no one knows how God looks like. But there certainly are people who are ‘god-sent’ just to heal you, to comfort you and to give you happiness. What you need to do is understand who they are and accept them in your life to feel the eternal bliss.

My Meeting With God