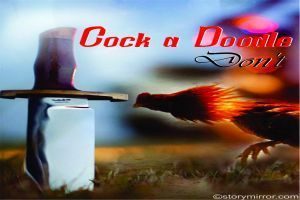 Rashmi and Akash had the perfect life. A lovely flat, a gorgeous daughter, well paying IT jobs, and an Audi in the garage. They were the envy of their family and friends. But life was about to throw a spanner in the works. The spanner was a chicken.

Rashmi’s boss called her in one morning to break an important news to her. She was to go to Atlanta on a key project for their biggest client for a year. Strangely, Rashmi didn’t even take a moment to give her consent. Her mother was keen to come visiting anyway. Her only problem was Akash. A whole year away from him and Ashu……hm…..could she? Akash put her fears to rest that night. Holding her in his arms he looked deep into her eyes “Go darling, they’ll give you a hefty raise and it will all be worth it. I will handle Ashu.”

Cut to today. One morning, grandmother and Ashu were looking down from the first floor balcony. She saw a vendor with colourful little birds in a wicker basket. Ashu’s eyes lit up at the sight of them. Grandmother asked her if she would like to have one. Ashu was ecstatic and nodded vigourously.

So the household had a guest. Ashu followed the fluffy pink fellow all over the house, took care of her feed, and made a bed for her using her Barbie stuff. Six months went by. Rosie, Ashu’s name for it, was now big and started sprouting pulpy stuff on its crown. It was a rooster! Akash had a good laugh when he discovered it at the dining table and asked Ashu, “Sweetie, you know that a rooster is a boy, right? How can it be called Rosie? It is so girly!” Ashu had nothing to say. Her sad face said it all. So the name stayed.

Rosie started doing what roosters do. Droppings all over, making a mess, creating a riot of crowing. Things were getting out of hand for Rashmi’s mother and the maid. Akash, till now a rather detached father, had to step in. He announced “Okay, it is settled, Rosie has to live in the guest bathroom.” Ashu face shriveled. But Akash had decided and that was that.

The year was nearly up. The household was restless and messy, thanks to Rosie. I miss Rash, Akash sighed. Unconsciously he dialed her number.

The moment Rashmi received his call, he was assaulted by an announcement in German in the background. “Hello?” he said loudly. “Hi, honey! Wassup?” Akash barked “What are you wassupping me for? You haven’t told me your plans for long. Your Mom and daughter are driving me batty. When are you coming? And why do I hear German in the background?” A pause. “I’ll see you in eight hours. And thanks for spoiling my surprise.” Akash couldn’t believe his ears. In that moment, he could feel Rashmi’s skin on his, her lips on his and her perfume in the air.

Rashmi’s return was a celebration for the whole family. A jabbering Ashu, a fawning mother and a relieved Akash.

Akash caught Ashu’s eyes and gestured frantically, pointing to the guest bathroom. Ashu got the hint and her eyes lit up. “Ma, I have a surprise. Come.” She started to pull her mother to the guest bathroom. The almighty assault of stench hit Rashmi. Ashu called out “Rosie!” The rooster strutted out. “We have had it for seven months. Ashu loves it.” Akash tried his best to make the situation homely. “And everyone is okay with the mess and the smell?” Instantly, Rashmi’s reaction had set the tone for the next few months. The fact that she didn’t like the idea one bit was clear as the day to everyone, even little Ashu. As they sat for dinner Rashmi tried to make the atmosphere light by recalling some incidents of her stay in the US.

Days later the boat got its first shake. Her maid, Padmini, loyal for years, came up to her one morning. Now, Padmini normally would never do that. Rashmi immediately knew there was something wrong. “Memsaab, I waited this long for you to come back to tell you. I can’t work here anymore. The bird, memsaab,……..” she trailed off. Rashmi was downcast. Padmini had been quite a support to her – good at her work, non complaining, good natured. “But my niece is willing to come. I will talk to her.” This was classic Padmini, never cause pain without offering balm. The niece, Asha, came the next day and Rashmi took her through the drill. So the household had a new maid.

Two weeks went by and the new maid Asha upped and quit blaming the rooster. Rashmi was exasperated. She was crying on one side and seething on the other.

Monsoon set in slowly on Gurgaon. It drizzled for days without a stop. This had an altogether unexpected effect on the household. The wet walls of the bathroom made the stench severe. What’s more, it seemed to spread to the rest of the house.

One day, Rashmi strode into her boardroom for an important regional con-call, and one of her senior colleagues, a notorious flirt, said “Wah, Rash, new American perfume, what?” Rashmi stopped short and took a whiff of the air. She reeled as the rooster stench assaulted her. She handed the con-call job to her project manager and excused herself. She picked up her bag and stormed out of the office, got into her car, and screeched out of the parking lot.

Rashmi had made up her mind. The rooster had to go. She drove rather dangerously while calling Akash, who didn’t receive her call.

As Akash came home Rashmi gestured to him urgently to come up to the bedroom. “The bird has to go!” The finality of this statement made Akash take a step back. “First the stench around the house, the mess, the maids and today, my colleagues complimented me on my new perfume!” she burst out. Akash hugged her.

They sat out in the balcony. “Any ideas?” Akash was quiet. “We could take it to the river and let it free!” His suggestion was cut short with venom. “No, I want that damn bird finished” said Rashmi. Her tone implied a pathological hatred for the bird, a hitherto unknown sentiment. Over her tea, Rashmi’s mind was running. Just then her eyes lit up. “I am going to send Mummy and Ashu away to Dehradun, and I am going to raise a supari on the bird.” Akash, normally an easy going sort of bloke, jerked at her, his eyes wide open. “Well, I can’t do it, you softie definitely can’t do it. I am going to get Padmini’s husband to do it. That way I will have the bird gone and Padmini back. Two birds with one stone……..what?” Akash had to admit it was a genius of a plan. Ashu could be fed a story of the bird having flown away. Rashmi was missing Padmini dearly. This solution seemed as perfect as perfect gets.

Soon mother and Ashu were on board the bus en route to Dehradun. Rashmi called Padmini. She asked her to come home with her husband in the evening for an important job.

Padmini’s husband Ganesh, listened intently to Rashmi’s plans. “Don’t worry madam, it will be done!” Rashmi was relieved. She asked Ganesh to come at 6am next day.

In the morning, she got Ganesh to grab the bird from the bathroom. She had a large gunny bag ready in which the bird would go for the drive. Rashmi knew the fringe of a foresty patch next to the river bed, which was isolated. Rashmi gave him an evil smile as she drew a shiny kitchen knife from her purse. Ganesh looked at Rashmi with new regard, took the knife and went around the trees.

Without as much as a fuss, Ganesh finished the job, gunny bag under his arms, came strutting back to the car. The sense of relief was too intense for Rashmi. Hugging Ganesh would have been inappropriate, she knew. She almost wanted to dance and sing. She wanted Akash badly. She dropped off Ganesh at the bus stop and drove home. Akash may not have left for work yet, she could catch him. Akash was just finished with his bath as she barged into the bedroom and closed the door. The tease in her eyes was obvious. With a girlish giggle she lunged and pulled off the towel wrapping Akash. She was so playful and so happy, Akash immediately knew what was on her mind. “Let’s both call in sick and go celebrate!”

Over a celebratory coffee on the terrace of the trendy neighborhood restaurant, she put through a call to her boss. “Boss, you will have to excuse me today. There has been a death in the family.”