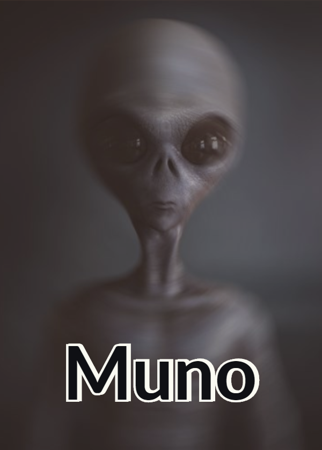 “Hey there! Can you hear me? Who are you? What’s your name?” - cries Ramulus, as he approaches the stranger.

The stranger steps back and stares at Ramulus.

Soon, the three approach the stranger together. Maholus asks innocently, “How is he wearing a helmet and a suit in this heat? Why? I feel hot even when I’m having nothing on!”

The stranger cries again, this time in a shriller tone, “Muno, Muno, Muno”.

The three get closer to him. The stranger points towards the sky and shouts, “Muno, Muno, Muno”.

It’s 6 o’clock now and the sun can be seen slowly hiding behind the tall trees in the forest.

Soon, night falls. And the three of them are joined by a couple more. They all look excitedly at the stranger.

Jankila brings some freshly cut mangoes and bananas on a large leaf. She asks Ramulus to offer the food to the alien. The alien eats nothing, keeps on shouting and pointing to the sky, “Muno, Muno, Muno”.

It’s now 9 o’clock. The jungle folks are tired, exasperated. They are huddled together deep in conversation, trying to find a way to communicate with the friendly stranger, to understand him, help him.

Suddenly, there is a loud whirring sound and lands almost in a magical moment a space vehicle. Steps out of the vehicle a family of three. Maholus cries, “Helmets, helmets!”. The stranger rushes toward them and hugs one of them, tears welling in his eyes, “Muno, Muno, Muno”.

The female voice replies in an emotional

All four get into the vehicle which disappears into the sky.

Ramulus finds an earthen pot at the place where the alien had been standing. He and Maholus break it upon.

There is a picture of Jankila and Kushalus, and 1000 gold coins beside it.