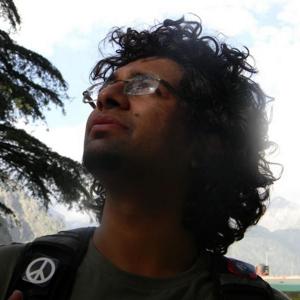 He watched his step as he took the moss covered stairs, balancing the tea to avoid a spill he carefully maneuvered further through the slippery grass, there was a bounce in his step as he was enjoying the damp smell of soil.

Earth had finally held its own and wasn’t getting any weaker by the rain, but in the battle of the elements, water had won, literally through a land slide.

Vivek made his way to the right side of the stone slab. “Here.” He said announcing himself with a mumble as if not to wake the weeds growing around.

The wrinkly index finger met the handle of the cup even though his eyes did not, stretching the other index finger Arvind pointed towards a dark brown, muddy, flat patch on an otherwise green hill.

“Told you it’ll go down!” said Arvind while adjusting the bridge of his horn-rimmed glasses.

He let the sheepish smirk hang on his face as he took the first sip of the aromatic tea.

“Hey!” an almost immediate protest from Vivek startled him. At his age anything out of the ordinary would alarm his senses.

With tightened eyebrows and a question in his eyes Arvind stared back, it took him a while to comprehend that he had forgotten to follow the ceremony of clinking the cups before the first and the last sip.

He did the needful, though with a parting shot.

“That time of the month for you?”

“Hey!” Vivek protested again as both of them began to giggle, enjoying the warmth of tea in between laughs.

The sinfully sweet, cardamom-ginger flavored tea had been the corner stone of their three month long friendship, that and the betting.

“So I win again, tomorrow’s tea on you. That’s three in a row, get your act together kid.” Concurred Arvind jubilantly.

“Oh I will old man, don’t you forget I still hold the longest streak.” Came back Vivek sharply.

The jibes continued as the cozy beverage balanced the chill that July rains brought along in the hills.

Placed a few meters away from the tin tea shop in Mashobra, they had their usual sitting place as there were few takers for the shabby stone slab.

Mashobra was a small hamlet away from the noise and limelight of the touristy Shimla. The placid town had little but time to offer.

“So Arpita hadn’t been returning messages earlier, now she’s stopped attending calls too.” A partially dejected Vivek announced. “I think she’s cross on the fact that I am yet to book my flight back to Mumbai.”

“And what sign of God are you waiting for?” inquired Arvind

“I like it here, I miss the lack of this place. You don’t know what it’s like out there, I feel as if I am in virtual reality. The day doesn’t seem to be of twenty four hours by any stretch of means, the streets are always loud, the food usually bland, manipulative coworkers, a four to five hour sleep is a luxury I can’t usually afford, I even hate the rains there.

After a while you stop trying to adapt, and that is where the incessant complainer in you is born. Complaining to himself, trying desperately to be his own ombudsman.

Anyways why are you complaining? Getting tired of all the free tea are we?” Vivek concluded, making a bunny face to mock Arvind.

“I never get tired of tea, Samita has tried to inflict her passion for organic tea on me, who in their right frame of mind would ever enjoy milk less tea?

When your auntie gave birth to her I knew she would be my favorite out of the three, she was the first girl and the youngest.

I tell you Vivek,   if there’s someone you love more than your mother, it’s your wife, and if you love someone more than your wife it’s your daughter and so on. This is the perfect reverse hierarchy of love, and its gender specific as well.” Stated Arvind with a smile on his face.

“So you’re not allowed milky sweet tea at home?”

“Of course not, why do you think I sneak out every day when she’s off to her yoga class?” replied Arvind

“There’s no more fun as an hour stolen discreetly from the world.” Said Vivek

They sipped stingily to make the cup last longer.

“When you go to Shimla tomorrow do me a favor and pick up an atlas from Minerva Book Store, ask for Robin, he knows which one. And buy a coffee cake for Samita. The Atlas is for Urvashi, it’s a special one that shows the changing boundaries of the countries over the years. Urvashi turned 7 last week and I forgot her birthday, she’s been pressing me for a gift since.

And buy yourself a chocolate square for your troubles.” Said Arvind

Without an iota of hesitation Vivek pocketed the envelope, even though his tryst with the financial world had given him a decent bank balance, he still liked to mooch off at his tea buddie’s expense, it always made him feel like a kid, something that he hadn’t felt for a long time.

They clinked their cups before the last sip again, deciding on the bet for the next day. As they looked at the mighty mountains, the mountains looked back at two friends sitting on the edge of a stone slab with cups resting in between, one with a slouched back weighed down proudly by the years, the other sitting upright enjoying the serene peace which was disturbed only by the usual noise of some crickets.

Sitting next to the foot of the bed Vivek was catching the view through the window, the small bulb was lit as the sun was going down, there was a stack of books, an old chord phone, some pens and spectacles on a mahogany table which looked like it had seen better days, the smell in the room was a little stale.

Being the first day that Arvind had missed the tea ritual, Vivek knew that something was wrong and decided to drop the atlas and the cake himself.

He heard the bed squeaking as Arvind turned, in his head he couldn’t decide whether Arvind out aged the bed or was it the other way around.

After waiting for an hour he picked up a pen and a paper and started writing.

‘Got the atlas and the cake, missed you at tea. Arpita hasn’t called up as yet but there are still five hours till the day ends.

He left the note on the table under the spectacles and tip toed his way out of the room.

At around ten the next morning, Vivek paid his friend another visit. Arvind looked better but was still on the bed.

“Get up, you’ve been asleep for far too long.” Vivek announced himself boisterously.

Arvind got up in a flash and fired back with a question that had been bugging him for the past two hours as he had been half asleep “Did she call?”

Crestfallen, Vivek started nodding his head sideways like a pendulum.

“So that makes it four! Just one win away from matching the streak!” Rejoicing his triumph Arvind punched the air in excitement.

Hearing the ear splitting noise, panic struck Samita ran towards her father’s room, as she saw him healthy and happy she wiped of the sheath of sweat from her brow and calmed down her pounding heart and asked if they’ll have any tea.

As she moved out of the room she could hear her father enjoy a hearty laugh.

Seeing Vivek a little out of sorts Arvind decided to shed some of his wisdom of the years.

“You know what Vivek, till a time life gives you things and after it, it starts taking it back.”

“God gives you happiness in infinite ways, along with it, life gives you the chance to feel content and peaceful, but more often than naught we ignore or fail to recognize these infinite reasons.

Finding a long lost letter, the description on the plain side of a photograph that reminds of a holiday well spent, sound of familiar footsteps approaching your doorway, your first pay, a phone call recollecting old times and making new plans. We always have something to look forward to.

With the right spouse you can make a million such memories every single day, and you are pushing a career and a wonderful girl away from you, and for what? To enjoy peace and calmness, the tranquility of this lazy town, to enjoy tea with an 86 year old?

If you don’t want to go back to Mumbai then give Arpita a surprise. Book her an air ticket and get her here. Show her why it is so hard for you to leave this place.”

Vivek listened without interrupting Arvind, he began to think that how correct Arvind was, and how every seasoned human being has the perfect commodity up his sleeve: experience!  A commodity which would be worth gold bars if it could be put to sale.

Losing Arpita in exchange for a few more days of peace and quiet was a thought too dreadful to contemplate. His wounded pride was a price too small to pay for the love she had showered him with.

Vivek promised Arvind that he will sort things out with Arpita in the coming few days.

Arvind got off his bed for the second time in two hours, looked out the window.

“I think the rain has ended for the week.” Said Arvind

“It’s temporary, it’ll rain in a day or two again.”

“We’ll see, and don’t wait up for me at the stone slab today either, I feel like resting.”

“Missing two days straight? You don’t have that much will power, I’ll see you in the evening.”

Arvind and Vivek as if sharing a private joke began to smile, while leaving Vivek looked down on the untouched glasses and said “Easiest bet I’ve ever made, see you in the evening.”

It was hard for him to balance the cups even though the grass was slippery no more. As Vivek made his way to the rendezvous point he pilled some tea on the cup and on his hand, he quickly rested both the cups on the slab and sat down on the right.

His phone beeped, it was a message by Arpita ‘Can’t believe I’ll get to see you in less than two days from now!’

Vivek smiled, clinked the cups and had his tea.

He was going to miss the hamlet.

A sense of quiet that was so precious to him had suddenly started to haunt him, the silence was digging into him like a sharp dagger.

He welcomed the noise of the cricket as he felt a sudden sting in his eyes, he poured some tea in the plants from both the cups and clinked them once more before pouring out the last drop too.

He got up and started moving back towards the tea shop.

His friend hadn’t made it for tea on the evening of the day they had met last and it hadn’t rained since either.

Arvind had not only won the bets, he had made a new streak.

Vivek missed his friend as he knew he would miss the place, but now that the prime reason of him staying back wasn’t there any more he knew it was time to leave.

As he looked back at the slab he could see the cup rings, he let out a sigh as he battled hard to keep the mist of tears away.

He walked away swiftly as the sound of the crickets began to fade in the background.