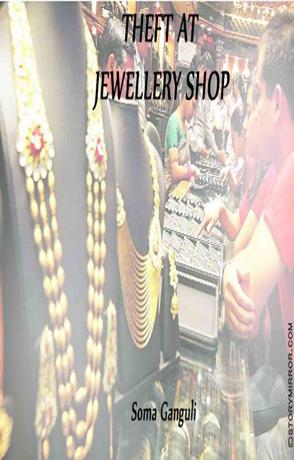 It was a cool windy evening; the market place was bustling with people who were busy shopping for their needs. Many peeped through the glass window of the big showroom of Mr. Dhanpat Dharma, but very few came in as it was a diamond jeweler’s show room. Mr. Dharma could tell by the very looks of the window shopper that how much she appreciated the jewellery piece but wouldn’t invest money in it. He enjoyed watching people and reading their thoughts.

“Hello Mr. Dharma, my wife Maya and daughter Rajni forced me to come with them. Rajni has come from Mumbai. She wanted to buy a few diamond. Show us some good pieces please.”

“Oh! Mr. Lal have I ever given you a fake or ordinary gem, tell me? You have been my regular customer for years. Can I cheat on you or show you cheap things,” replied Mr. Dharma.

“This diamond is from South Africa “said Mr. Dharma, showing an oval shaped diamond,” see its clarity and cut madam. It’s a rare piece which we show only to a few of our honored customers.” Mr. Lal, Mrs. Lal and Rajni took great interest in the piece and enquired about its price and other details. But Rajni was looking for something different and so she kept on seeing all the different pieces of gems. Mr. Dharma’s manager brought many more boxes containing varied quality of gems. The Lal Family liked the jewels but was confused. After debating on which one to buy for quite some time, they decided to come the next day as it was getting late.

As they were about to take leave the manager said that one of the gem was missing. The gem was the costliest among all that were shown. Mr. Dharma was shocked and thought how a gem could get lost in seconds from in front of his and his workers eyes. He asked his manager to see properly again thinking it might have got misplaced in some other box. The manager did as told but after sometime return regretting that the gem was nowhere to be found.

Mr. Lal was also astonished to hear such a thing. He was a little angry and feeling insulted as the gems were shown to him and his family.

“Mr. Dharma please ask your manager to pull the shutters so that no one can go out. The theft has been done by someone who is present here.”   Mr. Lal suggested as a precautionary measure.

Mr. Dharma did exactly as told. Now Mr. Lal suggested summoning the police to search all the people present there. He then diverted his attention towards the closed circuit cameras present in the showroom.

“Then I don’t think there will be any problem in catching the thief. It must have recorded all the activities going on in this room.”

The police arrived in fifteen minutes and started the investigation. The female constable searched all the females present in the shop while the male constable searched the males. But to no avail. The piece of gem had vanished totally. No one was found guilty of the crime. The police inspector asked a few questions to all the people present there and told Mr. Dharma that since no one was in possession of the gem they can’t be detained for long.

Mr. Lal at this point suggested that the police should also have a look at the C. C. camera recording before letting everyone go.

“Yes of course” assured the inspector and went straight to see the recording.

The police inspector saw the C.C. camera recording three or four times but did not get any clue as to what happened to the gem. So as a result Mr. Dharma had to let everyone go as it was getting very late.

Mr. Dharma got very disheartened and took it to his fate. He couldn’t understand how a gem could vanish from the shop. This incident had given him a shock. He was lost in his thoughts when the police inspector came and apologized for his failure in finding the gem for him. He also enquired about all the workers of the showroom, their timing, their address and other things. He advised Mr. Dharma to install a few more closed circuit cameras in the store as a special security measure.

Two policemen were kept on guard, outside the door the whole night along with the security workers of the store. The inspector told Mr. Dharma that a few of his men would be in the store the next day also in plain clothes. The customers should be dealt in the same way as they do on other days. No one should get the slightest hint of the missing jewel.

Like any other day, next day also the maid servant arrived at 8:00 A.M. for cleaning the show room. The police inspector, his men even Mr. Dharma was present there at that moment. She was startled by the presence of so many people in the showroom so early. As she was not aware of the theft in the store she thought that there must have been a raid by the income tax department. So she quietly went to the security guard and enquired. But since the guard had been directed not to split the beans by the inspector, he told the maid that she was already late for work and should finish her work as fast as possible to evade scolding from Mr. Dharma. Believing the guard she got alarmed and started off with her work to avoid any harsh words from the boss.

She kept working and the police and cameras kept a watch on her activities. She dusted the show cases chairs, sofa and moped the counter tops. As she was proceeding with her work, her mop kept sticking to something at one place. She tried to wipe it off but it wouldn’t go. This activity at once caught the eyes of the inspector. He asked Mr. Dharma to ask her about it.

The maid told Mr. Dharma that there was something sticky in the crevice at the base of the counter table. The inspector immediately rushed to the counter and found a chewing gum spit which had been deliberately pushed into the crevice. He told the maid to continue with her work, which she did whole heartedly and then went away.

In the mean time the inspector inspected the chewing gum spit and found the gem concealed in it. He showed the gem to Mr. Dharma who got over joeys and started thanking the inspector many a times .But the inspector wanted to catch this intelligent thief. So with Mr. Dharma’s permission he again hid the gem in the same way as it had been by the thief. He set the C.C. cameras in such a way that the focus was on the counter table with the crevice in which the gem was concealed. He asked his men in plain clothes to be very attentive as it was almost time for the workers to report for duty.

By 10:30 A.M. the workers had already reported and were active with their work. By the time it was 11:00 A.M. one or two customers also visited the store. The inspector was extra attentive to each and every move in the show room. At about 12:30 P.M. Mrs. Lal arrived along with her daughter. She was greeted warmly by Mr. Dharma. She asked him if he had found the gem, but Mr. Dharma made a sad face and replied in negative as the inspector had asked him to. On enquiring about Mr. Lal, Mrs. Lal said that he wasn’t well.

Though the day was like any other usual day but the eyes of the inspector was fixed on the counter in which the gem had been concealed. Mrs. Lal and her daughter were seated near that counter. They wanted to see some pearl strings. All of a sudden the inspector got alarmed and sprang out of his chair when he saw the hands of Rajni moving towards the crevice where the gem was concealed, she dug out the chewing gum and was about to put it in her bag when the inspector at the lash of an eyelid, ran and caught the lady’s hand and asked, “what is this Madam? You are a thief?”

Mrs. Lal and her daughter got very annoyed at this and started arguing.”What rubbish are you talking young man? Mr. Dharma what kind of people have you appointed in your shop? My daughter has come from Mumbai to your shop as you are reputed for your exquisite designs, but see your workers, so ill mannered. Do you know her father-in- law is a judge in high court and her husband is an income tax officer and these people are calling her thief?”  Mrs. Lal accused Mr. Dharma of abusing and insulting an old customer. At this point the inspector told Mrs. Lal in a firm voice that her daughters act has been captured in the camera and she can have a look at it herself as the recording would be produced in the court as witness. Hearing this Rajni broke into tears and started pleading for forgiveness. Mrs. Lal was shocked at this new outcome and fell in a chair nearby not knowing what to say or why all this happened.

Rajni was in tears, she hadn’t expected such a thing. She was quiet confident of her plan. But since her plan failed she could do nothing other than repent. Though she was not hand cuffed, she was insulted and humiliated by the stares and words of the others present there.

As for Mrs. Lal she was so ashamed of her daughter’s deed that she started hauling and crying. At times she was shouting at her daughter and at others she was hitting her, but was unable to decide what she should do. She kept on saying that this act of hers would bring disgrace to her family’s reputation. She will not be able to show her face to her family and friends.