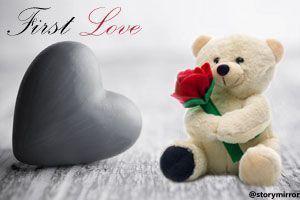 She never thought that she would find it easy to live without him. Though it took her so many years to understand that.

Now he wasn’t the first thing she had on her mind when she woke up, nor were his eyes the one she wanted to lose herself in.

After some time, love knocked the door of her heart again, and she let it walk in, although with an irrevocable fear of being left again which was bound to be etched in her heart because she was left by the one who meant the world to her.

Same words, but, this time, it didn’t bring color to her cheeks.

Sudden hugs, but, this time, her heart didn’t beat faster.

Stolen kisses, but, this time, her heart was somewhere else.

Maybe with her first love.

It was then she realised what she had for her first love; she can never have that for anyone, until someone comes in her life and bury it deep, deep within her wounded soul.