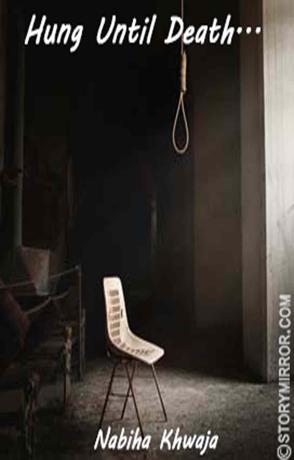 As I entered her cabin, a chill ran down my spine. My face went pale and eyes remained wide open as they rested upon Christie’s body lying on the floor in a pool of blood with a 9MM(pistol) beside. I froze in horror and it seemed as a nightmare. I wasn’t able to believe that she had killed herself, it wasn’t expected, after all there was no such reason for her to commit suicide. As I far as I knew her she was a lively, lovable and caring person.

Tears rolled down my cheeks as the moments spent in her company flashed in front of my blurry eyes. I felt on my knees and crept towards her, I felt like my heart drained all the blood. Holding her hands then, I wept bitterly. It was inadmissible for me to believe that Christie is no more. The usual warmth of her hands had turned cold, her pretty eyes were shut which could never open again voluntarily and her lips which always used to wear a smile, turned blue. I had always admired these pleasant beauties which she bore. They would chase away the worries and monotony of my life.

“Christie!”, someone shrieked in a familiar voice that revived me from my sub-consciousness and alarmed me. I turned back instantly to find her mother who just entered there. A few seconds later, I heard several footsteps approaching towards the cabin and the next moment I was surrounded by many wide opened eyes filled with anger and suspicion, looking at me. Then her father came forward and without a moment's hesitation, slapped me and asked me the reason for killing his only daughter.

I stood there, bewildered. ‘How could they suspect me for killing her in spite of being aware of the love and care we had for each other’? I thought. The cops arrived shortly to arrest me and I was put behind bars being charged for the crime I had not committed. This added on to my misery, was not Christie’s death enough to shatter me?

It was the morning of 6th June, when I was walking all the way to Christie’s office and suddenly caught a glance of her favourite orchids at a florist’s shop. I quickly purchased a bunch of them for I know they are sure to bring a smile on her lips and were something I was in dire need of because was angry and hostile towards me since last three days and I failed to figure out the reason for her strange attitude towards me. She had not been returning home also and after her office hours she used to go to her parent’s place and had been staying there since past few days. Moreover she was not even receiving my phone call. I was  pretty happy that day, I planned to talk to her frankly and ask for forgiveness if I hurt her unknowingly. I was pretty confident that I will persuade her to return to our home and make her shirk her anger and hostility towards me. But my aspirations got shattered when I saw her dead.

The police constable woke me up by throwing a bucket full of water over me. They were harsh, rude and found some or the other way to humiliate me daily. They ordered me to change as I was being taken to the court that day. The case was very easy for the lawyer who stood on the other side. All the proofs were against me such as my presence at the time the incident took place and Christie’s hostile behavior towards me for the past few days. The case ended up quickly sentencing me to lifetime imprisonment.

The following day, a constable came in and handed me a diary, it was Christie’s. He asked me to go through it….

“We fell in love at first sight when met at the St. Anthony’s College and got married very soon after graduating. We began a very jovial life together and were dedicated to each other, taking oaths of love and spend most blissful was the time spent in each other’s arms. But as the legend says that joy accompanies grief, similarly the grey cloud of darkness casted above us.  It so happened that he lost his job and grew aggressive day by day. Although , I still had a job with a handsome package(salary) but he refused to rely on my funds. I was against his pride and ego. However, a few days later things started getting back to normal as he got a job as a freelance writer in an online organization. I was thankful that we were leading a normal life once again but destiny couldn’t accept our happy life was what the situation depicted. A few weeks later, my friend, Sara handed me an envelope of photographs. The pictures was of him with other women and it portrayed that he was  engaged in a close, intimate relationship with them and it was clear that he had been cheating on me. He broke my trust and shattered me. How could he? Was the question I kept asking myself.  This relationship used to be my pride, my friends used to be jealous of the bonding between him and me. But the one whom I trusted the most betrayed me. I feel surrounded by traitors and cheaters. My life has no meaning left it seems. I cannot forgive him, I can neither live without him too, so the only resort left for me is to quit.”

These words left me in despair, the case seemed crystal clear now. She thought I had been cheating. Well, it is not her fault. The pictures must have led anyone to believe that I had been disloyal in marriage. I, although, did not had any malafide intention. I got a job in an advertisement agency for modeling. I hid it from Christie as she would have objected to this and pressurized me to take a job as a freelance writer or an attendant in a shop. But that offers pretty low salary and I didn’t want to rely on her funds. The advertisement agency offered to pay me handsomely well so I couldn’t refuse it. The bond of our love was very strong, we stood by each other’s side no matter how drastic the situation was. We couldn’t think of a life without each other. And now I regret that only if I would have acquainted her with the truth or would have opted for a job she advised me for, I would have then prevented such a mishap.

“Sir! You have been freed from the charge and you will be released tomorrow morning. Goodnight,” said the police constable who had brought Christie’s diary. My life had shattered, my world broke into pieces and I stood helpless and regretful. How could I live without her when I cannot even imagine staying apart from her.  Ever since she’s no more, every moment spent without her was alike that spent in exile. The next moment I had an insight which lead me to pull two shirts from my bag, tied their sleeves together firmly, hung it on the fan attached to the ceiling and then made a loop of it and tied I around my neck. Once I pushed off the stool that helped climb upto the rope, I could feel severe pain that I undergoing at that moment, but it was meagre as compared to the pain that my heart was suffering as a consequence of Christie’s death. Flashbacks of moments spend in her company played in my mind as my eyelids shut slowly as I hung…… and hung until death.