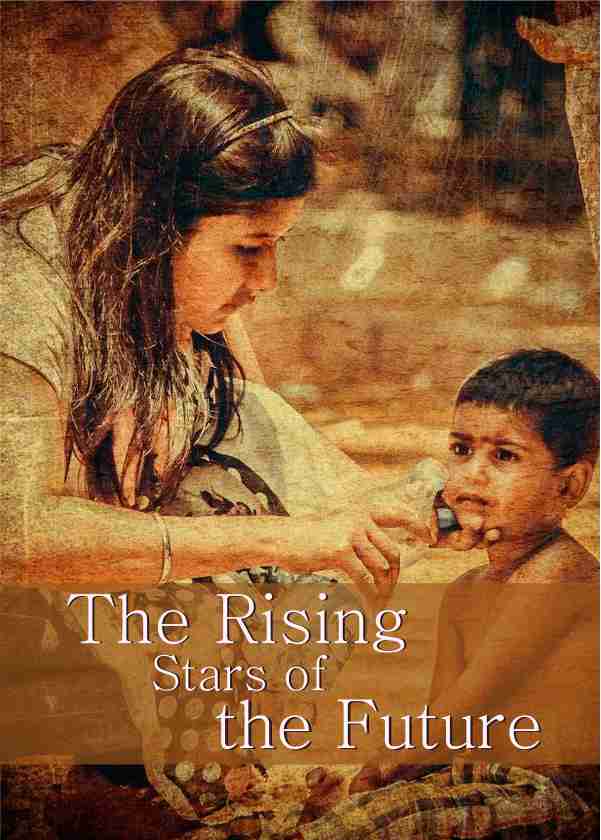 The Rising Stars of the Future

The Rising Stars of the Future

2017! A great start to my academic year. The scheduled tests of the first 3 months of my Grade 9 class had great results. My parents and I were really jovial. My life was going great. In the month of September, we had to pay a lot of attention while studying, as it was the last month to revise and the next month we had our semester examinations.

In mid- September, we were told that the ones who are extremely interested to come to Shahapur, Maharashtra for a social cause which was organised by the NGO called ‘Anmol Foundation’ can enroll themselves for the trip. No further information was given except for the timings, the dates and the theme. And the theme was 'Joy of giving'. I was extremely excited. I had an eager and thirsty ear. A few days passed, zealous and exhilarating. And it was the day! Early in the morning, a sea of small coloured exotic birds flew across the sky which was relentless, changeless blue. The melody of the birds and bees was mesmerizing. The sun laid golden soft over the huddled hills far away from the city. The smell of the other residents making coffee was my favorite of all in the early mornings.

I reached school, everyone was in the maroon school t-shirt and a blue jeans as per instructed. We waited for our bus which arrived exactly after 10 minutes. It was a breezy, tranquil and a really joyous two hour journey. Our eyes were shocked as we reached the small town. We were approximately 15 of us excluding the teachers; all of us blabbered about how stinky that place was. We were all complaining about the place being tacky. But then we saw how the people stayed in the town, dirt and mud all over the place and extremely narrow streets. I felt guilty to extreme ends. It is easy to throw up words about people, but can you imagine how bad they would feel? They would have huge dreams of living in homes like we middle- class and rich people do. We then arrived at the place we were supposed to go. It was a humongous ground with zillions of little children from different schools and what is sad is that they were all impoverished. Every little kid sat down on the ground covered in a bed sheet of dirt and all wrappers people throw. The air was raw and pointed. But every child was as happy as ever! Their whole face was lighted with a fierce enthusiasm. My face was drenched in sorrow, seeing all the tiny tots eating on the ground covered in filth, on a piece of newspaper. I felt so sorry for them for some reason. We were then taken to an area on the ground itself which was covered with a gigantic cloth on the top as a roof; supported by tall cinnamon coloured bamboos. The youth was settled in scorching and sweltering heat. There were about 15-20 tables kept with different stationary on each table. There were school bags, water bottles, notebooks, lunch boxes, pencil cases with pencils, erasers and a ruler inside them and geometry boxes for elder children… We were told to stand near any table we would like to, and then distribute the stationary kept on that table to all the 10,000 children or even more who would come in queue to collect those articles. I was like whoa!! 10,000 was a HUGE number! Now I was even more excited. I just wanted to start off. We were told to keep bags in a class room which was empty because it was a public holiday.

We now had started off. Every little one had a smile on their face. I had to insert a water bottle in the side pocket of the bag and then close the bag chain for them. So that the NGO can click a picture of the group. Each table had two of our school children controlling the table and a person from the NGO crew, who would keep on emptying cartons of stationary once empty. It was seriously a ton of fun but also quiet tiring and sweating, but that didn’t matter. We were not allowed to take a single break because the children would come non-stop in really long queues. I felt so good when little ones would shake hands and say “Thank You!” to me. The smile and excitement of their faces gave a completely different feeling. My heart melted. I actually have no words to describe that emotion. I then thought we are so careless! Our parents provide us with everything we want, but we are so immature to not even care and say a small thank you to them. Saying a thank you would not take hours of our life, but rather that magical word will bring a smile onto their faces, and you would feel proud of yourself. Making our parents happy is a great goal in all of our lives. We all want our parents to smile, feel proud because of US.

I was just so much inspired by the cute little smile on those children’s faces. And yeah! No one would’ve heard of a little smile being inspiring, but, why not! When a smile could make us do something amazing for our parents then why not! After all inspiring means fill someone with the urge to do something creative. It can even create a positive feeling in a person. And that has happened to me. I have felt so much good after distributing things to children you can’t even imagine. The joy and smile on their faces is something extremely mesmerizing. Those kids live with some kind of financial issues, but then to they are happy. They also would have so many dreams and wishes and couldn’t fulfill it but they are still so so so blissful!! Here when we don’t get anything we desire, we let out gallons of tears and crave for it anyhow, then due to our blubbering we get what we wanted. But they are so patient and wait until the right times. They don’t ask for stuff they want, because they understand. We should honestly learn from them.

I admire those kids! I’m so thankful That I got to visit Shahapur for “Joy of Giving”. It was really a lot of joy, giving stationary to those 10,000 or even more impoverished kids was dazzling!! Those few hours were epic for me and my friends!!!