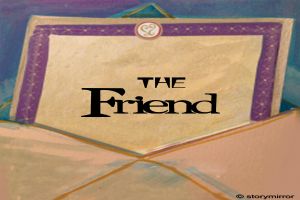 The AK-47 bullet just flew past my shoulder. The heat of Afghanistan and the dust, shouting, bullets and cannons screaming were the worst I ever had in my whole Army career. A new organization “Al-Mazabk” just threatened to wipe out the whole British regiment stationed at Afghanistan. We were ordered by the commander to do the vice versa-wipe them out. 6 Hours had gone by and the battle was slowly coming to a standstill. The dust storm was doing it’s thing. Suddenly I was accompanied by my friend. Probably the only person I could ever trust.

It was 27 years earlier when we met-in a hospital, as infants. Probably the doctor had accidently switched us and handed to our parents but that switch turned out to be the best ever friendship we ever had. We were soon neighbors when we were 10. Our house was located just outside Manchester, a small suburb of Martishire. The best thing was it was not technically a suburb as it was just outside the Blooming city of Manchester and we could see the towering Old Trafford stadium every day through our windows. Both our families were Manchester United fans so even with the low salary our parents used to get, a match at Old Trafford was a must. Though being in the city of Mighty Manchester United, we were not interested in playing that much amount of football. Having good grades, me and my friend were often bullied. The end of high school was near and we both decided to do engineering.

But things weren’t the way we thought would be. Our families had very less income and although we were easily eligible in the University of Manchester engineering courses, fees demand just did not meet. Those days were tough for him and me. We went to Old Trafford. “The Theatre Of Dreams” as Sir Bobbly Charlton had termed the magnificent stadium. We had dresses of officials so we dressed and went inside-illegally, of course. No match was going be played this week. The stadium was empty. We sat on seats in the “Sir Alex Ferguson Stand.”

He was quiet. He had water in his eyes. Though being more strong between us, he was weeping. Finally, he replied. “You never know my friend, where life takes you. Sometimes you just have to go with the flow and accept the situation.”

“But what about your dream of becoming the CEO of Microsoft?” I asked.

“What about it, buddy? Do you really think we are in a situation to even study in an engineering college?”

No. We weren’t. He was right, as always.

Suddenly after some time he spoke. “Army.”

“But we were bullied in the school, we are weak, how can we even think about the army?”

“Well, Einstein was called an idiot in school but we all know who he is, right? I’m not saying we’re Einsteins, but I think it’s worth a try. Tell me, what other options de we have anyway? Our family earns just enough to keep our stomachs full and rest money is spent on watching Manchester United Play. Don’t you think we should be serving our country rather than doing nothing at all?” He said.

And he was right, as always. We decided to join the Army and our Family accepted our decision.

We were  trained as amateur personnel in the army camp at West Devonshire. We had to go through hard diets, little or no entertainment. Torture, offense, defense, We even learned how to use a tank and finally we were as fit as hell. No one ever thought that we were the kids who were bullied. We both friends were now mature, from the inside and outside. And we did pretty well and raised ourselves to higher ranks. We were stationed at North Korea and I had a deep shoulder bruise due to a bullet. Not that fatal, but my friend got so angry that he stole the enemy’s tank and opened fire on them fully. Battle won, we both were out for a year. Me, with a bruised shoulder, he, for breaching orders of the officer.

After a year, we both thought that we’ll get demoted to our older ranks but instead, we got called on the big stage: Afghanistan.

We both were ready to rock and roll and here we were, in the middle of the battle, ready to kill, ready to serve our country.

“Yeah. But I like this life more. Somehow it’s started to flow in my blood, you know, to destroy the enemy.”

“Yes. But I only have one regret, my friend,” He said.

“We both friends never had a chance to have girlfriends,” He said.

And we laughed wholeheartedly until a voice distracted us, “Fire in the hole!” Shouted the commander.

No sooner did we get up, a bullet from an enemy machine gun hit my friend’s forehead. He fell down and I caught him. Even before he said anything, he went away. Far away.

My friend was dead.

My only best friend was no more with me.

I couldn’t feel anything. It was all black. Then suddenly there was fire. There was a fire burning inside me, water flowing out of my eyes. “I’ll be back, my friend,” I said to him, or to his body. I took two Assault rifles in two hands and pulling the trigger, I ran.

I began to run and run and my feet and hands were never stopping.

“You killed my friend, fuckers. No one will save you now, no one.”

I didn’t know how much I ran or shot, my heart was still engrossed with my friend, maybe at school, maybe at West Devonshire, maybe at the empty Old Trafford stadium.