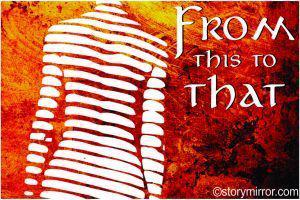 "I love you but I am not in love with you... I wish we were in love together."

It was again that fateful night. Rather afternoon. He wanted to visit the modern art gallery. They strolled through the gallery looking at Shergill's nudes. She was not very impressed. They all looked too familiar. He, on the other hand, was rather politically correct- in front of her, "the images are rather imperfect... Good! Women imperfect but men seemed perfect." She nodded. Smiling away, she knew she was excited.

To be there with him, spending quality time with him was what fulfilled her more than any image on the gallery. Though they were fascinating. He started playing with her, there itself in the gallery, gently rubbing her neck and bringing her close to him. She blushed. All red. Flushed. People were watching. There was a sudden peace to belong with him, being accepted by him, loved by him. But she was rather shy and asked him to move away, to stop brushing by her nape, rubbing her neck. ... It was that unfortunate day she was raped by the man she loved. .... One year had passed by.

That was the last time she saw her. She struggled now- all black and scarred inside. But she still appeared to be that light that entered his silent cracks. She perhaps had no darkness before him, but it was her darkness that invited him. She thought she could never fall in love again. Maybe she deserves no man now, she thought. Hurt and bruised, with an injured self... Why must anyone else carry the burden with her? All these were traces from her diary, which she saw several years later.

It had been twenty years now. She thought it was time to reveal herself to her daughter- Jijeewisha, who was her only living hope. But how could a mother reveal to her child the grim realities of her fate, to acquaint her with the world was dangerous. She was afraid that doing so she would inhibit her, scare her and perhaps even embitter her towards the world. Maybe it wasn't time. Maybe there was a need for a footnote, so along with her diary, she handed to jijeewisha, this letter:

"Hello my baby, Mumma loves you and you love momma. Mumma is afraid after she tells you what she does, you aren't perhaps going to feel the same way about her. Perhaps you won't love her as you do. But that's not the greatest risk. The greater risk is to acquaint you with the monsters of the world, to tell you that no matter how scarred the world might look, how broken or hurt you maybe, life lives on and we must never lose the desire to live- that's you my darling, my Jijeewisha, my will to live. When you open these traces from my diary- you might be shocked, angered, tearful, hurt, agitated. You won't believe that something like this could happen to your mom! You wouldn't know how to react to it. The world will scare you, my love. Embrace it anyway. There is darkness. There are monsters, but there are angels too. The letter is here to protect you, my dear, but I also know I can't. Your life is your own struggle. No matter how much I try and wish it I cannot assure that your heart won't be broken. There was someone with whom when mumma shared her deepest secrets of her childhood told her that parents shouldn't reveal everything to their children. That this is also protection. But I will still reveal everything to you- all of it. Because I know that this will surely scar you but empower you, the scars that are always empowering. Jijeewisha, I won't pressurize you, my love, though you are my will to live, to continue living. But I will tell you what has kept your mother alive till date. It has been faith. Faith in the goodness of people however hard it has really been. And if you keep faith, you really do find people who are great. Who are true and honest and real. Embrace their darkness. Love them. Live them. However broken you may be, don't stop that faith from igniting your heart. Mommy isn't the example for your life. Don't judge by my standards. I know you are wise enough not to. But this is just one story, my love. One little story of the person you love. Happy 18th birthday, my dear. Mumma is foolish and weird, but mumma is yours. Remember that always.

From This To That.