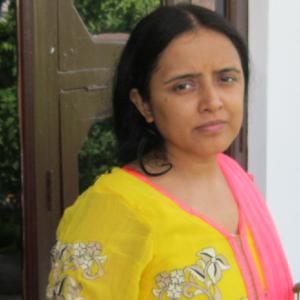 The shade of Peepal falls across a railing. Reclining on it has been an impossibility, perhaps no one ever tried it too.

Someone only to make an oeuvre of alloy for other purpose, stranded into a shape that fits of a possibility of a sculpture. Divided into lanes, the buses pass on their lane during the day rather stopping for passengers. Besides peak hours, the distance between the stops is reduced due to local transport by autos. Preferably, I too pack up my motley of articles and start early in day. When it is not possible, like a lonesome face of unknown location a bus stop becomes a destination.

I muster the courage to buy juice from a nearby cart. Its belongings often leave me with a desire that I replace by visiting local mandi. Sipping and stranded are two options for me.

As if the dawn is just breaking, usual for city because of buildings and offices, the energy infuses into our bodies. A corner, a little further of a bus sign, is broomed by a fragile but reasonably clad person in mid-forties. A wooden box, locked, is placed closer. He has acquaintances. A person passing by on his bicycle waves a morning greeting to him. The water is tripping from a hand pump near the general store. I never observed earlier, marked by much vegetation. A fine mat, knotted of plastic sheets, is spread at the place and he takes out his tools and places them at positions.

Generally, one can guess him to be a cobbler or a pavement vendor. It is yet unclear to me. He lights a dhoop (incense stick) and within his tool box (there must be an idol or a photo), he offers his prayers.

The crowd starts to gather at bus stop. There is hustle of autos that are keen to take as many as passengers. Often the buses at this time have issues, scaring them to stop at a distance by honking horns or slow movement towards the vehicle. Over years, I too have learned that getting on buses is an art to perfect. You can display fear of being struck or dropped while ascending in rush. One can make noise or imperfect a query to a popular destination.

No matter everyone gets on since this is the closest on the route but if you wait for a couple minutes as they arrive for different schedule, it is worth a gala ticket. A bus arrives for a university route and halts in punctuations at bus stop where the passengers will certainly decide like a countdown to be on it. The gearing engine often too adds up as the background music for a seeming take on.

Early morning is an asset, even for a single person when one would have to chase few steps ahead of a bus sign to claim the feat. The rush is too of parents and men who would ferry off their wards. Within ten meters, it makes a whole world devoid of funfair of nearby general and essential stores, a travel agency with parked assorted cars, and fruit and juice carts.

My route bus has not arrived yet. Beyond I watch the person with that ground patch meditatively sitting. There is one bicycle parked on other hand besides the pavement. He perhaps, is a bicycle repairer. No rush, the beams profusely on a tree bend to touch the ground, almost conspicuously.

Later during the day, in a talk with my friends, we came up with a suitable plan of visiting Delhi for sightseeing. I assured them to inquire from the same travel agency near the waiting stop. The leaves thicker towards the sides but spread over a street flew with slightest of breeze. The cycle repairer was sipping his cup of tea in evening. His place was still inhibited by appreciable vehicles or customers.

We moved on to decide the vehicle at travel agency after an inquiry. The day was deep setting.