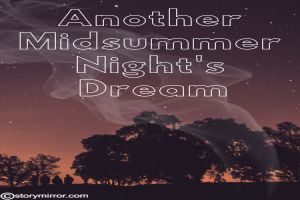 I stood in the emerald glen overlooking the tranquil panorama of Summersvale, waiting for my handsome hero to approach. The fragrant scent of lilacs and roses was in the air.

“Oh,” I mused, my heart skipping a beat or two as I heard a familiar grinding of wheels on the sand grained earth of the vale.

“Looks as though my lord Jaques has gained knowledge of how not to be tardy!”

Jaques St. Clair, the lord of Summersvale stepped down from his regal chariot looking as majestic as the day I first saw him. I often dreamed of him, coming to rescue me battling dragon and demon as he did.

“Oh, a young mind’s whims,” guffawed old mother Phoebe whilst I had shared with her these fantasies.  How could she be au fait with the apprehensions… nay, the excitement of heart in love?

He advanced toward me with an equanimity shown by none, save himself. He acknowledged my presence with a polite yet distant smile I had so oft seen. He concealed it amicably but his worried visage bespake of a dire problem that I with my ample knowledge of my betrothed could easily see.

“Oh, my lord,” spoke I, “Your furrowed brow betrays some dark burden. I beg you to share it with me.”

He turned his gaze upon me for a long second and said, “My problem milady Lucinda, is that I am not worthy of your love.”

“Oh, but you are... You are. There would be no other man in the whole kingdom that I would rather have!”

“The love you hold for me blinds you from the truth milady. I have been handed the responsibility of readying a dress for her majesty’s birthday. But there is no seamstress in Summersvale talented enough to please the queen. She would have me begging in the streets, stripped of all titles and honours.”

“Is that all my lord?” laughed I, merrily at his expense. He looked utterly bemused at my outburst of mirth.

“My lord, I implore you not to worry. I have spent many a day apprenticed as a little girl to my grand-aunt Rowena Barthorean of Loch Lomond, considered second only to the goddess Minerva in the art of weaving. I shall help you get her majesty’s dress ready in no time. So pray laugh and be merry.”

“You, my dearest,” said he his eyes transfixed on mine, “have saved my name. Come my Aphrodite, let us steal away on my fiery steed unharnessed from the ropes that bind it just as I am free from the qualms that had me troubled.”

We rode away on the pearly stallion’s back to the haunting refrains of the bagpipes being played at a distance.

Later, cocooned inside the high walls of the castle I sat on the banquet table shining brightly with the silverware arranged so beautifully while the lord himself served me like the young swain he was. Cornish game hen, prime ribs of beef, lamb with Yorkshire pudding, Strawberry tarts… Sigh!

“Oh Jaques, I long to stay with you forever and a day…,” yawned I as I rested my head against his broad shoulders and nestled up to him cozily. I had never once thought that this would happen betwixt us.

I woke up only to find my friend Phoebe packing up her books. “The library is calling it a day. I’m going home and grabbing some shut-eye. I recommend you do the same! Honestly, you’ve been reading a lot of that Shakespeare stuff!”

“Kay Phoebes… ‘Night,” I waved lazily getting up from my chair.

I stood in the concrete jungle overlooking the never sleeping city of Summerfield waiting for a bus to take me home. The repulsive smell of smoke and sewage was in the air.

“Oh,” I said turning back when out of the blue I heard a familiar voice muttering curses. “When did Jack start speaking to himself?”

Jack‘s a great guy. I’ve known him since we were kids. I wish I could say he did well in school too, but he was almost always failing tests and was maybe, a semester away from being kicked out of school. I had a big crush on him, but it would take me ages to get the message through the dunderhead’s thick skull.

“Hey Lucy,” he said, his face speaking of three, maybe four sleepless nights behind him.

“Was hoping the library would be open. Tough luck, eh?”

“Oh Jack, your brooding countenance reveals you are beset with worry. Pray share it with me.”

“What…? Oh…,” he said, taking the time to translate the parseltongue.

“It’s just that the Math homework is too damn tough for me to solve. I keep flunking every test. I’ll be thrown out of the class if this keeps up.”

“Oh is that all? My poor Jackie,” I said stifling my giggles at this silly problem of his.

“Take me to your parchment and quills and allow me to lift this burden off your shoulders. Come; let us make haste on your sterling chariot.”

“Lucy you’re a lifesaver! But my ‘sterling chariot’ will have to wait. Docked over at Mike’s for repairs. Hop on to my handlebars; we’ll have to make do on my bike.”

“We could use some music to accompany us on our journey…”

I wasn’t sure why but the sound of a street musician’s bagpipes to the sound of his pedals creaking made me feel nostalgic… Like something from a dream!

“Hey what do you say we grab a bite to eat after we’re done?” asked Jack.

And so later I sat in what was probably the only McDee’s open that late at night and waited till Jack brought me a Big Mac and fries. Sigh!

“Jack, I want to stay like this forever,” I said as I put my head on his shoulders and snuggled up to him. My worst fears turned to ashes as he held my hand and said, “Me too Lucy, Me too!”

That’s when I realized that dreams do come true… Even if they are a little different than you want them to be!

This was one dream I wasn’t going to risk waking up from!