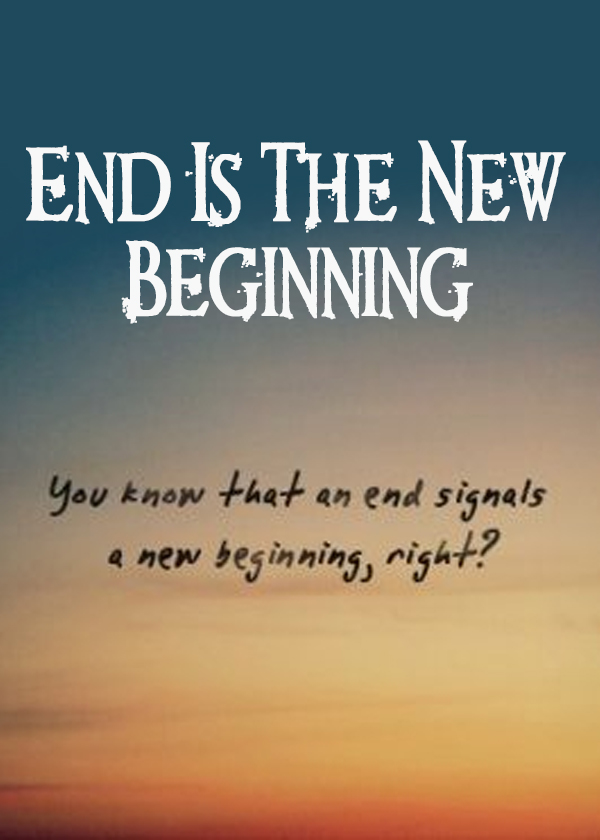 End Is The New Beginning!

End Is The New Beginning!

It was a regular day like any day in Rama's life. She got up early, did her routine household work and then she was getting ready for work.

But everyone was looking nervously at her, her husband, her son, maid …They wanted to say something to her but they couldn't. She called her husband-Madhav to take her for work. Her son Aryan was looking at them constantly observing his mother. He gave a worried look to Madhav, asking where they were going. Madhav assured him nothing was wrong, everything was under control and he would take care of the situation. Aryan wanted to stop them but he couldn't.

They left for Rama's work. He took her to the place where she was working since last 35 years. “Modern High School, Established since 1930." A big metallic board emphasizing on the historical identity of the British era school. Madhav was getting nervous as they were approaching the gate of the school. He stopped in front of the gate, Rama got down. Passing students greeted her with smiles. Meanwhile one of the janitor at the school appeared and called out Rama.

"Good morning Headmistress mam, what are you doing here? Don't you remember, you have retired?? We celebrated your farewell yesterday only. Go home, enjoy your retirement!" His tone was full of sarcasm.

Madhav felt very uncomfortable and sad for Rama. He was searching her face, he couldn’t understand her exact feeling. But Rama was as pleasant as she is!

Suddenly Akash from school staff appeared. He greeted Rama respectfully and scolding the janitor. "Go and do your job. And mind your own business!"

Madhav felt as relieved as one can. He was thankful to Akash, as he saved him from doing the awkward job of consoling Rama. He was expecting some words of consolation from Akash for Rama. Instead Akash came up with his motor-bike and asked Rama "Are you ready mam? Shall we start??" Madhav was confused and he asked Rama what was going on. But Rama asked him to follow Akash.

They were following Akash. They passed few societies and the road narrowed barely into a small lane. Madhav questioned Rama whether they were on the correct direction. But Akash was already leading the way, Rama assured him with a nod. Then they stopped .The place was nothing where Madhav would imagine Rama! It was full with small houses of tin. There were people standing in the long queue for water, arguing, cursing. Somewhere, there were stinking municipal toilets. Some people were looking like they were anemic, some were wearing torn clothes. All in all it was a shady looking area. Madhav was puzzled, what they were doing there.

Just in time a little girl called out Akash. “Dada, you are late again. We all are waiting for you from last 10 minutes."

"Sorry Asha, but I had an important job to do! But now let’s go" Akash smiled at Asha. She was a skinny girl, wearing old but clean clothes. Her smile was infectious! He took her hand and started moving towards an old house. They went to the terrace of the house where around 30-40 children were waiting, looking similar as Asha. There was a blackboard, a chair and that was all.

"Good morning all of you wonderful people there! Sorry for being late. Then again I had an important job to do! It took a while but I brought you the best teacher ever possible. She is not just good but the best. Because she is my own teacher, Rama Kale." The kids cheered with joy surrounding those three. Rama greeted them all. She smiled and patted Akash.

Madhav was astonished with the happenings. Rama approached him and whispered in his ear. “I hope you liked my new workplace, just a bit far compared to the old one. "

Madhav replied wink “Oh, I liked it very much. I am happy to be your driver as long as you are paying for the gas! ".