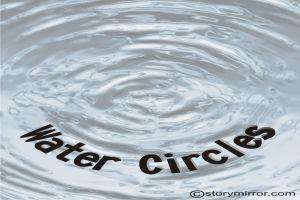 Some children were playing near a pool. They were playing with their football in the playground. A boy had a wound in his leg and so he was not able to play and was sitting near the pool. While sitting aloof he was getting bored. He took a little stone from the ground and threw it in the pool. He saw that throwing stone made water circles on the surface of water. He liked it so much that he threw a stone again. Other children saw him throwing stones in the pool and enjoying it. The said what are you doing sitting here alone.

The boy said I am enjoying myself and looking at the water circles made by little stones. The children liked it and they also started throwing stones in the water. Some children threw larger stones so that larger circles would be made. They saw that as they were throwing stones, the fish were moving in a confused manner to save themselves. At the same time a farmer happened to pass from there. He went to the children and said you are lovely looking children. You study in schools. Do you realize that you are hurting the innocent fish? Many fish would die with the strike of large stones.

The children realized their mistake and felt sorry. They said actually we liked to see the water circles, but we did not know that we were hurting the fish in the process. We are sorry. We won’t throw stones in the pool now. And the children started playing football again in the playground.