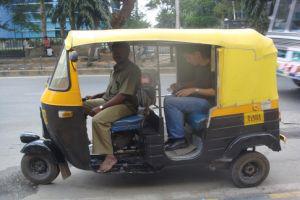 It was 7PM and Madhav was eagerly waiting for his next target.  There was this man standing with a backpack and constantly looking at his smartphone.

He was probably waiting for someone. He had already denied 4 autowallahs.
Madhav had already noticed this so he wasn't keen on asking the guy where he wanted to go.

Around 7:30, he got a call and he looked a bit tense. He started looking around for auto-rickshaws. Now Madhav made his move.

The guy looked like an outsider. Around Eight to Nine Hundred was there for the making. Although going by the meter it would have been around two hundred and fifty but then who goes by the meter rate these days anyway. Five Hundred is pretty easy and if the guy is an outsider and looks desperate then you generally hit a jackpot.

Madhav could clearly see a Jackpot on the cards. Madhav approached him and asked, "Where do you want to go saheb ?"

"That's too far. I can take you there but then I will have to return without a customer. It takes around five hundred by meter. I will take around A Thousand Rupees including the return."

"Okay, I am fine with it. You switch on the meter. I will give you double of whatever it is."

"My meter isn't working but it’s that much only saheb. Why will I lie to you?"

"Hmmm... Okay but then you will have to drop me inside the society. Will you?"

"Barobar saheb.  Actually for you I will give a discount of two hundred rupees!" Jackpot was in the pocket.

"No. I am from Delhi. But I work in Bangalore. My friend stays here."

"Okay. Then it’s good that you came with me. There are some autowallahs who charge people double of what it should be. I saw you and I wanted to give you a fair rate. "

"Greed sir. Greed. Once you get used to getting easy customers who have no idea what's the correct rate, it's very difficult to get back to the normal meter rate."

"So you never felt like cheating people?  Even a bit?"

"No Saheb.  I don't get a good night's sleep if I have cheated or lied to people to satisfy my own greed."

"Same here. It's very difficult to live with a fact that your money came by cheating someone. You or a good man... What's your name bhaiya?"

"Okay. Madhav bhaiya.  Once we reach Pimple Saudagar, just stop by any ATM near Shivar Chowk. I need to take out some cash and also buy some sweets. I hope there will be some sweetshops there. My friend tells me that's one area where most of his shopping happens. "

"Okay sir. There are two three ATMs there and couple of sweet shops. You shouldn't have any problem. The place has developed a lot now compared to what it was five to six years ago."

"Where do you have to go from here?"

"Towards Govind Garden. Do you know that place?"

"Yes, Saheb, It's straight and a right. We are almost there. This is a one-way, I will have to take a U-turn if I enter. You take out money and buy the sweets. I am waiting across the road."

20 minutes passed by.  There was no sign of the guy.  Madhav couldn't believe what had happened.