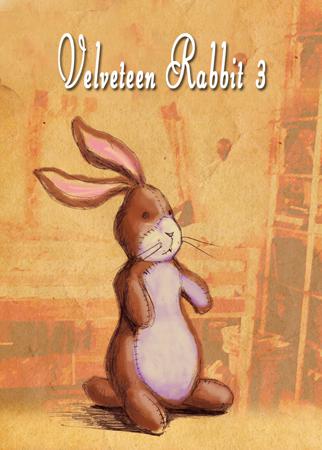 Spring came, and they had long days in the garden, for wherever the Boy went the Rabbit went too. He had rides in the wheelbarrow, and picnics on the grass, and lovely fairy huts built for him under the raspberry canes behind the flower border. And once, when the Boy was called away suddenly to go out to tea, the Rabbit was left out on the lawn until long after dusk, and Nana had to come and look for him with the candle because the Boy couldn’t go to sleep unless he was there. He was wet through with the dew and quite earthy from diving into the burrows the Boy had made for him in the flower bed, and Nana grumbled as she rubbed him off with a corner of her apron.

“You must have your old Bunny!” she said. “Fancy all that fuss for a toy!”

The Boy sat up in bed and stretched out his hands.

When the little Rabbit heard that he was happy, for he knew that what the Skin Horse had said was true at last. The nursery magic had happened to him, and he was a toy no longer. He was Real. The Boy himself had said it.

That night he was almost too happy to sleep, and so much love stirred in his little sawdust heart that it almost burst. And into his boot-button eyes, that had long ago lost their polish, there came a look of wisdom and beauty, so that even Nana noticed it next morning when she picked him up, and said, “I declare if that old Bunny hasn’t got quite a knowing expression!”