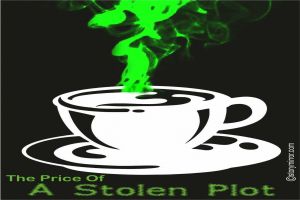 The Price Of A Stolen Plot

The Price Of A Stolen Plot

Oh! How I loved her! Her tinkling laughter, her jet black hair that fell in waves till her waist, and swept lightly against my chest as she slept, her dark eyebrows that stood in such contrast to her skin, her mind – oh, her deadly mind, camouflaged so completely by that cherubic face! What wouldn’t I do for her – my Kamala, my love, my life!

My mind was lost in a maze of thoughts and emptiness as I stared vacantly at the wooden armrest of the chair I was sitting on. A heady scent of fresh jasmine flowers and filter coffee wafted into the room.  Kamala entered with a tumbler of the bitter brew and the edition of the day’s Bangalore Times which featured my interview on the fourth page.  She smiled, a smile that held secrets that only I knew. Or did I? With Kamala, you knew and yet, you never knew. Those eyelashes were treacherous; they brushed a lot under the carpet in one sweep.

She left the room. I glanced at my interview. They had altered some of my statements, made it look a little more – shall I say “colorful”. Unrealistic, somehow, but written to seem like “an author’s words”. I chuckled briefly. What farce! As if authors were expected to speak like douchebags at all times.

What farce, that the interview was a part of the promotional activities for my new book.

What farce, that the story was not written by me at all.

And I lived in constant fear that I would be found out – exposed to be the fraud that I was! I knew now what the metaphorical sword that hung over your head was.

It was not that whatever I had written so far was unoriginal material stolen from other sources. No. I had written and published several original works. I had earned the reputation and title of the “masterful storyteller of India”. But this latest could very well be the one that destroyed all that I had built for myself. What would Kamala say if she knew?

Were Kamala finding out or being exposed my only fears? Or was it the real issue that gave me sleepless nights filled with cold sweats? The one that I hid under these inconsequential matters such as my new wife and the literary world finding out I was a fraud?

Yes, I had recently married Kamala. I had desired her for far too long, but the truth remained, Kamala was my friend Naresh’s wife. Naresh, who met with an unfortunate accident a year ago. An accident which led me to offer my sympathies to his young widow – my sympathies, my shoulder to cry on, and very soon, my house to live in, as my wife, to remove the title of “widow” from her young shadow. An accident, after which I worked on my latest literary masterpiece, which was receiving so many accolades.

An accident, which I wasn’t quite sure was one.

Naresh and I were at the bar that night. He was narrating to me a story – a crime thriller. A plot he had been playing with but just did not have the focus to type down. A plot he was foolishly narrating to his writer friend. He had had too much to drink already, but I egged him on. I drank a peg or two, knowing I had to drive back. When it was time to leave, I courteously offered my friend a ride back. I might be lucky enough to catch a glimpse of Kamala, I thought.

“But how?” I asked, mustering enough concern in my voice.

As I pulled my car out of the parking lot, I saw a staggering Naresh ahead on the side of the road, staring at his cellphone screen. It was late and apart from some drunken revelers, there was no one in sight. I hit the accelerator, and after making sure no one was looking, drove towards him and hit him. Hit him hard enough to make sure he fell on the road, but not hard enough that the blow would kill him. At least not immediately. Luck may have been on my side, for Naresh fell headfirst on to the pavement, and I heard a cracking sound. I rushed out of the car, but the revelers ignored us. I lifted my friend and put him in the backseat. I rushed to the hospital, where he was pronounced dead on arrival. The case was marked as an accident, and they said the victim was too drunk to be aware of his surroundings.

Reading the interview this morning, the guilt weighed heavily upon me. Perhaps, I should tell Kamala the truth. Because it is only truth that can set you free. My book will be banned. I will be jailed, surely. But I will still be free – free from all the fear of being found out one day. Wouldn’t it be better if I came clean on my own? Yes, that would definitely be better.

I was about to call out to Kamala, when suddenly, I was gripped by a coughing attack. It wouldn’t stop, and soon I could feel my shoulders and chest aching. The next thing I knew, I was spitting blood.

“Kam-!” I tried to call out between the coughs.

She heard and she came back to the room. She looked at me. There was a sinister smile on her face.

I was now bleeding through my nose; my palms and fingers were covered with the crimson liquid and saliva.

“You thought I would never know?” she asked. “Well, dear husband, let me tell you something. That story you wrote – you didn’t get the idea from Naresh. It was my idea that the fool narrated to you! And you thought I didn’t know you wanted me? I always did. But I never thought you would murder my Naresh for me and a paltry plot! Enjoy your coffee, dear.”

She picked up the newspaper, and sat cross-legged on the edge of the bed next to the chair I sat on, the smile not leaving her face.

The beautiful smile was the last thing I saw.