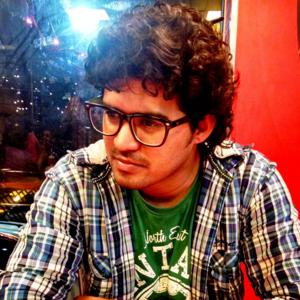 It was 10:00pm. Women in our culture are supposed to lock themselves up in their homes after dark! Or else some cultural & ethical man would take up the job of teaching them a lesson for this sin. One such man was the cab driver whom she hired to get back home. It was quite an eventful day. She had given a presentation to her country head, went to client’s end for a meeting & attended a department get-together in the evening. The after effects of the exertions of the entire day were showing now when she sat comfortably in the back seat of the cab. She didn't know when she fell asleep. When she opened her eyes, she found the cab was standing in a secluded area. The cab driver was opening the door to move out. It was dark outside, still she could see the two figures standing outside.

His mind was suddenly brought to the present by the honking of a car standing behind him. The signal had gone green 5 seconds ago, but his mind was lost in the thoughts of the poor girl. He waved his hand as a sign of apology to the car driver. He kicked start his bike, released the clutch and pulled the throttle. It was the scorching summer of June in Delhi. He was riding the bike at a speed of around 60km/hr, still he was not feeling the breeze rubbing his body. He felt as if he was in a vacuum. Though he tried hard to focus on the road, his thought again ran back to what had happened the previous night.

She stepped out of the car and asked firmly, “What happened? Why did you stop the vehicle here?” Though she knew there was something wrong here.

“Nothing happened yet, madam. But there is a lot going to happen now,” said a man cheekily.

“Shut up! Just take me home or else I will call the police,” she raised her voice.

“Why are you getting angry madam? The weather is already so hot and you are just raising the temperature of your brain,” said another man by tapping the neck of the girl by his fingers from behind. The girl turned and slapped the man standing behind.

“What the hell do you think you are doing!” shouted the girl. The man put his hand over the left part of his face where the girl had slapped him and said, “Look man! She is a wild cat. She will be a lot of fun.” The other two men standing behind the girl laughed at the remarks made by him.

“Indeed,” said one of the men and moved close to the girl from behind and pulled her hair. The girl cried in pain. But she didn’t give up. She moved her hands backward and held the fist of the man. She tried to open up his grasp. But it was too tight. She then further waved her hands backward to search for his face. The moment her hands touched his face, she scratched it. It was the area near his eyes. The man screamed in pain and released the girl. The second man got angry and slapped the girl hard. She fell to the ground. She realised she couldn’t outfight them. She got up and turned to run away, but the third man whom she had slapped before, blocked her way. He kicked her in the stomach. She screamed in pain and sat on the ground.

“Bitch! We wouldn’t have been so rude had you had surrendered,” said the man with clenched teeth. “But you are going to repent what you just tried to do,” said the second man, joining his friend.

“It’s all your fault, madam,” said the third man rubbing his right eye. “You shouldn’t have been out so late. You know, after a long tiring day, we need some refreshment at night. And girls like you invite us to satisfy our desires.”

For the next half an hour, the girl kept on crying in pain, yelling for help. But as always, there was no one to help her.

He stopped his bike and breathed heavily to control his temper. The girl was brutally raped and no one in the city could help her. No wonder why the city was called the national rape capital of India. He pushed the gear change lever from his left toe and took out his fury on the throttle. The speed of the bike reached 100km/hr.

He thought to himself, ‘Police will find these men sooner or later. But that’s not going to do any good. Even if the case goes to fast track, it will take another 6-10 months for the court to come to the conclusion. Even if they are sentenced to death, they will plea to High court, then Supreme Court and so on. There isn't going to be any justice. Our judicial system is literally blind. Sometimes, justice has to be delivered outside the court. Sometimes, justice has to be done outside the law.’

He reached Chandni Chowk. The conditions at late night were just the opposite of what it would have been in day. It was silent and few stray dogs were roaming the streets. The road was illuminated by the yellow hue of the street lights. He took a left turn towards the Nayi Sadak, the road which connects Chandni Chowk with Chawari Bazar.

Nayi sadak was quite wide as compared to the other streets of Old Delhi. It was flanked by multiple storey buildings on both sides. The lower storey buildings were essentially the shops where, generally, pirated copies of all sort of books were sold at almost half the original price. For this reason, it was pretty popular among students.

He stopped his bike in front of a building. He pushed the side stand down by the heel of his left foot and rested the bike on it. He swung his right foot to get off the bike. He then pulled out a black woollen Balaclava from the back pocket of his jeans and wore it over his face. The balaclava covered his entire head and face except for his eyes. There was a narrow staircase going upwards towards the first floor.  He climbed up to the first floor and found an iron grilled gate to his left. He saw three men sitting inside and playing cards. He could also see bottles of alcohol lying around them.

One of the three was playing a video on his mobile phone. A sound of a girl’s cry was coming out from the video. “What a hot clip man!” said the man.

“Yeah! And it’s hotter when you were the part of it,” said another man by throwing a card in his move. They all guffawed.

Watching from outside, he clenched his fist in anger. ‘These scoundrels made a video of that poor girl,’ he thought to himself. The anger made his face shiver. He gathered all his rage and kicked the iron door. The door opened with a bang.

All three of them looked at the door in surprise. The first man stood up and said, “Abey O! Who are you? What the hell are you doing here?”

He lifted a wooden chair kept on his right and slammed it on the man approaching him. The chair struck with such force that it broke into two pieces. The man fell on the ground holding his head and screaming in pain. The man felt warm liquid coming out of his head slowly. It was blood.

He lifted the broken pieces of chair again and hit the man lying on the ground several times until he stopped screaming. He was about to turn towards the other two men when he saw the second man swinging his hand towards his face. He felt a hard blow on his face and stepped backwards. He shook his head to get back to his senses.

“Who are you?” said the second man and again swung his arm to hit him. This time, he was ready and ducked immediately. Taking the support from the ground with his hands, he lifted his left leg and kicked the second man below the belt.

The third man ran towards him, but before he could hit him, he held his neck. He tightened his grip on the third man’s neck and threw him on the wall. The man’s head banged on the wall and he wailed out in pain. He walked back to the second man who was trying to get up. He clenched his collar and hit on his face several times until the blood gushed out of his mouth.

“You were feeling hot listening to the cries of the girl. Now it's my time. SCREAM!” shouted the man and hit him on his face. “The screams of the poor girl are still echoing inside my head. Your screams should be louder than her! SCREAM you bastard!” He hit several blows on his face. “Your screams should overpower the screams of that innocent girl. SCREAM you scoundrel!” He  kept on hitting his face until he found his body had become motionless. He didn’t know if the man had died or just passed out. He got up and walked up to an iron trunk kept on the corner of the room. He picked it up and smashed it on the man. He was dead now.

Finally, he turned towards the third man who was still holding his head. The third man cried, “Who are you? That girl’s brother? Or father? Or husband? Why are you killing us?”

He pulled his hair to make him stand up. “Do you think I am avenging what you did to her?” he said. “This is not a revenge. This is JUSTICE.”

He smashed the man’s head several times on the wall.

“People like you are like virus, viruses that are infecting our society. Viruses that are spreading Epidemics. And viruses can never be contained. They are always killed. Viruses like you have to be uprooted from the society.”

He took him towards the opposite wall which was facing the street. There was a glass window in the wall. He kicked him in his stomach. The man’s body hit the glass window. The glass broke and his body flew out of the window.

He reached to the window to see the lifeless body of the man lying on the road.

Next morning he was at his workplace, sitting with his elbows on the desk and hands covering his face. He was thinking about the incident of last night.

“Inspector Prabhat,” the man had to call him by his name. Hearing his name, he removed his hands from his face and turned towards the man calling him. It was Constable Gopal.

“What happened?” he asked.

“Sir, we have found the culprits of that girl’s rape case,” replied Constable Gopal. “But they are all dead! Someone brutally killed them last night in a house in Nayi Sadak.”

Inspector Prabhat stared at Constable Gopal without any expression on his face. But on the inside, he was smiling softly with satisfaction. Justice had been served.