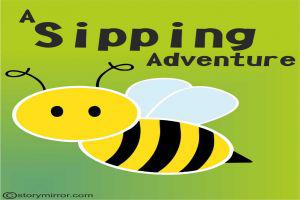 Vyanka felt excited and happy. The older bee at the swarm told her the day before that she will take her along with her to bring nectar to the hive. After hatching from the egg, Vyanka is spending her days inside the cells of the hive. The nurse bees fed her with rich pollen and nectar and now she has grown stronger with strong wings. Vyanka stretched her little wings and eagerly waited for her first fly out into the sunshine. Vyanka could not sleep in peace; she kept on asking questions to the other bees.

The day dawned. Vyanka can see light rays peeping slowly from the east. The worker bees that usually go for hunting nectar and pollen started to leave with a buzz. Swarm of bees lifted up in the air with a uniform buzz. Vyanka joined them with much cheer. The swarm of bees started to fly in the air.

For the first time, Vyanka realized that the bees flew drawing patterns in the air. The paths took different shapes along with the difference in the buzz also. Another bee that flew near her told that the drawing patterns showed the directions to go. Finally, they reached a big pond full of lotus flowers.

Lotus buds in the pond looked elegant and beautiful. The petals of the lotus flowers started to unfurl in a soundless rhythm. Vyanka joined the swarm and started to sip the nectar from a beautiful lotus flower that bloomed in the middle of the pond. Vyanka did not feel tired. For more than ten times she has flown back to the hive with plenty of pollens and nectar.

The older bee told Vyanka that it is enough for the day and asked her to rest at the hive. Vyanka out of excitement flew one more time to the pond. The evening started to set in. The lotus flowers slowly started to close their petals together. The lotus flower blooms for more than three days. But, every day in the evening, the petals will close together and the flower will start to unfurl once again the morning. Vyanka does not know about this. When she finished collecting nectar for the day, she tried to fly away from the flower. She hit at the sides of the petals and fell down in the soft bed of pollen sacs. Vyanka blinked hard. Her multiple eyes could not see anything in the dark.

When Vyanka got caught inside the lotus flower, every one started to search for her in the cells of the hive. The older bee asked them to wait till morning. After spending a restless night inside the lotus flower, Vyanka looked at the unfurling petals of the lotus flower. Streaks of morning light peeped inside the flower. Vyanka flew out of the flower with speed. When she crossed the pond, she met the whole swarm that eagerly buzzed for her. Every one asked her what happened. Vyanka with nervousness told them what happened. The whole swarm broke into a buzzing laughter and teased her with their peculiar dance. Vyanka blushed with shame.