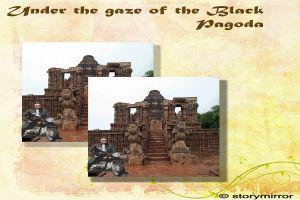 Under The Gaze Of The Black Pagoda
★★★★★

Satish looked at the people queuing opposite the ticket counter outside the temple wall. He had parked his motorbike across the road, right opposite the main gates of the Sun Temple of Konark. This location gave him the best view of all the people going in. At the distance, the stupendous pyramid of the Black Pagoda dominated the landscape.

Satish glanced at his watch. The clock hands were at ninety degrees. ‘Hey Jaganath, it’s already three – where is she?’

He looked at his reflection in the bike mirror, combed his hair with his fingers, adjusted his blue-tinted sunglass and rubbed his clean-shaven chin. ‘Pura Hero.’

The rumble of a heavy engine forced him to look to his right. A Orissa Road Transportation bus slowed down opposite him, blocking his view of the gates.

When the bus departed Satish found a girl in blue and white Salwar Kameez – the student uniform of a local college. She stood facing the gates. Her hair was neatly tied behind her in a ponytail.

The girl turned around. Her face sent a thrill through his body. She grinned. He grinned back as he got down from his bike. He removed his sunglasses and moved towards her.

As they stepped inside the temple premises, he put his arm around her shoulders.

“Not here.” She gently pushed his arm down.

“Come on. Who will recognise you here? All of them are tourists,” Satish protested.

Satish sniggered. Neeta pretended to be upset. She started to walk fast, leaving him behind. He caught up with her.

“All right, all right, calm down. It was just a harmless joke. You know very well I don’t know your Papa.” He tried to stifle his laugh.

“I don’t like such stupid jokes. And, you’re right, you don’t know my Papa. The moment he sees me with you that’s the end of our relationship. He will arrange my marriage with someone else – not with you, because you’re not employed.”

They went under the stone arch entrance. The lush green lawns encircling the Nata temple – the Dancing Hall and the Jagamohana – the Audience Hall, were blazing in the autumn sunshine.

They squeezed past a group of tourists standing in a semi-circle opposite their guide.

“The temple was designed as a chariot of the Sun God with seven horses and twenty-four wheels,” the guide was explaining in a loud voice.

Satish nudged Neeta as they passed the base of the Nata mandir. Delicately carved sculptures protruded from the walls, depicting couples in amatory poses. “Ah! Look at them. These people were having a good time, weren’t they?” He stopped for a moment to gawp at the figures.

Neeta blushed and giggled. “Come on now. Don’t start all that again.” She pulled his arm.

“See, we even shy away from talking about these things. And we call ourselves modern,” he smiled mischievously.

As the visitors swarmed around the temple structures, Satish and Neeta slipped out of the temple premises through the gap in the edge of the back wall.

“Why do we always have to take the temple route?” Satish began as they stepped out of the temple lawns, onto the lone gravelly path cutting through the casuarina plantations leading to the beach.

“Aw! I don’t want to go to the main beach entrance. It’s too crowded. And you know I don’t like people gawking at us.”

“I’m tired of all this lying and hiding Neeta. Only a few weeks are left for my final exams. I’ll definitely get a job soon. You won’t have to make up any more excuses after that.” He put his arm around her. “I’ll talk to your parents once I get a job.” He pressed his cheek to her temple. The path became soft with every step; the mud and pebbles making way for sand. The casuarina trees whispered and swayed in the wind. The sea breeze caressed them as they reached the beach. Their feet sank in the sandy floor as they walked.

“The tide is high today. No need to go any further. Let’s sit here,” Neeta kicked her sandals away. As they sat next to each other, she pointed to the left. In the distance, scores of people crowded the beach. “See that’s why I prefer the temple route.”

“Well, I think you have to discover a new route now,” Satish pointed to the right.

A horde of people were cavorting on the beach far away. They seemed to be students on a picnic.

“They won’t come here,” he said and turned towards her. He tried to kiss. She shied away. “Now what?” He pretended to be surprised.

“Nothing. I’m not in the mood yet. Let’s talk for some time.”

In the next instant, he lay down, resting his head on her lap. She caressed his hair. He sighed. She smiled. They looked at the solitary cloud above, listened to the hushed roar of the waves, felt the warmth of the beach, gazing at each other’s faces with moist eyes, relishing the silent pleasure of each other’s company. These were the moments they lived for, which their society always denied them.

They heard voices close to them. Satish lifted his head to see two people walk towards them. Neeta gently pushed his head down back onto her lap and put her head down – her long, silky hair shielding their faces from them.

They heard whistles and laughter. Neeta had hoped these intruders on their privacy would just pass by without further troubling them. But, the disturbance didn’t seem to end. “C’mon, do something more, we’re bored,” said one of them, followed by a snigger. There were further lewd comments.

Satish wanted to get up. She murmured her refusal.

The malicious duo were determined to ruin their romance. The catcalls continued.

Neeta couldn’t stop Satish from getting up. He looked at the two youngsters. They wore white tees with the acronym of their institution flashed in bright letters across their chest. Satish couldn’t recognise the institution. It didn’t seem local.

“Hey! What’s your problem?” Satish stood up. Both of them were smaller than him.

But that didn’t seem to bother them.

“Oye, don’t try to be a hero, okay?” The thinner of the two said, coming closer. Their bodies only inches apart.

“Shut up and get lost,” Satish said looking down on him. The other guy, the healthier of the two, rushed towards Satish and gave him a push. He fell back.

Neeta stood up and shrieked.

They were clearly looking for a fight.

In an instant, Satish sprang up and floored the guy who had pushed him with a punch. Before his partner could react, Satish thrust his forehead into the other guy’s face. He flew backwards from the blow, clutching his nose, writhing in pain. Both of them struggled to their feet and started running towards their group. Satish wanted to chase them, but was held back by Neeta, who now was crying.

Satish and Neeta watched as one of them started yelling at his friends for help as they approached them.

“Let’s go Satish,” Neeta tugged his shirt. They made their way back, walking briskly. Just as they were about to leave the beach, they glanced at the students. The two were surrounded by their classmates. They were pointing towards Neeta and Satish.

The next moment, a dozen of them started running towards them.

“Time to run,” Satish grabbed Neeta’s hand as they took to their heels. As they reached the temple premises, they still continued to run. People idling in the lawn and those huddled in groups close to their guides looked with interest as they rushed past them. Neeta was breathless by the time they reached the temple gates. Satish kick-started his bike, Neeta sat behind him. Just before he turned the throttle valve, he glanced through the grilles of the main gates. He could see few people in white tees in the distance. Neeta held him tightly, wrapping her arms around him as they sped away. She repeatedly turned her head to look back. If a vehicle tried to overtake them, it would send a chill down her spine. Everything appeared normal on the roads behind. No one seemed to be chasing them. After a while, when they were far away from the temple, Neeta asked him to drop her at the nearest bus stop.

“I’ll drop you home, Neeta. You’re too stressed,” Satish said turning his head towards her.

“No! Don’t be crazy. Papa must be on his way back home from office. Drop me at the bus shelter after the junction,” she said as they waited at the traffic intersection.

Cars, buses, motorcycles and autorickshaws were crowded ahead, waiting patiently for the traffic lights to turn green.

A town bus slowed down beside them. People gaped at Neeta from the bus. Dark clouds of smoke escaped from the exhaust pipe as the driver intermittently revved the engine. Neeta coughed as the smoke enveloped them. Satish moved ahead, manoeuvring his Honda through the maze of vehicles around them, before squeezing it in-between an autorickshaw and a car.

Satish caught sight of the man peering out at them from the autorickshaw. “People have no decency these days,” he said turning to Neeta.

“Why? What happened?” Neeta was still looking at the traffic lights ahead.

“Just look at that bald man staring at us from the auto.”

Neeta turned to look at the man glaring at her. Bald and stern. His eyes narrowed and sharp. She turned pale. Satish felt her grip loosen around his waist. Neeta slid down from the bike and raised a trembling hand to her lips.

Under The Gaze Of The Black Pagoda