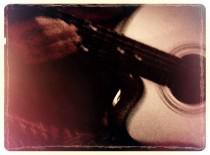 “You’re a failure. Life is going to swallow you whole. It’ll completely crush you and you'll have nothing left. What are you going to do when this happens? You have no future. You’re a failure, nothing but a failure.” She whispers this in the hushed silence. It’s dark. There’s nothing here but the two of us. And she’s doing most of the talking. I sit across from her, letting her words surround me. I shift uneasily in my seat, occasionally glancing at her as she speaks, sitting tall and erect. She’s not an animated speaker, but she speaks with a quiet conviction that is unearthly.

She goes on talking; retelling haunting memories in that same hushed tone, each one proving her point more.

I pause for a minute.

And then I collapse, falling into her words. “It’s got to be true then”, I say, staring into the distance.

I’m filled with this feeling, a blend of remorse, guilt and regret – all of them the same in essence but donned in different, more destructive disguises. I take quick, shallow breaths. My head is heavy and pounding with every breath I take. My stomach is in knots. I dread to think of the future. I can feel her every word hitting me like a blow in the stomach. I just want to give up. To cease. To cease to think. To cease to exist. I just want to rid myself of her haunting words.

My head is worn out, I can feel it going round and round in exhaustion…like a roundabout…in a fair… with clowns… and rabbits… magicians…tricksters.

I lull over each word aimlessly, embracing delirium as a welcome distraction. And then I jolt.

Vague memories of this word uttered by a low voice drift through my mind, frame by frame. Trickster… cheat… that’s it.

I yell out, “You’re a trickster, a cheat. I don’t believe a word of what you’re saying and I don’t care. It’s not true. You’re nothing but a cheat.”

I pause, cautiously surveying the results of my outburst.

She stops, clearly taken aback. But she just shoots a small, disparaging smile at me and continues talking. Her eyes are fixed steadily on mine, daring me to oppose her. I collapse into my chair – a sign of defeat. Her eyes are still on mine, black and soulless.

I look into them.

And then I stand. I walk towards her and stop at her chair. I lean down and say quietly, “I think its best that you leave. I have no use for you here. And you are under my control after all.”

She drags her chair back and stands. She looks at me again for a brief second, a wavering glance. I look at her and smile, but somehow it doesn’t reach my eyes. She walks out without a word, her footsteps echoing into the distance. I watch as she leaves, fazed by the entire incident. But like I said, she is under my control after all.

A Conversation with her