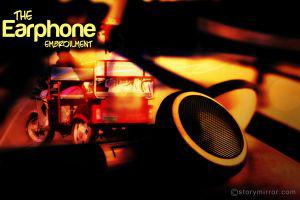 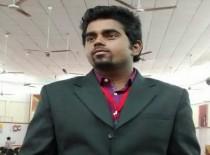 Shall I take off these earphones?

The first day of college somehow did not hold the same position of sanctity in my mind as it did for most of my peers. The exit to the hostile Vishwa Vidyalaya metro station loomed ahead, the threshold to a new world that beckoned me. I was aware of the multitude of students around me, moving with the unusual combination of glee and indifference. I was aware of them, yet at the same time my earphones ensured that I was cut off from these aliens. And for this, I was glad.

Naturally, the solitary rickshaw in a sea of more efficient e-ricks became my preferred mode of transport. The driver, like all rickshaw drivers, was a faceless creature. I can recall the back of his head, adorned with dirty, curly black hair. Halfway to college, an unusual situation presented itself before me. The driver started moving his lips in strange fashion and glancing back towards me. He was talking, obviously, but my earphones made him seem like a mad mute.

Shall I take off these earphones? Surely, nothing so important was being spouted from that masala-stained mouth that I may be coerced to remove my beloved earphones? Soon enough, the driver went back to his normal faceless self, and the rest of the ride to the castle of education went smoothly, save for the well-meaning speed breakers.

The first day of college exceeded my expectations, and being a cynical pessimist, that meant bad news. I considered myself a self-afflicted patient of avoidant personality. People brought out the worst in me, without exception. And here in college were all sorts of people, and hence, all sorts of rejections. I had long ago made my peace with my unpopularity. Yet, each new wound carried the same old sting.

The first day became the first week and gradually a month was past, but my earphones were still there, constant in this ever changing picture. Another fixture surprisingly became the rickshaw driver, the same curly haired one. Rajkumar was his name; I once had the courtesy to ask. And he was a seemingly amiable person, always talking, asking questions to which he never received any replies. Rajkumar was there every morning at the station to pick me up. No words were ever exchanged but a sense of gratitude passed both ways. I was curious about him, I admit, but I still did not take my dull earphones off.

Mother became sick in the third month of college, sicker than I’d ever seen her. And I, helpless and friendless, continued to be greeted by Rajkumar each morning. In hindsight, his was the only face that ever smiled at me in Maurice Nagar. I had started college with a false sense of superiority, with condescension and obnoxiousness as my rightful weapons, and my earphones as my means. Now I was buried deep with an inferiority complex and my earphones as the shields to the judgmental eyes of people.

I stayed home gladly for a week to take care of my mother, and no nook or corner of the college was missed. I missed the rickshaw rides though and the speed bumps that added additional beats to the lovely music. I decided then, as I fetched pills for my mother, that I would converse with Rajkumar, make one friend at least.

When I returned to college after my prolonged absence, Rajkumar was nowhere to be found. Foolish I had been and cheated, I felt, thinking I had been a friend, and not merely a source of income. Yet, I held out hope for the next day, as I hopped in a crowded E-rick, clutching my crucial earphones closer than ever. But the next day and every day after that, the curly and mangled head of Rajkumar did not show up. It was funny how I missed a friend whom I knew nothing about. I should have taken those wretched earphones off.

And I did, on a fateful Wednesday, take them off. On asking around the metro station rickshaw drivers I received news that made my stomach drop. Malaria had consumed Rajkumar when I had been tending to my mother. Such a feeling of regret and loss washed over me that I was left rooted at the spot. I would never know who Rajkumar was, the positive fixture in times of turmoil. Perhaps he had told me about his village, about is wife and his children. But I had never listened. I didn’t even remember his voice. He had said a lot and I, not a word.

I seized the evil earphones from around my throat and planted them firmly in the nearest trash can.

At home, in the evening, I talked to my mother. She lived.