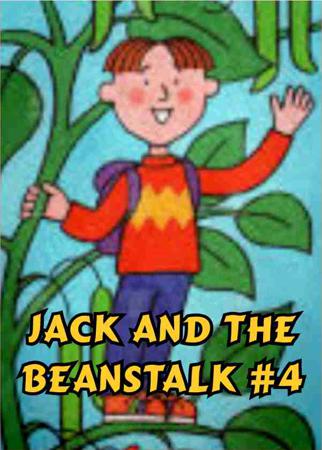 A little way off there was a great castle, with a broad road leading straight up to the front gate. But what most surprised Jack was to find a woman who suddenly appeared beside him. She was tall, elderly and distinguished-looking.

“Good morning, Jack,” said she; and Jack was more surprised than ever, for he could not imagine how she knew his name. But he soon found that she knew a great deal more about him than his name; for she told him how, when he was quite a little baby, his father, a gallant knight, had been robbed and slain by the giant who lived in yonder castle, and how his mother, in order to save Jack, had been obliged to promise never to tell the secret.

“The giant stole from your father a magic hen that lays golden eggs,” she said, “The hen and the gold it has produced rightly belong to you and your mother.” And with that she disappeared quite as suddenly as she came.

“She must be a fairy,” thought Jack.

As he drew near to the castle, he saw the giant’s wife standing at the door. The giantess looked kind and friendly, and Jack was not frightened. “If you please, ma’am,” said he, “would you kindly give me some breakfast? I have had nothing to eat since early yesterday.”

As Jack had guessed, the giant’s wife, unlike the giant, had a kind heart, so she said: “Very well, little man, come in; but you must be quick about it, for if my husband, the giant, finds you here, he will eat you up, bones and all.”

So in Jack went, and the giant’s wife gave him a good breakfast, but just as he finished it there came a terrible knock at the front door, which seemed to shake even the thick walls of the castle.

“Dearie me, that is my husband!” said the giantess, in a terrible fright; “we must hide you somehow,” and she lifted Jack up and popped him into the empty kettle.

Jack and the Beanstalk #4