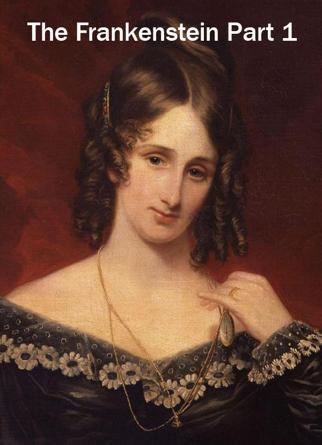 I was born in Geneva. My father was a magistrate. I had a little brother

Elizabeth living with a poor family in Italy. She was gentle and very

beautiful, with golden hair and blue eyes. Her real parents, an Italian

nobleman and a German lady, were both dead. My mother and father

adopted Elizabeth and brought her to our home.

Elizabeth and I grew up together, and we were very happy. I spent my

wanted to be a poet. He loved nature and beauty, but I was interested in

science. I wished to make some great scientific discovery. I wanted wisdom

and knowledge, and I wanted to succeed where other men had failed.

When I was seventeen, my parents decided to send me to the university at

Ingolstadt, but my departure was delayed by the first misfortune of my life.

Elizabeth became ill with scarlet fever, and my mother nursed her.

Slowly Elizabeth recovered, but my mother caught the illness from her.

When my poor mother was dying, she called us to her bedside and said,

'Dear Victor and Elizabeth, your father and I hope that one day you two will

marry. Be happy, my children, and take care of little William.'

She died calmly. How can I describe our sadness? There is no need.

Everyone knows that sadness, or will know it one day. A few weeks later I

went to the university in Ingolstadt. I walked around the town during the

first three days. I met some of my professors and fellow students, but I felt

lonely and disappointed. I had no desire to study. Then I went to hear a

lecture by Mr Waldman, the professor of chemistry. At the end of the lecture,

he spoke of modern chemistry in words I will never forget.

'Modern chemists can perform miracles,' he said. 'They have followed

Nature to her hiding places. They have penetrated her secrets. They have

discovered how the blood circulates. They understand the nature of thunder

destroy me. I left the lecture full of a new ambition. 'I will discover new

things in science,' I thought. 'I will explain the mysteries of creation.'

'The next day I went to Mr Waldman. 'I wish to be your student,' I said. He

showed me his laboratory and told me what books to read. My future was