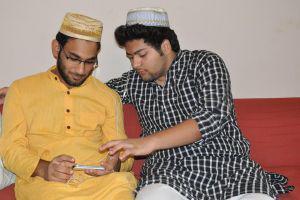 “I am not going to school from tomorrow. It sucks!”

Surprised at his outburst, I cautiously asked, “Anything the matter, dear?”

“I was not allowed to enter class after assembly. And later I was sent to the Headmistress’s office.”

“But what happened? What did you do?”

All sorts of unpleasant thoughts crept up my spine and spun havoc in my head. For a 12th grade boy to be hauled up thus, the matter had to be pretty serious. I knew it did not have anything to do with his academic performance - his teachers had already given up on that!

“Well,” he said, “they were livid because I hadn’t shaved.”

“Hmmm, yes, you are looking rather untidy. I have been telling you all week to do that, haven’t I?” I looked at the rather rough growth of hair on his chin, and all along his jawline - fuzzy, untended growth.  Secretly, I was glad he had been ticked off at school. Perhaps now he would take better care of his personal grooming. I had despaired at the several attempts made in this direction. Many a times I had even threatened to smear a lavish amount of Anne French hair removing cream on his face while he slept.

Chiding him sternly, I asked him to go to the barber as soon as lunch was over.

But the matter was not over yet. Sensing there was more to it, I prodded him further. It turned out that I had been summoned to the Headmistress’ office the next day. My son was at once on the defensive.

“What’s wrong with growing a beard, Mom? Tell them I’m a Muslim. It is mandatory for me to keep a beard.”

“As a good Muslim, firstly it’s mandatory for you to offer namaz five times a day,” I replied. His habit of not shaving had already been the cause of many a heated argument at home.

Next morning, the Headmistress was clearly exasperated. “He has been given many warnings over the past few weeks. Now some strict action has to be taken. The Principal has said that boys who don’t shave (Sikh boys exempted) will be locked up in the gardener’s shed for the whole day and then suspended for three days after that.”

Her tone brooked no argument. I was flabbergasted on hearing this and decided it was time I spoke up, not just in defence of my son but in protest against this outrageous punishment outlined as I mentally vowed to take this up with the Child Rights Commission or Human Rights Commission or whichever appropriate agency if the threat was indeed implemented. I was clearly alarmed at the humiliation my son or any of the other boys might have to endure. After all, what did a few wisps of hair matter? Wasn’t it a part of growing up, part of the painful realities that adolescence brings. But to make such an issue about it really didn’t make any sense to me.

“And then there is the Supreme Court verdict too,” she added. Looking at my son she continued, “Hasn’t the Principal already spoken to you all about it?” He nodded in the affirmative sticking his chin out, a chin covered in defiant, unruly hair.

I had not heard about this ruling earlier as I had been living out of the country for several years and had not quite followed what went on in India too closely. I decided to check this out with a friend of mine, an advocate with the Supreme Court of India. It turned out that there had been a controversy some years ago regarding a Muslim student in a Christian minority school in Bhopal who was rusticated on the grounds of his keeping a beard as against the rules of the school. This boy later took up the matter in court in defence of his keeping a beard as a religious obligation. My friend explained that, though, under Article 25 of the Indian Constitution, every Indian had the fundamental right to freely profess, propagate and practice their religion, under Article 30, minority institutions had the right to frame their own set of rules which were binding on all students irrespective of their faith. So, if the school forbid students to keep a beard, they had to comply with this. Sikh boys though were exempt from this as growing hair on the head and face is an important obligation of their religion whereas in Islam it is Sunnah (preferred) but not compulsory.

So, it seems that in secular India, religious beliefs cannot be overstretched.  Are people afraid that permitting young Muslim boys to grow a beard is a step towards “Talibanisation” of the country and hence this practice should be nipped in the bud?

However, in the end, I reasoned that in the case of my son it was just to make him look neat and presentable. He did manage ultimately to toe the line and visit the barber regularly. But to my consternation, the beard did not go away completely.  While the untidy crop was done away with, the barber fashioned him a thin line along his jawline, a beard that was there as he wished yet not offensive enough to cause his school to send for me again. Thankfully they left it at that.

I, too, was gently cautioned by my son that this was his personal matter and he would brook no interference. Reluctantly, I acceded.  Henceforth, to beard or not to beard - I left it to my son’s discretion.

To Beard Or Not To Beard