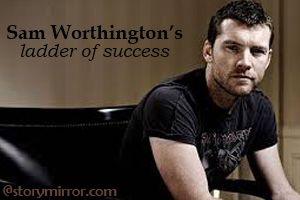 Known for a plethora of roles, this name is a live story that describes how a ladder of success is climbed. His story conveys: Be yourself, Love yourself...Come What May.

Who does not knows Sam Worthington today? He was Jake Sully in Avatar; Marcus Wright in Terminator Salvation; Alex Mason in the video game Call of Duty: Black Ops; and Perseus in Clash of the Titans.

Well, born to British parents, Jeanne and Ronald Worthington, Sam wanted to pursue his desire to study drama right from his childhood. When he was only six months old, his parents migrated to Australia. There he attended John Curtin College of the Arts. However, he could not complete the course and dropped out. After this, he had to do several awkward jobs like working as a bricklayer at a civil construction site. At the age of 22, he graduated from Australian National Institute of Dramatic Art (NIDA), in the year 1998. After two years, in 2000, he was in for critical acclamation for the Australian movie Bootmen. He also performed as side hero in movies like ‘A Matter of Life’ and ‘Hart’s War’. Later in the year 2004, he got a major role in the movie ‘Somersault’ that received the highest number of awards including ‘Best Lead Actor’(for lead role in movie) from Australian Film Institute.

Now he was an internationally renowned actor. In 2005, he worked for the movie  ‘The Great Raid’. He also did certain minor roles in varied Hollywood productions.  His career zoomed up with his performance as Jake Sully (James Cameron’s Avatar), and as Marcus Wright (Terminator Salvation) in the year 2009. There was no looking back after this. He did high profile roles in leading movies like the ‘Clash of the Titans’, ‘Texas Killing Fields’, ‘Man on a Ledge’ and several others. He even gave the audio voice for Call of Duty: Black Ops video games.

Sam Worthington describes his success story and says that when he was in his twenties he thought that he knew himself quite well. However, when he reached his thirties, he realised that he had certain flaws like bruises and bumps. All he did was to embrace them and go on... instead of feeling regret... or forcing himself to change.

And the rest is History....