Quotes New
Audio
Forum
Read
Contests
More
Write
Sign in
Wohoo!,
Dear user,
“The Change Starts Within Each One Of Us”- Craig Kielburger
Like
Liked
Rate
Like
Liked 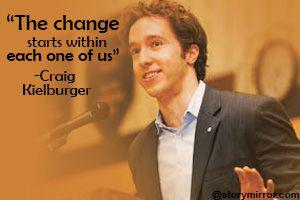 “The Change Starts Within Each One Of Us”- Craig Kielburger
★★★★★

Craig Kielburger said, “We so often feel powerless to do anything about the many problems in the world around us. We are so often left to wonder whether one person can possibly make a difference. Mother Teresa said, ‘yes we can.’ Her life was resounding proof that it is possible.”

Craig Kielburger is an activist from Canada who is widely acclaimed for fighting for children’s right. He is a hard core contributor who helped in achieving  the noble mission of liberating the slaved and entrapped children across the world. When he was 12, he was like any other playful child, but one incidence mentioned in the morning newspaper changed his life. He was completely shattered  when he read about 12 year old Iqbal Masik who was brutally killed for fighting against enslaving children in Pakistan.

Iqbal Masik was a worker in a carpet factory and was working there since the age of four. He used to work nothing less than 12 to 14 hours each day. He had no life and continued to work there for the next eight years as well. Iqbal did not know the existence of school, he had never played or for that matter ever lived a life of a normal child.

After reaching the age of 12, he was freed by the police. Now Iqbal wanted to let the people know about his enslavement. He wanted the people of the world to know that they were ill treated,  illegally and immorally used for various wrong purposes. Iqbal narrated how pathetic their life was; they were brutally beaten, forced to work and even starved. However, before the truth could be revealed to the world, Iqbal was murdered mysteriously about which no one knows till date.

Craig Kielburger was taken aback to know the end of the story and he decided that it was about time that he took the story of Iqbal to the world. He and his seven classmates founded a union called ‘Twelve-Years-Old’ which was later called ‘Free The Children’. Child labour was brought to public’s attention. At the age of 14, he started working full fledged to fulfil Iqbal’s dream. He began to visit the slums, went to the dark and narrow alleys and  stopped over at  various tea shops  of South Asia with police to look for locked-up and exploited children to release them free. He completely devoted himself  to improve the lives of under privileged children in developing countries.

Craig had to face several problems initially since many politicians and others could not digest the fact that a young boy of such tender age was fighting for a cause that was a matured and serious issue. His efforts have already erected more than 650 schools in more than 45 countries. Today ‘Free The Children’ has grown into an international charity that has over 1.7 million youth attached to its education development programs.

Craig has been credited and awarded on many occasions for his highly significant contribution to society. He has won awards like The Nelson Mandela Human Rights Award, The 2004 Kiwanis International Foundation World Service Medal, The 2002 World of Children Awards – Youth Award. He also has to his credit Honorary Doctorate of education from Nipissing University, Honorary degree in law from University of Guelph, and several others.

“The Change Starts Within Each One Of Us”- Craig Kielburger