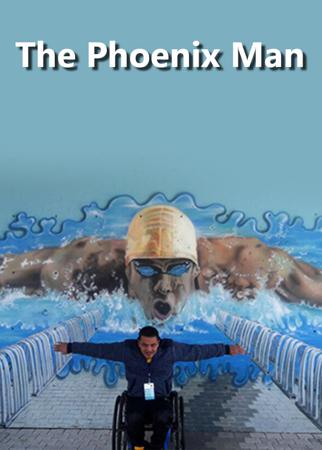 Story of the Phoenix Man, a living example of utter inspiration. He is a man of influence.

Go-getters are very limited in this world. Every man faces milestones before reaching the desired goal but very few have the patience to stay until you achieve it. Many loose the will halfway.

Shams Aalam is one of those who doesn’t believes in giving up. He has come up like a phoenix bird from the ashes. Every time he was devastated, he came out even stronger.

He has grabbed our attention with his accomplishments. He was born in 1986 on 17th July, in traditional family of farmers, in Bihar.

He was very fond of sports since his childhood. His mom said that when he was 2 years old, since then he used to swim in the pond nearby.

At the age of six he shifted to Mumbai, with his brother for studies. He completed his graduation. Earlier, before the injury he used to do karate, he belongs to a sportsmen family background. It was in his genes. He secured a black belt in it.

But when it comes to swimming, it is a therapy for him, a tool that helped him to recover his physical strength, he does swimming not only to take part in the competition but also to take care of his health.

His life has definitely changed after the injury, but one thing that remains common is sports. Earlier it was karate, now it is swimming. Initially he used to swim only as a part of therapy and now pursues it as a professional sport and also to regenerate his nervous system. But then people say, ‘once a sportsman always a sportsman.’ After the injury, he started finding ways to continue with sports in life. He came to know about Paralympics, in which one can represent his country. He started working hard, taking part in competitions. For him, sports is like blood in his veins, sports take him forward, and allow him to stay positive.

He could never part himself from sports. His love for sports comes from his nana, who was a wrestler. Art of Swimming is natural in him. Although he wanted to pursue karate, but he never thought that swimming will become his career or rather the purpose of his life.

It is often said, that ‘people can steal your wealth but not the skill within you.’

Because of swimming he has seen new dreams again, his life has taken a different turn because of it.

He wants to represent his nation in swimming, and make the country proud. He was accounted as a Para swimmer, in Asian Para games, he was not able to win a medal for India but came 4th in 100m breast stroke, in SB4 category, 5th position in 50m butterfly. He is preparing for his next mission, World Championship that is going to take place in 2019.

Certainly, parents play a very important role in every aspect of life. Specially his mom supported him and motivated him. When this injury happened, he was in the hospital, he had lost all hope. One can understand that a young man who is good in health till the age of 21-22, and then suddenly he is unable to lead that life, he lost the freedom of moving his limbs of the body at his will.

His sister too formed a great support system, later his father also started supporting him.

Because of this support that he has, he is able to focus on the sports, because of which his overall ranking in Asia is 4th. Another thing that he wants to share with his fellow people that his mom expired recently on 14th Oct. She fell off on 2nd of Sept, and got a severe fracture in her spinal cord, even then she was very strong, when Shams Aalam got selected in Asian games, he asked his mom what should he do? She told him to go without any fear, God will be by his side, and focus on his game, concentrate only on performance . He pulled himself together and went for it.

Though when he was returning, at Malaysia Kuala Lumpur airport, he got this news from his elder brother, that mom was not well and he asked him to come soon. Shams Aalam was about to reach Delhi at 7:30 pm. On reaching Delhi, he got a call from him again, stating that their mother was no more. She passed away that day itself at 4 pm. It was a very sad incident. But he still keeps her words in mind, he works hard, for her mom and the country.

He has a message for the society. Never lose hope in life because nothing is impossible, man can change his life, he can make a difference at any age, any condition. Keep your goals aligned, figure the way out to reach there, put your heart and soul together and you will notice that nothing is un-achievable. Because I have experienced this, that when nobody is there to support you, your passion will.

Make our society accessible, whenever you spot any disabled person, give a smile. Give them your empathy not sympathy because even we have those qualities like a properly abled man. Please make your corporate and companies accessible for people like us too to work there, improve ourselves. We shouldn’t go through this feeling of discomfort or discrimination.