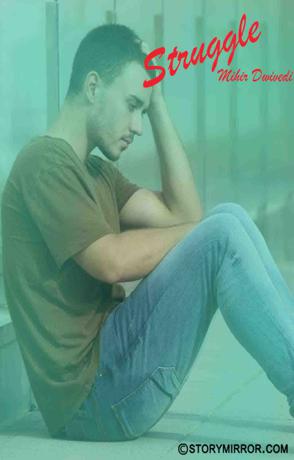 This story is about Rahul who is born in a middle class family in lucknow to a clerk father and a housewife mother. He was the single child who went to the one of the best schools in the city, however the salary of his dad was not enough to help his son with other luxuries of a kid's life. Luxuries for Rahul were like a cricket bat of his own or a handy video game. Whenever he used to watch ads of MCdonalds he use to think that these restaurants or these hot wheels toys are only possible if his dad is a rich man, but he always knew that his dad is not rich. He saw his mother talking to his dad about the last 200 rs which was only left in the house that too in the beginning of the last week of the month. His dad used to do overtime in his railway office just to make it possible for his son to continue his schooling in the best school.

Rahul was a bright student till 8th standard and was really doing well in academics, but destiny has planned something for him. As he moved to 9th standard he developed liking for his classmate Ritika, who belonged to a wealthy background. It was his first love which was blowing his mind. One can easily find her name in the last page of all the books. He started following her but knowing the reality that he does'nt have much to explain her or offer her, he dropped the plan. He also made friends who all were from very well to do families.

So it all starts here, his friends Raju (who was the only son of the district magistrate of the city), Deepu ( who was the son of the chief engineer for the state), Raghav( who was the son of a very famous builder). These three were the best friends to him. It was 10th boards and Rahul scored 88% marks. His parents were very happy and one can make out from there face that now their son is ready to be an IITian or an IAS.

Now these four were like brothers. Rahul's family was still under financial crisis but for rahul life has changed altogether. Roaming in cars of his friends.going malls with them, watching all the new movies in theatre. Dating girls with his friends money. It was now that he realised that a burger in Mcdonalds costs only 25 Rs.

Soon  results were out for 12th. He knew he has not done well, but he kept on lying to his parents that he will score good marks. It was the result day and Rahul scored 60% marks with P.C.M. He came back home with a very heavy heart. His dad was also waiting for his results eagerly as today is the day when his son will change the future for his family. His mother was in the temple since morning, praying to god for his good scores. As soon as he comes back his mother and father both go to open the gate together. On seeing their excitement rahul starts crying and he confesses about the grades he has scored. His mother was into tears. His father was taken aback as he knew that all the hardwork he did to make his son a scholar has gone in vain. His father started hating him. For the first time in his life Rahul was slapped and beaten by his father. Rahul now almost knew that he has no future for him. He thought he should prepare for engineering entrance exams and once he gets selected into some good college, he will make his parents proud.

He was trying to get through any of the entrance exams in order to get out of his house as his dad did'nt like his sight any more. He filled hotel management forms.He went to IHM and did his degree. He got placed into one of the best hotels in the country in mumbai.

Once he reached mumbai in 2007 he realised that beuing from a small town and from a weak background, it was not easy to survive this showfull and flashy life. His first job was as a luggage porter. He knew somewhere in his mind that he has to do big otherwise he has to go back and live with the regret that he was a loser who was running away from struggle. He took his job seriously. He saw his colleagues who has better communication and fashion skills with their ultra modern i phones, but he really never felt bad about it. Rather he tried to be equal or more to them just by working. There were days when he used to work for 18 hrs. in a day just to be in the hotel and learn differen aspects of a hotelier life. Days were passing and in 2008 he was working as a receptionist in the same hotel. He was working hard on his communication skills. P.S his salary in the very start was just INR 8000. He grew to a supervisor level in the same hotel within 1 and a half year. He was considered as the fastest employee in that hotel when it came upto billings or guests requests. His loyality towards work and his company gave him that extra edge over other colleagues. He was transferred to Maldives as Assistant Manager. Till this time he only spoke to his mother and not even a single time spoke to his father. He never went back home just to prove to his father that his son will not let his father's hard work go in vain. Time passed by and today this 2015. He is General Manger of a 5 star luxury hotel in delhi. His father is a proud dad and his mother proudly fights with his dad saying i thought i have lost my son because of you.

Last evening during an interview to hotelier's India magazine he was asked this question that what he thinks he thought motivated him to grow so fast as he is the youngest general manager till date for his company.

He simply replied " His father's struggle".