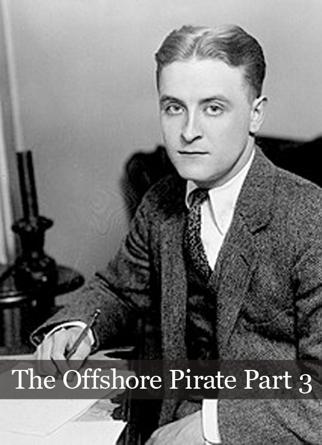 Within ten minutes after Curtis Carlyle’s interview with a very frightened engineer the yacht Narcissus was under way, steaming south through a balmy tropical twilight. The little mulatto, Babe, who seems to have Carlyle’s implicit confidence, took full command of the situation. Mr. Farnam’s valet and the chef, the only members of the crew on board except the engineer, having shown fight, were now reconsidering, strapped securely to their bunks below. Trombone Mose, the biggest negro, was set busy with a can of paint obliterating the name Narcissus from the bow, and substituting the name Hula Hula, and the others congregated aft and became intently involved in a game of craps.

Having given order for a meal to be prepared and served on deck at seven-thirty, Carlyle rejoined Ardita, and, sinking back into his settee, half closed his eyes and fell into a state of profound abstraction.

Ardita scrutinized him carefully — and classed him immedialely as a romantic figure. He gave the effect of towering self-confidence erected on a slight foundation — just under the surface of each of his decisions she discerned a hesitancy that was in decided contrast to the arrogant curl of his lips.

“He’s not like me,” she thought “There’s a difference somewhere.” Being a supreme egotist Ardita frequently thought about herself; never having had her egotism disputed she did it entirely naturally and with no detraction from her unquestioned charm. Though she was nineteen she gave the effect of a high-spirited precocious child, and in the present glow of her youth and beauty all the men and women she had known were but driftwood on the ripples of her temperament. She had met other egotists — in fact she found that selfish people bored her rather less than unselfish people — but as yet there had not been one she had not eventually defeated and brought to her feet.

But though she recognized an egotist in the settee, she felt none of that usual shutting of doors in her mind which meant clearing ship for action; on the contrary her instinct told her that this man was somehow completely pregnable and quite defenseless. When Ardita defied convention — and of late it had been her chief amusement — it was from an intense desire to be herself, and she felt that this man, on the contrary, was preoccupied with his own defiance.

She was much more interested in him than she was in her own situation, which affected her as the prospect of a matineé might affect a ten-year-old child. She had implicit confidence in her ability to take care of herself under any and all circumstances.

The night deepened. A pale new moon smiled misty-eyed upon the sea, and as the shore faded dimly out and dark clouds were blown like leaves along the far horizon a great haze of moonshine suddenly bathed the yacht and spread an avenue of glittering mail in her swift path. From time to time there was the bright flare of a match as one of them lighted a cigarette, but except for the low under-tone of the throbbing engines and the even wash of the waves about the stern the yacht was quiet as a dream boat star-bound through the heavens. Round them bowed the smell of the night sea, bringing with it an infinite languor.

Carlyle broke the silence at last.

“Lucky girl,” he sighed “I’ve always wanted to be rich — and buy all this beauty.”

“I’d rather be you,” she said frankly.

“You would — for about a day. But you do seem to possess a lot of nerve for a flapper.”

“I wish you wouldn’t call me that”

“As to nerve,” she continued slowly, “it’s my one redeemiug feature. I’m not afraid of anything in heaven or earth.”

“To be afraid,” said Ardita, “a person has either to be very great and strong — or else a coward. I’m neither.” She paused for a moment, and eagerness crept into her tone. “But I want to talk about you. What on earth have you done — and how did you do it?”

“Why?” he demanded cynically. “Going to write a movie, about me?”

“Go on,” she urged. “Lie to me by the moonlight. Do a fabulous story.”

A negro appeared, switched on a string of small lights under the awning, and began setting the wicker table for supper. And while they ate cold sliced chicken, salad, artichokes and strawberry jam from the plentiful larder below, Carlyle began to talk, hesitatingly at first, but eagerly as he saw she was interested. Ardita scarcely touched her food as she watched his dark young face — handsome, ironic faintly ineffectual.

He began life as a poor kid in a Tennessee town, he said, so poor that his people were the only white family in their street. He never remembered any white children — but there were inevitably a dozen pickaninnies streaming in his trail, passionate admirers whom he kept in tow by the vividness of his imagination and the amount of trouble he was always getting them in and out of. And it seemed that this association diverted a rather unusual musical gift into a strange channel.

There had been a colored woman named Belle Pope Calhoun who played the piano at parties given for white children — nice white children that would have passed Curtis Carlyle with a sniff. But the ragged little “poh white” used to sit beside her piano by the hour and try to get in an alto with one of those kazoos that boys hum through. Before he was thirteen he was picking up a living teasing ragtime out of a battered violin in little cafés round Nashville. Eight years later the ragtime craze hit the country, and he took six darkies on the Orpheum circuit. Five of them were boys he had grown up with; the other was the little mulatto, Babe Divine, who was a wharf nigger round New York, and long before that a plantation hand in Bermuda, until he stuck an eight-inch stiletto in his master’s back. Almost before Carlyle realized his good fortune he was on Broadway, with offers of engagements on all sides, and more money than he had ever dreamed of.

It was about then that a change began in his whole attitude, a rather curious, embittering change. It was when he realized that he was spending the golden years of his life gibbering round a stage with a lot of black men. His act was good of its kind — three trombones, three saxaphones, and Carlyle’s flute — and it was his own peculiar sense of rhythm that made all the difference; but he began to grow strangely sensitive about it, began to hate the thought of appearing, dreaded it from day to day.

They were making money — each contract he signed called for more — but when he went to managers and told them that he wanted to separate from his sextet and go on as a regular pianist, they laughed at him aud told him he was crazy — it would he an artistic suicide. He used to laugh afterward at the phrase “artistic suicide.” They all used it.

Half a dozen times they played at private dances at three thousand dollars a night, and it seemed as if these crystallized all his distaste for his mode of livlihood. They took place in clubs and houses that he couldn’t have gone into in the daytime After all, he was merely playing to rôle of the eternal monkey, a sort of sublimated chorus man. He was sick of the very smell of the theatre, of powder and rouge and the chatter of the greenroom, and the patronizing approval of the boxes. He couldn’t put his heart into it any more. The idea of a slow approach to the luxury of liesure drove him wild. He was, of course, progressing toward it, but, like a child, eating his ice-cream so slowly that he couldn’t taste it at all.

He wanted to have a lot of money and time and opportunity to read and play, and the sort of men and women round him that he could never have — the kind who, if they thought of him at all, would have considered him rather contemptible; in short he wanted all those things which he was beginning to lump under the general head of aristocracy, an aristocracy which it seemed almost any money could buy except money made as he was making it. He was twenty-five then, without family or education or any promise that he would succeed in a business career. He began speculating wildly, and within three weeks he had lost every cent he had saved.

Then the war came. He went to Plattsburg, and even there his profession followed him. A brigadier-general called him up to headquarters and told him he could serve his country better as a band leader — so he spent the war entertaining celebrities behind the line with a headquarters band. It was not so bad — except that when the infantry came limping back from the trenches he wanted to be one of them. The sweat and mud they wore seemed only one of those ineffable symbols of aristocracy that were forever eluding him.

“It was the private dances that did it. After I came back from the war the old routine started. We had an offer from a syndicate of Florida hotels. It was only a question of time then.”

He broke off and Ardita looked at him expectantly, but he shook his head.

“No,” he said, “I’m going to tell you about it. I’m enjoying it too much, and I’m afraid I’d lose a little of that enjoyment if I shared it with anyone else. I want to hang on to those few breathless, heroic moments when I stood out before them all and let them know I was more than a damn bobbing, squawking clown.”

>From up forward came suddenly the low sound of singing. The negroes had gathered together on the deck and their voices rose together in a haunting melody that soared in poignant harmonics toward the moon. And Ardita listens in enchantment.

Carlyle sighed and was silent for a moment looking up at the gathered host of stars blinking like arc-lights in the warm sky. The negroes’ song had died away to a plaintive humming and it seemed as if minute by minute the brightness and the great silence were increasing until he could almost hear the midnight toilet of the mermaids as they combed their silver dripping curls under the moon and gossiped to each other of the fine wrecks they lived on the green opalescent avenues below.

“You see,” said Carlyle softly, “this is the beauty I want. Beauty has got to be astonishing, astounding — it’s got to burst in on you like a dream, like the exquisite eyes of a girl.”

He turned to her, but she was silent.

Again she made no answer. She had been sound asleep for some time.