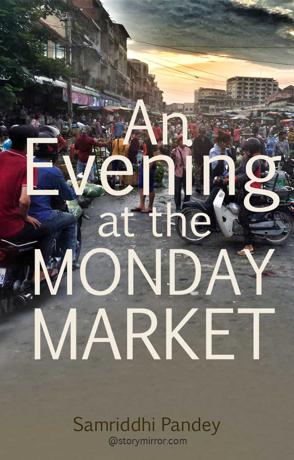 An Evening At The Monday Market
★★★★★

I returned home from college as usual at 4'O clock in the evening. As I reached home, exhausted, I collapsed onto the couch, kicked off my shoes and returned to my usual mood of sad contemplation. The transition from school to college had not been easy, especially when I saw that other students were way more talented than me. Just then the phone buzzed and I answered it to find whether my grandmother wanted me to accompany her to the Monday market for buying vegetables. I reluctantly said yes as I thought that shopping for vegetables in the Monday Market would be a fitting end to an already boring and sad day. It had rained in the afternoon and the weather was beautiful with occasional gusts of wind. My spirits lifted a little.

The marketplace was an hour’s drive away from my place. The narrow, dirty lanes lined by small brick houses presented a stark contrast to the tall buildings in my locality.

As I reached the market, a mixture of curious smells greeted me. The streets were jam-packed. Almost every inch was occupied by various vendors who displayed their wares on carts. My grandmother then spotted a vegetable vendor, pushed her way through the crowd and started her usual bantering, bargaining, and haggling. I started to walk behind her, putting whatever vegetables she brought into my bag. Initially, my bad mood prevailed because of the jostling and the hustle and bustle of the crowd but gradually I started to observe my surroundings. I saw carts laden with an assortment of fruits, glossy tomatoes, dull looking onions and potatoes, and other green leafy vegetables. The vendors were shouting on the top of their voices, some were arranging their wares on the carts, a young boy was slicing a big jackfruit, some were counting money. I became aware of various sounds and smells; the sound of people shouting, banging of weights, the clinking of coins, the rustle of polyethene bags.

From time to time many scooters and bikes parted the crowd to pass through just as Moses had parted the sea. I saw young boys eating fried Jalebis. A group of giggling girls was enthusiastically trying on various necklaces, rings, rubber bands and clips. A mother was pushing her child in a pram while buying vegetables. For several minutes I amused myself by making funny faces and blowing kisses at the child and bit by bit I forgot about my own problems and began to actually enjoy myself. The frown on my face got replaced by a big smile. My attention  wavered  and I saw that a cow had barged its way into the market and the vendors took turns to feed it by throwing cabbages at it which it would catch and subsequently munch contentedly.

Then I saw that a pet dog had managed to break free from its house. It stealthily made its way towards the tomato vendor’s cart and when the vendor was not looking, the dog succeeded in stealing a tomato and ate it. A stray dog followed suit and both the dogs continued to steal and eat the tomatoes until the vendor spotted them and shooed them away. I burst into uncontrollable fits of laughter after viewing this incident. Finally, my grandmother completed her shopping . I was so engrossed in viewing the surroundings that I became completely unaware of the time and the growing weight of vegetables in my bag.

As I sat in the car which drove me back home, I began to gaze at the sky streaked with the colours of sunset. I realised that life had its own ups and downs. After all, how would we know about the existence of happiness without sadness?  As children, we were constantly directed to the right path either by our parents or our teachers but as adults, we need to find our own way through the mysterious labyrinth of life. Times come when we feel like giving up, but in times like these, mundane and insignificant things which we often ignore such as our surroundings and nature make life worth living. That day small, insignificant events cheered me up immensely.

At this juncture, a quote by Albus Dumbledore comes to my mind, “Happiness can be found in the darkest of times, only when one remembers to turn on the light”

That day, I reached my home in high spirits, ready to face the challenges of college life.

Next week my grandma called me, “want to go for shopping again”? She asked.

I happily nodded my head in acknowledgement.

An Evening At The Monday Market