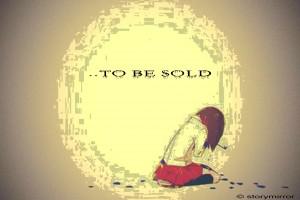 It started with a slight drizzle, the afternoon was sluggish the day Nyati figured out she would be sent away. Her parents were very poor and couldn’t even afford two meals a day. Weathering the ups and downs in her family and including the additions in there had merely ceased their being to be in this world.

Like a man with a hole in his pocket; who had already spent his world without realizing he didn’t even have an ounce to pay back,  the village of Baghdad had its inhabitants in bulk, where money was at its utmost scarcity. People there were poor and were in need of money that could flow from anywhere and at the cost of anything.

Back then in Zaveri Bazaar it was a primordial folklore or what one would call as another brutal scheme to rubble off women sanctity. Middle East region was a vast and rich trading market for sense gratification. To them it was a need; hence every year in the month of November an exposition of young ladies took place. For those ill-fated parents who could not afford to earn a living for their family had the right to sell off their daughters in return for money.

This doomsday took place on the 25th of November each year where traders from all regions would come and pick their prey at a price they liked.

Nyati was the daughter of an ill-mannered peasant, Kantilal; who lived in Baghdad with his family for the past 35 years. Poverty since then had been like his breath by the help of which he had to live all day.  Regardless of his patchiness, lust consumed a large space in his life too. The upshot of which were half a dozen children his wife had delivered. Therefore, Nyati being the oldest child had to bear the brunt of it all because her 3 younger sisters and 2 brothers were small and distant from having reached puberty. She was also a part of the entire mirage and was carrying a “To be sold” tag with her like the other unfortunate girls that year.

Like an epitome of need, those soiled traders had their eyes lingering
over Nyati scrutinizing every bit of her. They passed by and mumbled her price in the father’s ear as the tradition was. A simple nod meant a yes; after 2 hours full of gawking was there a waggle on Kantilal’s head. Hence, she was sold at price best suited to him. The man who had bought her was named Jalil Malik, a wealthy inhabitant of Jeddah. He was into Hospitality business all over Saudi Arabia and was also quite popular amongst all the traders in there. He was tall fair and had a huge mustache right under an aquiline nose. The very sight of the man threatened Nyati to such an extent that she started shivering and had tears trickling down her subtle face. Her delicate face line already seemed to have broken its amiability; every minute passing by evolved only fear, despising the life she was going to live, here on.

Kantilal had but a distorted grin on his face because he now was the owner of a heavy sum of money; something he always wanted to own but at the cost of his own daughter. Nyati’s mother hoisted in the corner, entirely broken feeling relentless and suicidal over what had happened.

Jalil asked Kantilal to come aside and speak to him for a bit. Assuming the discourse to be a torpid exchange of nothing but conditional words to be mounted for the purchase…

Time went fast, Nyati had very few memories to cherish with her family because since birth she was attached to that destitution no one could alter. She always felt she was unlucky and useless. As soon as the deal took place Nyati solemnly ran down the lane to her home, she was to leave. With a somber heart, that had nearly collapsed, she took a look at that tiny one-room house she lived in. At the farthest corner lay her ailing younger brother along with the mother, motionless; on the count of the trial they were to face.

Barely 15 minutes passed and Kantilal entered the shed signaling Nyati to leave. Jalil was to meet them at the lobby of the hotel he checked in the day earlier. They were both ready to leave the house oblivious to what future had in store for them. Jalil was waiting for them beforehand with his suitcase, all set to leave. He gave Kantilal the money duly promised. Jalil promised Kantilal, he would make Nyati work for one of his hotels and take good care of her.

That one venomous look at her, Nyati felt her heart go numb. Kantilal looked at his daughter and could barely let his eyes meet hers. He walked out of the hotel without uttering a word to Nyati, who stood there with a tiny suitcase she had previously packed. A few ragged clothes, one torn shawl she assumed would help her keep warm in the unruly winters and the oldness of 10 she walked into the unruly phase life hummed the tune for…

Mother had nothing for a say, she battled her own stake. Those tears streaming down her face was guilt for what had happened or fear for her petite daughter’s time ahead.