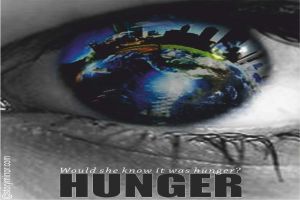 “Eyes are the biggest betrayers. Some say eyes are windows to the soul. Who knows if they are… or if there is a soul… But betrayers, yes, the eyes are… if you are not careful, they let your secrets out… especially your desires. You know, hunger shines in the eyes before it can be seen in any other way. Even if for a second before you hide it. Take care to wipe it out of your eyes before someone sees it. Or they will think less of you. You are not a poor little famished girl, are you? Where are your manners?” Grandma’s words echoed in Riya’s ears while she was looking at Preeti.

Yes, there was a definite flicker of unguarded hunger before Preeti lowered her eyes and pretended otherwise. How did she know to do that? Did her grandmother also tell her the same thing? How to hide one’s desires and hunger? Did these kids also get lessons in manners the same way?

Riya normally was a very well-mannered girl, also because she was given more to savor before she was hungry. And all of nine, she knew very well how to not come across as hungry, especially when there was company around. If it weren’t for her favourite chocolate chip cookies which weren’t given to her very liberally, grandma wouldn’t have needed to say those words… ever. But they were right in front of her when the guests were busy chit-chatting and laughing over… well… mostly Greek to her. Grandma had caught her stealing a hungry look and Riya fervently hoped no one else did. These guests were very ‘important’ to her parents. Anyway, grandma had eyes of a hawk, Riya thought to make herself feel better.

But in the morning today, Riya had seen the same look in Preeti’s eyes. Preeti, their maid’s daughter, roughly the same age as Riya, was eating heated leftovers from yesterday’s dinner outside kitchen while Riya was having breakfast watching her favourite movie on the big screen in their media room. What was Preeti hungry for, Riya wondered. Fresh food? Big screen? Both? Something more? Riya had no way of knowing. Even though Riya wasn’t forbidden to talk to Preeti, talking to her was generally futile. Preeti would just lower her eyes, look at the floor shyly as if all the answers were buried deep inside the floor.

Morning turned into afternoon and afternoon was giving way to an early evening. Riya was feeling restless. She couldn’t understand why some people liked holidays. For her Sundays were not as interesting as school days. There were a lot of friends in school. Riya liked to talk and snicker, much to her teachers’ reproval. She was bored in the house. She had played her board games, used up her weekend quota of screen time and had talked to grandma who was happily snoring away now. She couldn’t go to park today as it was raining lightly. Actually, she could, she would’ve loved to, but she wasn’t allowed to. She caught colds easily.

Maybe that was true when she was younger… maybe now she had grown up to be sturdier… she thought wishfully. She decided to ask mom anyhow. Mom had been on a call for the last 45 minutes. She was forbidden to go into her room while she was on an official call. She waited. When she didn’t hear her mom’s voice for a couple of minutes, she ventured in. By the look of things, the call was on hold for a while and mom was busy pounding on her laptop.

“Mom… can I go to the park to play?” Riya asked meekly.

“What? Have you seen the goddamned weather? Go ask didi to put a mosquito repellent patch on your dress.” Mom shrieked and in the next moment said sweetly into the phone, “Yes, I understand… I have received the mail…” and shooed Riya away with a gesture of her hand.

Riya went to the covered balcony and looked out to the open ground that had a slum kind of colony touching it at the other end. Riya used to imagine that ground as a vast sea that lied between two different kingdoms or two entirely different worlds. She had heard her mom refer to the slum colony as an eye-sore, a security threat as well as a huge convenience in this goddamned city where domestic help was always scarce.

It had started pouring now. Rain drops were making excited loud noise while they touched soft, muddy, partially-covered-with-grass ground. Riya’s heart was thumping with the beat of that noise.

There she saw her. Preeti was playing with a bunch of children in the rain. They were running and jumping all over the place. They almost seemed to dance with the music rain was making, all soaked and drenched. Preeti didn’t look like a girl who found talking a task. She was giggling and making faces. A boy pulled her plait and she ran after him. Both of them slipped in a puddle they hadn’t anticipated. They laughed louder lying all smeared in wet mud while their friends joined them in the laughter.

Riya couldn’t help laughing either. She wouldn’t know whether Preeti could hear her from that far in the rain but that’s when Preeti saw her.

It was just a fraction of a second!

And Riya quickly turned her back to the balcony and ran inside. She could tell Preeti had seen something in her eyes. And Riya was horrified.

Would Preeti know it was hunger?