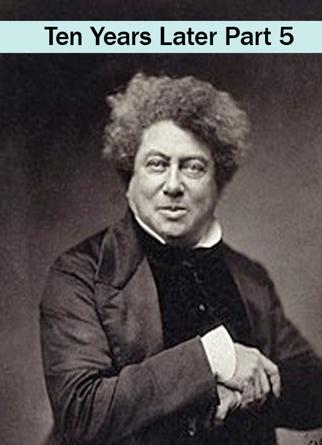 Malicorne, then, left Blois, as we have said, and went to find his

friend, Manicamp, then in temporary retreat in the city of Orleans. It

the last decent clothing he had left. He had, a fortnight before,

extorted from the Comte de Guiche a hundred pistoles, all he had, to

assist in equipping him properly to go and meet Madame, on her arrival

at Le Havre. He had drawn from Malicorne, three days before, fifty

pistoles, the price of the _brevet_ obtained for Montalais. He had then

no expectation of anything else, having exhausted all his resources,

with the exception of selling a handsome suit of cloth and satin,

embroidered and laced with gold, which had been the admiration of the

court. But to be able to sell this suit, the last he had left,--as we

to take to his bed. No more fire, no more pocket-money, no more

walking-money, nothing but sleep to take the place of repasts, companies

and balls. It has been said--“He who sleeps, dines;” but it has never

Manicamp, reduced to this extremity of neither playing nor dancing, for

a week at least, was, consequently, very sad; he was expecting a usurer,

and saw Malicorne enter. A cry of distress escaped him.

“Eh! what!” said he, in a tone which nothing can describe, “is that you

“Ay, but look you, I was expecting money, and, instead of money, I see

“And suppose I brought you some money?”

“Oh! that would be quite another thing. You are very welcome, my dear

And he held out his hand, not for the hand of Malicorne, but for the

purse. Malicorne pretended to be mistaken, and gave him his hand.

“And the money?” said Manicamp.

“My dear friend, if you wish to have it, earn it.”

“What must be done for it?”

“And after what fashion?”

“Oh! that is rather trying, I warn you.”

“You must get out of bed, and go immediately to M. le Comte de Guiche.”

“I get up!” said Manicamp, stretching himself in his bed, complacently,

“You have sold all your clothes?”

“No, I have one suit left, the handsomest even, but I expect a

“Well, if you look, you will see them on that chair.”

“Very well! since you have some _chausses_ and a _pourpoint_ left, put

your legs into the first and your back into the other; have a horse

saddled, and set off.”

“No, I thought he was at Paris. You will then only have fifteen leagues

to go, instead of thirty.”

“You are a wonderfully clever fellow! If I were to ride fifteen leagues

in these clothes, they would never be fit to put on again; and, instead

of selling them for thirty pistoles, I should be obliged to take

“Sell them for whatever you like, but I must have a second commission of

“Good! for whom? Is Montalais doubled, then?”

“Vile fellow!--It is you who are doubled. You swallow up two

“You should say, that of M. le Comte de Guiche and yours.”

“That is true; honor where it is due; but I return to my _brevet_.”

“And you are wrong.”

“My friend, there will only be twelve maids of honor for madame; I have

already obtained for you what twelve hundred women are trying for, and

for that I was forced to employ all my diplomacy.”

“Oh! yes, I know you have been quite heroic, my dear friend.”

“We know what we are about,” said Manicamp.

“To whom do you tell that? When I am king, I promise you one thing.”

“What? To call yourself Malicorne the First?”

“No; to make you superintendent of my finances; but that is not the

“My friend, if you were to promise me the price of heaven, I would

decline to disturb myself at this moment.”

Malicorne chinked the money in his pocket.

“And what would you do with twenty pistoles, _mon Dieu!_”

“Well!” said Malicorne, a little angry, “suppose I were to add them to

the five hundred you already owe me?”

“You are right,” replied Manicamp, stretching out his hand again, “and

from that point of view I can accept them. Give them to me.”

“An instant, what the devil! it is not only holding out your hand that

will do; if I give you the twenty pistoles, shall I have my _brevet?_”

“Oh! take care! Monsieur de Manicamp; you undertake much, and I do not

ask that. Thirty leagues in a day is too much, you would kill yourself.”

“I think nothing impossible when obliging a friend.”

“You are quite heroic.”

“Where are the twenty pistoles?”

“Here they are,” said Malicorne, showing them.

“Yes, but my dear M. Manicamp, you would consume them in post-horses

“No, no, make yourself easy on that score.”

“Pardon me. Why, it is fifteen leagues from this place to Etampes?”

as many for coming back, twenty-eight! as much for bed and supper, that

Manicamp stretched himself like a serpent in his bed, and fixing his two

great eyes upon Malicorne, “You are right,” said he; “I could not return

before to-morrow;” and he took the twenty pistoles.

“Well, as I cannot be back before to-morrow, we have time.”

“What do you wish to play with?”

“And what shall be the object of the wager?”

“This. We have said it was fourteen leagues to Etampes.”

“And fourteen leagues back?”

“Well; for these twenty-eight leagues you cannot allow less than

“One hour to find the Comte de Guiche.”

“And an hour to persuade him to write a letter to Monsieur.”

“Sixteen hours in all?”

“You reckon as well as M. Colbert.”

“It is now twelve o’clock.”

“What were you saying?” said Malicorne, putting his watch quickly back

“Ah! true; I was offering to lay you twenty pistoles against these you

have lent me, that you will have the Comte de Guiche’s letter in--”

“Have you a winged horse, then?”

“That is no matter. Will you bet?”

“I shall have the comte’s letter in eight hours?”

“Well, be it so; I lay,” said Malicorne, curious enough to know how this

seller of clothes would get through.

Manicamp raised himself with a sigh, and leaning on his left elbow, in

“Good for an order for a place of maid of honor to Madame, which M. le

Comte de Guiche will take upon him to obtain at sight. DE MANICAMP.”

This painful task accomplished, he laid himself down in bed again.

“Well!” asked Malicorne, “what does this mean?”

de Guiche for Monsieur, I have won my wager.”

“How the devil is that?”

“That is transparent enough, I think; you take that paper.”

“And you set out instead of me.”

“You put your horses to their best speed.”

“In six hours you will be at Etampes; in seven hours you have the letter

from the comte, and I shall have won my wager without stirring from my

bed, which suits me and you too, at the same time, I am very sure.”

“Decidedly, Manicamp, you are a great man.”

“I am to start then for Etampes?”

“I am to go to the Comte de Guiche with this order?”

“He will give you a similar one for Monsieur.”

“Well, I hope I behave genteely?”

“You do as you please, then, with the Comte de Guiche, Manicamp?”

“Except making money of him--everything?”

“_Diable!_ the exception is annoying; but then, if instead of asking him

“What do you call important?”

“Well! suppose one of your friends asked you to render him a service?”

“I would not render it to him.”

“Ah! that, perhaps, is fair. Well, that friend speaks to you.”

“I have still fifty pistoles left.”

“Exactly the sum I want. Where are those fifty pistoles?”

“Then speak, my friend; what do you want?”

Malicorne took up the pen, ink, and paper again, and presented them all

to Manicamp. “Write!” said he.

“An order for a place in the household of Monsieur.”

“Oh!” said Manicamp, laying down the pen, “a place in the household of

“You mistook me, my friend; you did not hear plainly.”

“And the five hundred?”

Manicamp devoured the rouleau with his eyes; but this time Malicorne

held it at a distance.

“Eh! what do you say to that? Five hundred pistoles.”

“I say it is for nothing, my friend,” said Manicamp, taking up the pen

again, “and you exhaust my credit. Dictate.”

“Ah! that is true. The five hundred pistoles?”

“Here are two hundred and fifty of them.”

“And the other two hundred and fifty?”

“When I am in possession of my place.”

“In that case give me the recommendation back again.”

Manicamp began to count out the pistoles.

“There want twenty,” said he.

“The twenty I have won.”

“Ah! that’s fair,” and he gave him the twenty pistoles.

Manicamp began to scoop up his gold by handfuls, and pour it in cascades

“This second place,” murmured Malicorne, whilst drying his paper,

“which, at first glance appears to cost me more than the first, but--”

He stopped, took up the pen in his turn, and wrote to Montalais:--

“MADEMOISELLE,--Announce to your friend that her commission will not be

long before it arrives; I am setting out to get it signed: that will be

twenty-eight leagues I shall have gone for the love of you.”

Then with his sardonic smile, taking up the interrupted sentence:--“This

place,” said he, “at first glance, appears to have cost more than the

first; but--the benefit will be, I hope, in proportion with the

expense, and Mademoiselle de la Valliere will bring me back more than

Farewell, Manicamp,” and he left the room.