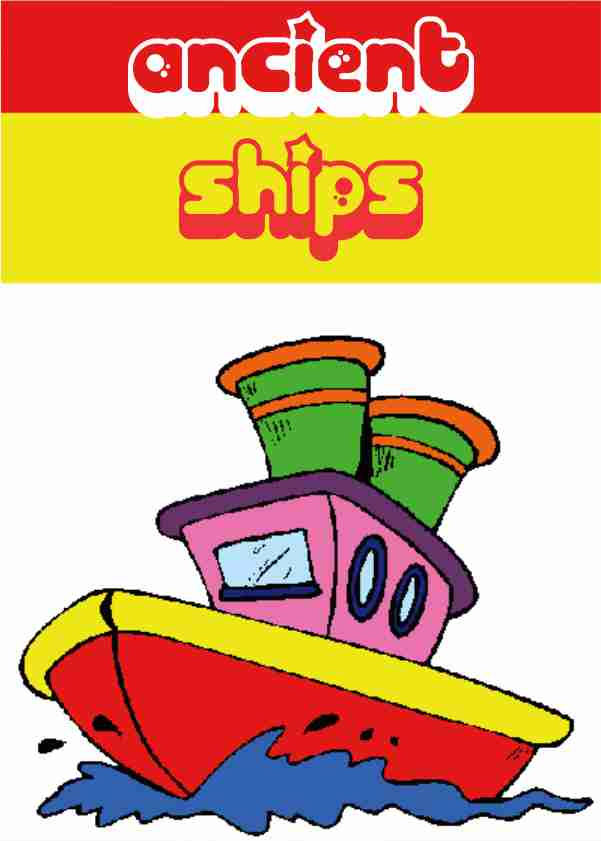 [121] THE ships in olden times were very different from many of those which you see now. They were not made to go by steam, but only by sails or by oars. As sails were useless unless the wind happened to blow in a favorable direction, the people preferred to use oars, as a rule.

Even large ships were rowed from one place to another by well-trained slaves, who sat on benches along either side of the vessel, and plied their oars slow or fast according to the orders of the rowing master. These ves- [122] sels with many rowers were called galleys. When the men sat on three tiers of benches, handling oars of different lengths, the boat they manned was known as a trireme.

There were other boats, with five, ten, or even twenty-four banks of oars; but for war the most useful were the triremes, or three-banked ships, and the quinqueremes, or those with five tiers of rowers. For battle, the ships were provided with metal points or beaks, and a vessel thus armed was rowed full force against the side of an enemy's ship to cut it in two.

Of all the people settled on the shores of the Mediterranean Sea, the Carthaginians were now the best sailors. They dwelt at Carthage, in Africa, and, as their city was all the land they owned there at first, they soon turned all their energies to trading.

The Carthaginians thus amassed great wealth, and their city, which was near the present Tunis, and was twenty-three miles around, was one of the finest in the world.

In the course of their journeys, the Carthaginian sailors often visited Sicily, one of the most fertile countries in the world. Little by little they began to establish trading places there, and daily gained ground in the island. The Romans saw the advance of the Carthaginians with great displeasure; for it is but a step from Sicily to the Italian mainland, and they did not want so powerful a people for their neighbors.

The city of Syracuse was at this time the largest and strongest on the island, although the Carthaginians had waged many wars against it. There was also another city that was independent, which was occupied by a band of soldiers called Mamertines. A quarrel between these [123] two cities led to war, and the Mamertines were so badly defeated that they asked the Romans for help.

When Hiero, the King of Syracuse, heard that Rome was planning to help his enemies, he sought aid from Carthage, and began to get ready for the coming war. The Romans, however, boldly crossed over into Sicily, and won such great victories that Hiero soon made peace with them, and he remained friendly to Rome as long as he lived.

The Carthaginians were thus left to carry on the war without the help of Syracuse. Now while the Roman legions were noted for their bravery on land, the Romans soon realized that Carthage would have the advantage, because it had so many ships.

A navy was needed to carry on the war with any hopes of success, and as the Romans had no vessels of war, they began right away to build some. A Carthaginian quinquereme, wrecked on their shores, was used as a model. While the shipbuilders were making the one hundred and twenty galleys which were to compose the fleet, the future captains trained their crews of rowers by daily exercise on shore.

Such was the energy of the Romans that in the short space of two months the fleet was ready. As the Romans were more experienced in hand-to-hand fighting than any other mode of warfare, each ship was furnished with grappling hooks, which would serve to hold the attacked vessel fast, and would permit the Roman soldiers to board it and kill the crew.

The fleet was placed under the command of Duilius Nepos, who met the Carthaginian vessels near Mylæ, on [124] the coast of Sicily, and defeated them completely. Most of the enemy's ships were taken or sunk, and, when Duilius returned to Rome, the senate awarded him the first naval triumph.

In the procession, the conqueror was followed by his sailors, bearing the bronze beaks of the Carthaginian galleys which they had taken. These beaks, called "rostra," were afterwards placed on a column in the Forum, near the orators' stand, which was itself known as the Rostra, because it was already adorned by similar beaks of ships.

Duilius was further honored by an escort of flute players and torchbearers, who accompanied him home from every banquet he attended. As no one else could boast of such an escort, this was considered a great privilege.