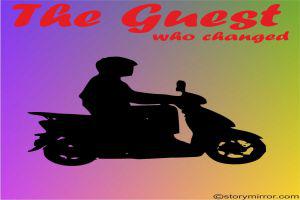 It was 5 o’ clock. At last, Amit made up his mind to go and stay at his relatives’ place that his parents were thralling upon. He never liked to stay at anybody’s place for more than a day. He was an adamant and haughty boy. He never liked sharing anything with anybody.  But now, as he had to pursue his studies and with no scope in his neighborhood, he had to go to a bigger city. He wished to stay in a hostel, but his parents could not afford all the money needed for the hostel and study together. Life seemed to be really difficult.

The train was at 9pm. He quickly packed up his luggage and all his books. Amit consoled himself that two years would go by very quickly and he could later get into a good college at another place, where no known men lived. That he will live and enjoy life as he would wish to.

At last, Amit bid adieu to his parents and sister. The next morning he was in Mr.Sharma’s house. Though everyone was familiar to him, he was feeling a bit uneasy.

The Sharmas were delighted to have him. There were only three of them- Mr.Sharma, his wife Rekha and an old man in mid-sixties- her father-in-law. Their children were married and lived abroad.

The old man was a talkative person and loved to mingle with people. He had lot of experiences to narrate. Rekha was a very sensible and nice lady. She took utmost care of Amit. She knew Amit’s nature well and adjusted accordingly. Slowly, Amit started liking the new environment. It was the interaction that he used to have with the old man on different issues during holidays that left a deep impact on him. Little did he realize that he would come to know of so many unusual things. The old man too liked Amit as his grandson was far away.

Once, when he was coming from his college, he was hit by a scooter and got injured. Mrs.Sharma took him to a doctor and nursed him. She never even told his parents about it. Amit’s mother was surprised to see the ocean change in her son She was happy to see that he was more responsible and matured.

Time flew and Amit soon finished his two years. It was time to take leave of them. He felt really bad when he was going back. It was for the first time in his life that Amit had valued somebody so much. He had lots of regards for them-especially the old man and Rekha.  He was a changed person with a better vision towards life. The results were soon out and he had secured a seat in IIT.Suratkal….far away from the maddening crowd of known men.... Yet he knew he’d miss them a lot!