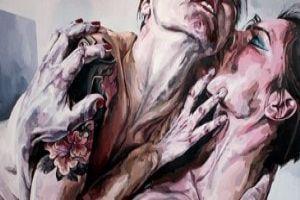 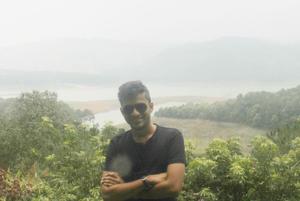 It was a dark night. Intense thoughts flew through his mind as he felt a change, a change in the flow of emotions as the cool breeze tickled his nerves in the silent night. The moon was magnificent and so were the stars, but it made no difference to him because life had caused him a lot of pain. He had been morose and emotionally shattered most of his life. He had been pestered, toyed with and cheated, far so much in life that he had eliminated words like truth, trust, respect and especially love from his dictionary, once and for all. He had never praised anyone, the reason being hatred for everything.  Being incessantly devoid of love all throughout his life had made him forget the meaning of it. He never had respected anyone but something seemed different this time. Suddenly a drop of tear trickled down his left cheek.

'It can't be possible,' he thought to himself. Something seemed to distort his vision. He remained still but his perspective seemed to comprehend a change. This change made him regain his soul. All the emotions were back. Nothing had been going on well till then, but then she undid her hair.

He had never desired something so much ever before. It was a desire to meet her, a desire to be acquainted with her and a desire to see her smile in front of his eyes. To him, she seemed too beautiful and extraordinary to understand why nobody was as perturbed as he was by the clicking of her heels on paving stones. He could not understand why no one else was bewildered by the sighs of her veils. He could not fathom the reason why no one else was mesmerized by the movements of her braid, the flight of her hands and the melody of her laughter. There he was, alone, cherishing every single one of her gestures.

He was confused. Despite the feeling being amazing, he did not understand what it was. Was it love? He was not sure because as far as he presumed he had lost his capability to love long back. Then what was happening to him? Her smile became the most beautiful thing in his life and her weeping the ugliest. She took him to an another world, an illusionary world he had created to hide from the brutalities of life. The meek possibility of ever talking to her gave him a reason to live. He forgot his being. Looking at her when she was happy became the new aim of his life. He prayed for her happiness without caring to bother whether he mattered to anyone else or not. She became his drug. Each and every emotion of the amazing lady was embedded in his heart. His day was incomplete without a glimpse of her. His pain was nothing compared to hers. He couldn't find any adjectives to describe her beauty. Words were not enough to portray his feelings. She was perfect in all aspects. According to him, even the greatest critics wouldn't be able to find a flaw in her, however hard they tried. For him, she was the personified version of happiness. Within a week, he became addicted to her and she became the most important person in his life. Why? He had no answer to this question. It was very difficult for him to apprehend the complications she had created in his life but she had something special that charmed him; something which was beyond his understanding.

The illusionary world was interrupted by the chirp of morning birds. He had found his Aphrodite despite not knowing what love actually meant. He smiled to himself thinking of how he had no idea about the complicated fix he was in. However, he was finally happy, happy to be a human again.