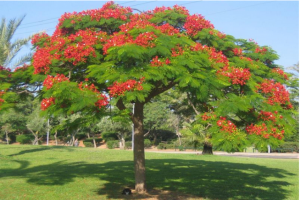 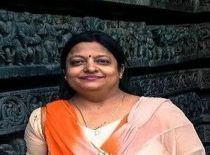 "Now that we're essentially an indoor species, walled off from the world of other life forms, we're divorced from the very domain that supports and sustains our lives." Charles Cook

An old tree of Gulmohar watched men changing stands, every now & then in a bid to make things better, was mocking at human quest. The tree was standing since ages and by now must have seen sixty to seventy springs and the evolution of men, they evolved in front of his eyes. He was the same all these years, but there was a great change in the minds of men and had experienced the changes.

There was a time when a sequence of trees stood near him, and greenery was in abundance and all life breathed fresh air and was free from life-threatening diseases. The weather was soothing and the children of the families staying nearby played in the fields in the lap of nature, and all were hale & hearty.

With the advancement in technology, the government incorporated plans to establish factories and roads and bridges to navigate people from the interiors to the workplace in towns. The men folk was thrilled and stargazed of a life thronged with comforts and a fat cash payout to meet the ends.

The plans and policies were rolled out, and mass of labours were deployed to expand factories, office establishments in connecting interiors nearing towns. Men greeted expansion with elixir and a hope of opening jobs for more people, so more jobs and more money flow in the family.

The greenery was razed down to clear lands for construction and mass of trees and plants were uprooted for the cause. Fortunately, this Gulmohar tree was lucky to be spared because it stood in one of the remote corners of the field and the land was not fit for use. He was the mute spectator of all and its heart bled inside which none could see. He lost all his friends and with it, the happiness of greenery flew away. This tree alone could not suffice the requirements of men, but couldn’t utter a word.

People were overwhelmed to see the establishments flourishing, and they were happy to see the inflow of a great number of people in interiors and slowly the place gained importance and shortlisted in the name of towns.

Gulmohar tree was left alone; he missed the groups of playing children because now there wasn’t any field for the children to play and the silence was depleted with deadly grinding sounds of machines adding noise pollution to the environment.

Waste pollution too increased, and the nearby water bodies’ water appeared as drain wells and the landowners & agriculturists moved into more interior land for farming and living.

Tall buildings were constructed to accommodate the masses working in the establishments, and the green lanes were pitched to concrete roads, and the Gulmohar tree was covered with dust and filth, and he had to wait for the monsoons to shed its dust cover, pathetic life.

Life threatening diseases enhanced encompassing the lives of the township and the major chunk of their earning was paid to hospitals & doctors to avail treatment. The business of doctors flourished, and now men ate less food and more medicines. People had lost their tranquility of mind.

In a span of three- four decades, pollution was at its height, and now men realized that loss of greenery is the reason of pollution at all levels, air, water, noise and many more.

Men wanted the greenery back, but where were the spaces to accommodate greenery. Acres and acres of ground was mowed out of greenery using the space for construction. Initially, awareness programs were started to encourage greenery in pots, terrace gardening or small space gardening to bring back patches of greenery. The huge population and small stretch of green wasn’t sufficient.

The tree watched helpless men running hither & thither to grasp fresh air, and the programs were advocated to plant a thousand trees in a month in areas, and schools and office goers participated and even awards and rewards were announced to bring back green in the town to curb pollution.

The weather had changed drastically, heat spells were unbearable, and nature’s fury was on high, and the tree found Men, most helpless creature suffering at its cost of depleting the earth of its natural resources and raising hue & cry to regain it.

People felt proud to drive in expensive and big brands of car and now helplessly brandishing to curb car movements on the road.

The Gulmohar tree was the mute spectator to feel all the impact and laughed out loud at poor thoughts of Men, who in pride of knowledge and power plundered their own life with pollution at its behest.

The tree thought if only Men would have given a second thought before mowing down, life would have been different on earth, health and happiness would have brimmed out of their life.

"Nature is what wins in the end." Abby Adams

Satire : The Tree Speaks Out