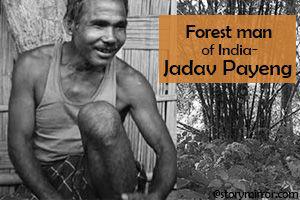 It is more than three decades now, when a little boy in his adolescent age started planting seeds on a barren land and after years of  hard work, converted it into a full-fledged jungle.

Jadav "Molai" Payeng witnessed thrashing floods in 1979 that washed away a number of snakes  onto the sandbar. Payeng was deeply moved when he saw them all dead! At the delicate age of 16, when Jadhav saw that the creatures died a merciless death just because there was no shelter of trees, he sat and mourned their death, cried hard and decided that he would not let any lifeless forms meet such an end. He alerted the department of forest about the damage,  and told them that it was very important to plant trees there. But they all reacted rather disappointingly, saying that it was not possible to plant anything there. Instead, they asked Payeng that he plant bamboos there. It was very painful for Payeng to hear all this, but he did it. There was no one to help him and he started all on his own.

Today, that once-barren sandbar is a sprawling-flourishing forest of 1,360 acres! It is a dwelling for several hundred types of trees, and an amazing variety of wildlife including deer, apes, birds, (at-least 5) tigers, elephants and rhinos. The forest is named ‘Molai Woods’ after its creator’s pet name  and is single handedly reared and cultivated by one strong headed man -- Payeng.

Today, Payeng, who sacrificed his life for the sake of unheard creatures, has reached an age of 47. He accepted a life of isolation to upkeep the growth of the forest. He was then a teenager who spent his days and nights tending the burgeoning plants.

Payeng continues to live in his forest till date where he owns a small hut and shares it with his wife and three children. He sells cow and buffalo milk for his living.

According  to officials, this is perhaps the largest forest in the middle of a river in the entire world!  Assistant Conservator of Forests came to know of Payeng's forest only in the year 2008 when they were taken aback by seeing such a dense forest.

Perhaps, the time has come when Payeng will get the help and the recognition he quite deserves.