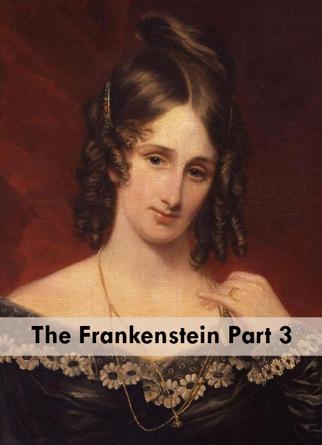 I completed my creation one cold rainy night in November. With

lay at my feet. It was one o'clock in the morning when, by the light of the

candle, I saw the yellow eye of the creature open. He breathed. He moved.

How can I describe him? I had tried to make him beautiful. Great Cod! His

skin was yellow and wrinkled. His hair was long and black. His eyes were

watery. He was monstrous!

I had worked for nearly two years for this moment. Now that the moment

had come, I felt nothing but horror and disgust. I ran out of the room. For

hours I lay awake in my bedroom, horrified by what I had done.

When at last I fell asleep, I dreamt that I saw Elizabeth, young and healthy,

walking in the streets of Ingolstadt. Delighted and surprised, I embraced her,

but when I kissed her she grew pale and cold. Her face began to change into

the face of my dead mother. She was wrapped in a shroud, and I saw the

graveworms crawling in its folds.

I woke up trembling with horror. My forehead was cold with sweat. By the

pale yellow light of the moon, I saw the monster I had created. He was

standing beside my bed, looking down at me. He made a sound, grinned at

me, and stretched out his hand to touch me. I ran away and spent the rest of

The next morning was grey and rainy. I walked the streets of Ingolstadt,

afraid to return to my apartment. Suddenly I heard someone call my name.

Turning round, I saw Henry Clerval stepping out of the coach that had just

'My dear Frankenstein!' he cried. 'I am so glad to see you! I have come to

study at the university.'

We walked to my apartment together. I asked him about my father,

'They are all well, but they are a little worried because you do not write to

them,' he said. Then he stopped and looked at me anxiously. 'But my dear

Frankenstein, you are ill! You are so pale and thin!'

I told him that I had been working too much. I did not want to think about

what had happened the night before. I was afraid to see the monster again,

but 1 was even more afraid that Henry would see him. When we came to my

apartment, I left Henry at the door. I ran upstairs and into my room

trembling with fear. The apartment was empty. Relieved, I called Henry

'Victor, what is the matter?' asked Henry.

I covered my face with my hands and said, 'Do not ask me.' Then I fainted.

Poor Clerval! I was very ill for several months. Henry nursed me. He did not

tell my family how ill I was. He did not wish to worry them.

Slowly I recovered. By the time I was well enough to look out of my

window again, it was springtime. One morning, Henry brought me a letter. It