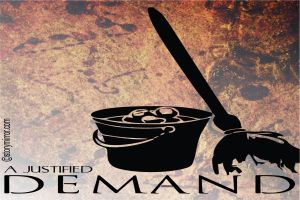 It was 10.30 AM when Keshavan reached his workplace, located in the suburbs of Chennai. Sweating profusely from the mid-summer heat, he reached his desk and took a gulp of water from the bottle kept on his table. He grimaced when he found that the water was not cold enough  to quench his thirst.

He shouted at the peon, “Hey you ! Throw this away and bring me some cold water.”

The peon retorted  like  a typical  government servant ,“ From where will I get cold water. If sahib wants cold water, he should arrange to have a machine installed”

“No coffee today, Anna (a general expression in Tamil addressing males). The nearby stall is closed today."

“Then  go and buy from some other shop, man.”

“Perhaps sahib is not aware that this is a village. The nearest coffee stall is one kilometer away. Give me 30 rupees rickshaw fare and I  will get a cup of coffee  for you”, the peon said tauntingly.

Keshavan had no option but to control his rage, lest the peon pass some more sarcastic remarks .

Keshavan had started working as an assistant  in  the bank about 25 years  ago. Since his joining, he had been posted  at the Corporate Office in Chennai. There he was used to working in  a cool air-conditioned atmosphere. There was also a well-run subsidized canteen to take care of the needs of employees. His office was also easily commutable from his residence.

He  had been leading a contented life but the need for higher pay and allowances made him take  up the  promotion to the post of Head Clerk.

A month back, he got the good news of his promotion, but along with that came the order for his  transfer to a branch office of the bank in the suburbs, situated  about 50 kilometrers from his residence . So now he had travel for more than 2 hours in crowded local trains, which became unbearable especially  in mid-summer.

Resigned to his fate, he let out a big sigh and shaken from his reverie,  looked wearily at the crowd of waiting customers.

Just then the power went off. With the ceiling fans grinding to a halt, the heat became unbearable.

He looked at the junior clerks labouring away at their respective counters and muttered to himself, “Spineless fools. They are scared to even protest for their rights to have some minimum comforts.”

But he decided that he could not take this any more. He was a very active member in the staff union and had had the experience of facing the management on various occasions.

He called all the junior clerks to his table, “ Look  my friends! Let us go and petition the manager to provide us with a standby generator.”

One of the clerks said, ”But Anna! We have already requested the manager. He said the rules state that a generator can be provided only if we  achieve a total deposit  of 5 crore rupees.”

Keshavan shouted angrily, ” Do you mean to say that till then we do not have the right to be treated like humans! Rules are made to be broken. I know a lot of such cases. If we put sufficient pressure on the manager, we will succeed.”

“ Okay! Anna! Let us talk to the manager after customer hours” another clerk said.

Keshavan laughed at them, “Oh ! You people are so naive. This is the right time to put the screws on him. No manager will like a disruption during customer hours and will succumb easily.”

Thus, an entourage under the leadership of Keshavan entered the manager’s chamber.

The manager was startled and said, ”Why have you people left your seats. Go back and attend to the customers. We  can have our talk after 4.00 PM.”

Keshavan coolly said, “Narayanan Sir, we cannot work in such unbearably hot and humid conditions. So, nobody is leaving your chamber  until you agree to provide us with a generator and  some basic requirements to set up a canteen. I think our demands are quite justified.”

“You see Keshavan, Head Office will provide a generator only when we achieve the business targets set by them. As regards the canteen, we will get  subsidy only if there is a minimum of 20 employees.”

“Please don’t quote rules. I will tell you what to do. You can purchase the necessary items for canteen and get post-facto permission. As regards the generator, you have to persuade the higher-ups. Say it is for the benefit of the customers. Do I have to teach you everything?  But let me tell you one thing, if you don’t agree we are not going back to our seats.”

Narayanan wiped the beads of sweat from his face that had appeared more out of anxiety over the face-off with the employees than the heat. He was aware of Keshvan’s nature as a troublemaker and also his strong connections with the union leaders.

Narayanan had always been a hard worker and had  generally gone unnoticed, unlike some of his flamboyant colleagues who were leading easy lives. By nature, he was not very bold and forthcoming in his dealings with his superiors. Even though he  had been posted in many  remote areas, faraway from his state of domicile, he had never dared to complain.

Now after about 2 decades and  with only 5 years till retirement, he had been posted near his home. He very much wanted to complete the rest of his service here,  as he had no stamina left to shift to a new place.

He was aware that in case of any disruption in work, he would not get any support from the higher management. Rather, they would declare him incompetent and send him away to a remote place.

Finding no other alternative, Narayanan finally agreed, "Okay! Keshavan, you prepare the inventory for setting up the canteen as soon as possible. I will approve the expenses. I will also go to Head Office today to follow up the matter of the generator. Now, can you all please go back to your seats."

Coming out from the chamber, the employees were jubilant.

Keshavan puffed up his chest and said, " You see  friends, this is how you deal with the management."

The peon was all smiles when he  said to Keshavan, ”Anna ! I will go and come with your coffee and a bottle of cold water in a jiffy.”

All the other employees surrounded Keshavan and said , ”Anna, today after office is over, all of us want to  give you a big treat.”

Keshavan said, “No, No! We can have that some other day. Today I have some other engagements. ”

The crowded train journey back home that day somehow seemed very pleasant for Keshavan, as he visualized the events of the day.

When he reached home, he was very tired. But he was shocked to see that his house was locked.

"Where the hell has she gone now" he thought, irritated.

Then he opened the door with his spare key and entered the house.

On the coffee table he saw a folded sheet of paper. Opening it, he found it was a letter from his wife and started to read it.

“ …….I am going to my parents' house. Please don’t come running to fetch me. I have come to this decision after much thought. For so many years I have been  requesting you to purchase a battery inverter for our home. Time and again I have told you the sufferings I have had to endure  during power cuts in the afternoons. You also force me to wash your clothes every day, but when I ask for a washing machine, my request  does not reach your ears. I think my demands are justified. But you do not seem to take any notice. So I decided , enough is enough. When you are ready to  fulfill my demands,  give me a call  and I will come back. Otherwise don’t bother.  I am your wife, not your housemaid……..”

Keshavan flopped down on the couch, stunned.