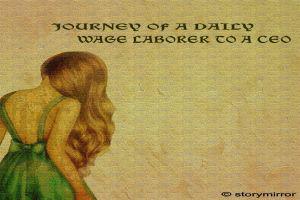 D. Anila Jyothi Reddy was born to an ordinary poor peasant in Narasimhula Gudem in Hanumakonda mandal. She was the eldest of four children and the extremity of poverty forced her to live a span of five years in a government orphanage BALASADAN. Jyothi studied hard and fared good marks with each passing year but unfortunately had to stop studying after the 10th standard.

As soon as she went back home, she was married since her parents could not afford her. She was at a tender age of only sixteen then. By the time she was eighteen, she was a mother of two daughters. Her financial condition at her husband’s house was no better. She started working as an agricultural labourer on daily wages and earned a meagre amount of Rs. 5 a day. She continued working for three years from 1986 to 1989. Her life was tough, but it changed when she joined a night school started by Nehru Yuvak Kendra (NYK) which intended to provide basic education to the villagers. The very fact that she was the only literate available in the village, they appointed her as a trainer with a salary of Rs. 150 per month.

Jyothi suddenly felt a spark within her and her passion for education had ignited again. She worked very hard and her sincerity and enthusiasm was recognised by the Inspection authorities. Very soon they appointed her as Mandal Prerak of Hanumakonda. Jyothi decided to educate herself further and completed her graduation and post graduation with Ambedkar Open University. She did not stop here and studied for B.Ed from Anna University. Now she was a government teacher.

Slowly but steadily, Jyothi’s life had grown better. While working as an inspector, she happened to meet one of her relatives who lived in the United States. As she spoke to him, she was impressed to know how different their lifestyle was. This inspired her to visit abroad so that she could give that kind of life to her daughters as well. Those days, getting US Visa wasn’t an easy task. After several failures, she somehow managed a visiting visa. Her difficulties did not end here.Upon reaching there, none of her relatives gave her shelter. However, she was accepted as a paying guest by an Indian family.

Jyothi started working as a sales girl with a video shop in “Movie Time.”  Her perseverance was noticed once again by an Indian and he helped her to get a better job as a recruiter in a company known by the name CSAMERICA. She was later selected by another company called ICSA with better wages. However she had to quit, since she did not have a permanent visa till then. Life was once again in turmoil. She managed her life with whatever kind of work that came by until she became eligible for her H1 Visa. Well, this was not the end. She went through a dreary experience all together to get her visa stamped. She had to spend months in Mexico to get the job done and after six long months she returned to the USA.

In May 2000, she became an entrepreneur with her own initiation called ‘Keys Software Solutions’. Her integrity without slightest apprehension was her ultimate investment for good fortune.

Today, Jyothi is a live example of supreme faith in oneself. She is an inspiration to several hundreds of such people who are trapped thinking that fortune is not in their favour. Jyothi has proven that one doesn’t need to be laden with exceptionally brilliant qualities. What one needs is aspiration combined with desperation along with the zest of perseverance to accomplish what seems impossible.

Jyothi Reddy is one of the live examples that prove “Possible lies within the word Impossible”.

Journey Of A Daily Wage Laborer To A Ceo