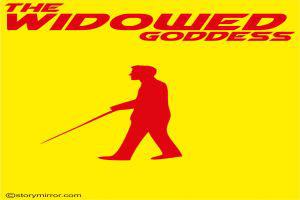 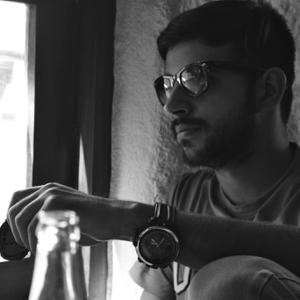 In the blazing gaze of a midday April sun, a little girl sits over that patchy, side way mud ground, her half face shimmering in the daylight and her jovial smile comforting her sweating face. She decorates her toy -- a clay statue of a Goddess. She has already given it a bath. Now, she's wiping it clean and dry. Speaking to herself and perhaps to it, she applies imaginary perfume and talcum on her idol. She hasn't chosen upon its dress yet. Yesterday it was the red chunariya, too big for the objective, yet done over it brilliantly. It belonged to Mem Sahib, from the big bungalow right across the road. It was hers perhaps; she had seen it over her shoulders when she got out of the car, with her child. Apparently, it was torn after getting entangled with some sharp edge of their smooth vehicle. The girl's mother was supposed to fix it whenever she sat down on her rusted sewing machine. She did, eventually, after slapping the back of the girl's head for playing with it.

The wind is strong today; a shirt, a pyjama, a bed sheet and a white chunariya are dangling and swaying just right above her head. After every a while, she rubs her elbow to wipe off her face clean and get the brown dusky hair strand behind her ear. And as she does this, every time, she, for that duration, shades her two year old brother who sleeps upon his stomach, unaware of the world and its processes. His tiny little fingers are closed into his thumb. Little black threads, fittingly wound on both his wrists are woven with tiny black pearls, semi dusted, but still speaking for their shine. He opens his lips in a while and gulps down at nothing in his sleep. Occasionally, he moves, but mostly to the tune change of the radio that is playing the local folk songs.

Their father, standing there with a naked upper torso folds the clothes accordingly after removing the creases off the clothes. The radio has always been there with him, always helped him work faster. The sun seems to burn his body, but his humming cools him down of both the heat and perhaps a pain.

And then, out of the blue, there is a shriek and a loud heart-shattering cry from the Mem Sahib's house. The girl's hands shake as she looks up to her father who in turn looks up to the house. The little boy still sleeps. In a while, they see the Mem Sahib running down the stairs, her husband following. She is disheveled and looks monstrous. On the way, out of the door, she picks up the guard's stick and rushes out of the door. She screams, “You killed her, witch,” and beats her chest. The little girl, whose eyes have been following her now, gets up in a jiffy and starts crying rushing to her father as she clasps on his pyjama.

Mem Sahib picks up a rock on the road and shoots at her. Her father gets her behind himself and folds his hands in a plea instantly.

"You killed my daughter,” she wails as she brings down the stick on the sides of her father, who is constantly begging and shifting to protect his little girl. Mem Sahib's husband tries to hold her hands, but lets them go as he breaks down too.

"Kya hua Mem Saab?” He too is crying now as his little girl is shrieking.

"Your little bitch killed my child, she killed my baby,” she sobs and gulps huge quantities of air and screams again.

The little boy wakes up and cries.

"Stop it Renuka,” her husband says in a feeble voice from behind.

“She killed our daughter, Madhav, she killed her,” she beats her chest now and pants. “She wore her clothes, this low cast, this wretched girl, this scoundrel, this witch,” she points at her with the stick and looks back to her husband with fiery red eyes. “She cursed her,” a bang on the legs of her father's right knee from the side. “She killed her. She did black magic on her Chunni,” another hard blow and this time on the left. And, then she dropped the stick slapping her head.

The girl's father is on his knees now.

Mem Sahib swings her hands wildly in the air and brings them hard on her chest.

She picks up the stick again and as she does that, the father picks up his son in his arms, catches at her daughter's wrist and runs on the street, away from them. The girl looks behind and sees his father’s shirt dangling and her goddess still sitting there quietly.

She hears the wading screams of Mem Sahib.

"Yes, run away, as far as you can or else I’ll kill you and hang myself.”

A hundred foot away, the retreating steps of the girl are still shaking. She doesn't want her father to lose his grip on her wrist. She has a strong feeling to look back, but she does not.

She wants, perhaps, a last glimpse of the house where, three days back, she sat in a row with other eight girls, low casts. She had got her feet washed by Mem Sahib and so did the other wretched girls. She got a good meal, a good bag, and hundred and one rupees, along with the other scoundrels. She was worshipped, as an embodiment of the Goddess she played with today, and so did the other witches.

She did exactly as she had been told, patting Mem Sahib and her daughter's head gently in the end, as a blessing.

She was happy that day. She was coyly moving her palm over the daughter's head.

Three hundred foot away from those little steps, a white chunariya, finally losing to the wind, falls upon the head of a toy, a bathed, scented, worshipped Goddess.