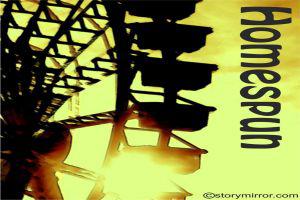 Of all the things that are made at homes- cakes, woollens, linens, music, pickles, pakodas,blogs, sweets, paper fans, and generosities, Mr. Jhunjhunwaala specialized in toys. He believed that the contention between the industry and the household, or, simply put, between the factory and the house can never be justified for the simple truth that the house houses families whereas factories are only concrete buttresses. The familial emotions are so much more subtle and untouchable compared to the clogged formality floating in warehouses.
He made toys not for a living. He made them for his closet. His unique closet faced the outside world, propped up in the porch, fronting the house, and displaying its characters. The bearded ape sat atop, his arms dancing over his head, and his teeth screeching at detractors. The puny weasel caught in the act of sneezing, the mouse sniffing at a ball of cotton, the couple in eternal embrace, the clockwork clown slapping his dish-like palms, and the astronaut waving off to his family before heading into oblivion were his other pieces of imagination turned palpable by his expertise. They were plucked from the newspapers, the gossips of strangers, the scenes happening in the street and from the flashes of uncalled for memories before being turned into solid masses.
Mr. Jhunjhunwaala would dust his old collections every morning before beginning. Then he would collect his equipment and take his seat in the porch to begin the day’s work. His radio, that had recently replaced his worn out gramophone, buzzed in the distance, but Mr. Jhunjhunwaala was content with only the sound of it. He would rarely lend any attention to what was being said or played, but if anyone turned off the sound, his eyes would snap instantly at the intrusion.
He would always be mystified with the amount of thought he put behind each character, lending it even the tiniest trait after much consideration. He liked to build his closet members carefully, lest he should forget any detail of any of his occupants. He liked them in full measure, looking out of his closet, intent, and to his mind, glorified.

He ran his fingers, tracing a curve in the pattern of his coconut oiled, tightly shaped, trimmed and sleek hair. He was acutely aware of the brushing of his freshly trimmed finger nails digging into his matted hair, and felt a certain repulsion at the feel of his skull standing guard against his fingertips, almost reproachfully.
As he admired himself before his mirror image, it passed for a moment in his mind that he looked, or rather, could have looked so much more pleasing, like all the other boys in Modern High School, and could have bettered each of them with his gleaming, watery eyes and perfect light-coloured skin. Instead, here he was looking at a mediocre, incorrigibly plain- another lad from another street come with his satchel strapped and bottle slung.
His school uniform looked as if every inch of it had been pasted on him, disgustingly neat and orderly even after recess. His tie was tugging at itself, trying its mightiest to somehow smother him. He tilted his head at the undone collar button, bashfully crouching beneath the double knot, held in its place by the exertions of the tie. It was his daily ritual to unfasten it after having escaped the jurisdiction of his fastidious mother.
He was not going to stand it.
The shining black of his shoe seemed to be a constant reminder of his subservience. Each time he bent over to pick something from the floor, or looked down submissively at the incessant ranting of his teachers, his view invariably fell on the symmetrical architecture of the perfectly aligned buttons, tie and his deep grey trousers, on the dove-like white of his socks peeping out- contrasted against the sheen of his black shoes- and, he imagined, screaming to the passers-by, announcing his imprisonment.

In many ways Manas was a prisoner too.

He brushed his hand roughly over his head, messing his hair. Displaced momentarily, his silk-like hair fell back to their accustomed place, like a swarm of flies converging back on the dung after a temporary disturbance. His stubborn nature was insidious, he decided, and it was commandeering his physical faculties too. Wetting his palms, he ransacked through his hair with both hands, his face convulsed under the surging resentment. At the end of the pillaging, he looked like the Manas who has just woken up in the morning, sleepy-eyed and dishevelled hair. That brought a smile to his lips. He loved the untouched natural Manas, before he was smeared by the pin-point precision of his mother’s practised hand. He began to hum his usual Raghu Dixit’s tune Hey Bhagwaan asking the lord to give him an option of restarting his life.
He wanted to be the raw Manas once again, the Manas standing at square one holding his head aloft, his watery eyes looking into the distance, proud of his impressionable mind, boasting of the voluminous receptivity of his being, wondering amusingly at the depth inside.

After days of goading, his mother, Mrs. Dutta, finally agreed to take him to the local fair with its thrilling rides.
Mrs. Dutta was a woman who carried herself haughtily. She enjoyed being indifferent- ignoring things, happenings and people around her, things that usually succeeded in drawing attention.
She liked to act a woman of business.
A woman of business, to her, remains prim and proper, and does the sort of things that is meticulously and, often arduously, accurate. She, being one, observed all the rules stringently. She carried bundles of notes of all denominations in her purple handbag so that she could produce exact amounts to the rickshaw-puller, the grocer and the doctor. She walked all the way to the milkman’s cowshed every morning and stood over the poor puny man as he milked his cow, overlooking acrimoniously with her eyebrows drawn in an unforgiving glare to make sure that not a droplet of water entered the utensil. She would always keep her kitchen adequately stocked. Nothing ever was wasted or wanted under her charge.
Unfortunately for Manas, his mother applied the same formula on him. His timetable was so crafted that after school he would only be able to catch his breath before being whisked away in his three-quarter jeans to his tuition classes. His health, his diet was paid such great attention that he had never tasted the toothsome food served in the plazas. Though he seldom fell ill, Manas could never recover from the heartache he suffered because of the excessive infringement in his personal space.
Manas had lesser friends than he had fingers. Once, when a kid in the neighbourhood tried to befriend him by inviting him to play a board game, it was his mother who saw to it that their friendship did not last long.
To her, Manas having too many friends would mean Manas wasting too much time. He was destined to follow his father, in becoming an economist, and she would not let any other interest or potential lead him astray. They were killed in their infancy. “You are a responsible child, Manas,” she used to say, “You know what is right and what is wrong.”
Her son’s new neighbourhood friend, the eccentric Mr. Jhunjhunwaala’s nephew, triggered a beacon of alarm in her mind. Manas was crossing deadlines in his timetable, appearing late for lunch, disappearing at bed time only to be found playing crossword with his new found friend. As a result, his mother initiated a fresh propaganda. Whenever the poor boy would come calling for Manas, she at once denied that Manas was in the house at all, sometimes even when a morose Manas was visible in the background. She increased the study hours in his schedule and forbade him to leave the house after tuition hours. His friend began to lose interest in the neighbourhood kid who always seemed to be hiding behind his mother’s skirt. There was nothing Manas could do about it.
An alarming fact had taken root in his mind. He considered himself to be more vulnerable than any of his companions in school, susceptible to the invisible trappings of the world. That was why, he explained to himself, his mother had to take such precautions.
Sometimes, when Manas saw kids of his age acting unruly, getting expelled or faring poorly in studies, he would feel an infinite sense of security in his mind. He knew, under his mother’s watchful presence, he would never experience such a fate. It was these singular moments that always restored his faith in his mother’s idiosyncrasies.
He was like a bee shut in a shell, safe, aptly fed and unharmed, but without the ability to draw nectar from his life.


Manas had been wanting to visit the fair for a long time. However, his mother’s tight timetable didn’t allow her the space for such excursions, and there was no way Manas could go to the fair on his own.
When finally his mother agreed to squeeze out time for the trip, Manas was overjoyed. He jumped and frolicked as he waited beside the motor car for his mother to descend from the house. Mr. Jhunjhunwaala peered at him from his perch across the street, and called out, “What’s the occasion?” “Hello, Mr. Jhunjhunwaala, it’s a family excursion to the local fair, a rare outing!” Mr. Jhunjhunwaala smiled inwardly and nodded almost imperceptibly before returning his gaze to the half-finished train engine.
Manas remembered the last time he had been into the house across the street.
Mrs. Dutta and Mr. Jhunjhunwaala had not spoken to each other after that incident. Manas had been playing with Mr. Jhunjhunwaala’s nephew in the anteroom towards the back of the house. Mrs. Dutta, on finding her son absent at the dinner table, barged into his house and barked at Manas to appear for dinner at once. Being submissive by nature, Manas quietly consented and left the game. As they reached the porch, Mr. Jhunjhunwaala accosted Mrs. Dutta. He was carrying a packet of pastries he had just brought from the local bakery meaning to have a little snack with Manas and his nephew. He politely asked Mrs. Dutta, “What is the hurry? Come and join us for a little snack,” he offered. The ruckus that Mrs. Dutta created consequently and the protests uttered out by Mr. Jhunjhunwaala earned the time for Manas to loiter a little longer in the porch. He turned a deaf ear to the furore and patiently observed the various toys neatly arranged in the closet. He was particularly amused by the sneezing weasel, and he stared at it with his nose against the glass, oblivious to the raised voices parrying somewhere.
On that very moment, in the sheltered front of the house, the moment lingered a little longer than any moment usually does. With the elderly pair arguing and the innocent boy lost in his own thoughts, everything seemed slowed down; stretched. For an unknown observer, it might have seemed that the roles of Mr. Jhunjhunwaala and Mrs. Dutta merged into each other, while Manas and the toys were, somehow, fused. It was as if there were two entities, not four, each lost in his own distractions, connected to each other by a very thin and delicate string, and as if no other existence mattered.

Of all the things that are made at homes- cakes, woollens, linens, music, pickles, pakodas,blogs, sweets, paper fans, and generosities, Mr. Jhunjhunwaala and his neighbour Mrs. Dutta, specialized in toys.