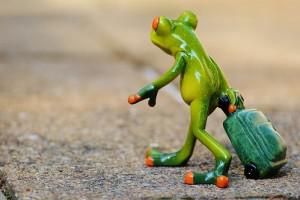 Once upon a time there was a frog called Kuku. He didn’t like to jump. He always walked. His parents were worried about him as he never jumped. They thought that their son was handicapped. His friends didn’t consider him a part of their group as they thought a frog cannot be considered a frog until he jumps. He stayed all alone and played alone the entire day. He missed his friends and family but, he could do nothing as they did not consider him a frog.

Every year in the Mishi Lake a long jump and high jump competition was organized by all the frog community. The one, who wins, is awarded and respected in the whole community. Kuku’s father always aspired to win the competition but as he has grown old now he could not participate. He wished his son could jump well and win the competition. But his son was not interested in jumping. So before the day of competition, his father called Kuku. He gave him delicious flies to eat. Kuku was very happy as he thought his father has changed and accepted him with his choices.

As Kuku was busy eating flies, his father took a sharp pin and pierced Kuku’s back. Kuku jumped high because of the pain caused by the prick. As he landed down, with tears in his eyes he asked his dad “why did you do this?” His father said “I wanted you to realize your true potential. See, you jumped so high”. His father requested him to participate in the competition. Kuku wiped his tears and accepted his father’s request. Next day the competition started. Kuku gave his best in the competition but due to lack of interest in the field he did not win.

After the results were announced Kuku was sitting disappointed when his father approached him. His father said to Kuku “you disappointed me son”. Kuku apologized for the failure but explained that it was not his cup of tea. His father was a bit angry and again pricked his back. Kuku shouted out of pain. His father said “This is your punishment”. Kuku stood up angrily and said “parents like you want to fulfill their own dreams using their kids. You pressured me to take part even though you knew I would fail. I went to the competition just for your interest then too instead of appreciating me you hurt me again. This is like pushing your child to do what he hates and then pushing him to win what you like, where is my choice in my life”. His father felt Kuku’s words and realized what he was doing was wrong.

He apologized to Kuku and promised him to allow him live his life according to his own wish. Later Kuku introduced speed walking competition and taught all the frogs and motivated to try something different. Everyone started enjoying walking and they all appreciated Kuku. There is a Kuku in all of us. So don’t do what you don’t like. The world is here to push you on their way, but you should make your own.